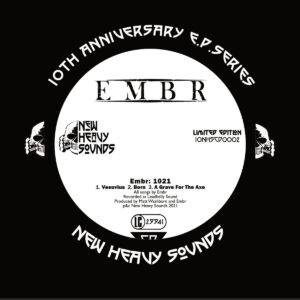 A year on, their ‘1023’ EP is every bit as immense, and ‘Vesuvius’ in particular, announces the band’s return in classic style, whipping up a relatively fast tempo contrasted with the kind of heaviness you’d expect from a stoner/doom band. Fairly quickly, the distorted and slightly sludgy sound calls back to Black Moth and the more melodic end of Witch Mountain, while always sounding like the EMBR you’ve always loved. The riffs are impressive from the outset – and even more so once a heavier mid-section is reached – but, as before, the vocals remain the most striking element of the band’s sound. In contrast to the audio sledgehammer reawakening the very best in doomy grooves, Crystal Bigelow’s vocals are clean, very accessible and almost haunting. The way she’s able to deliver the longer notes with ease is immediately striking; the way she combines an almost bluesy cry with an impassioned howl, even more so, and a light use of echo and effects only helps to accentuate the melody’s other-worldly qualities. She’s by no means a one dimensional performer, either: at the point where the riffs reach their peak, she trades in the more melodic sounds for scratchy black metal rasps, suggesting that EMBR could easily transition into something much heavier at the drop of a hat.

Delving into something even more intense, ‘Born’ begins with a heavily distorted bass throwing out notes at a funereal pace, every one highlighting the dirtiest edge of Alan Light’s playing, before everything is swamped by a heavy as hell guitar part, with Mark Buchanan chugging at half speed. Underscored by a pounding drum, this is the EMBR machine in full grind, never caring to temper the doom, only aiming for full-scale weight of a riff – and succeeding with aplomb. It’s so heavy that there are times where you’d wonder how Crystal’s voice could hold firm, but with some multi-tracking of a counter harmony, the occasional growl and a distinctive trill, she puts in something of a career defining performance. The later part of the number shifts gears, albeit briefly, allowing time enough for Buchanan to offer a classic metal riff with more of a groove before everything settles into a doom and goth hybrid that sounds like the UK’s (much missed) Black Moth in full flight. It could be a contender for one of the best EMBR tracks to date, at least until ‘A Grave For The Axe’ finally lends the EP something a little quirkier. It’s no less heavy – in fact, parts of it could seen be darker still, thanks to a world of applied distortion and an even deeper bass – but an uneasy marriage of classic doom riffs with throat-rawing growls contrasting with the clean, female cries reinforce the greatness in the band’s heavy hybrid sound, whilst occasional busier riffs almost lend something of a carny atmosphere. There’s more of a focus on a death metal influenced counter vocal, making this seem even more intense; Erik Bigelow’s drums carry a pleasingly live sound, accentuating more of a natural feel, and the sludgiest elements of the chorus are a welcome throwback to the band’s cover of Soundgarden’s ‘Mailman’, making this another unmissable tour-de-force of heaviness. It’s another performance that’s end to end great, but it’s also a piece where repeated listens will reap greater rewards.

For those who’ve enjoyed previous EMBR recordings, ‘1021’ will certainly deliver more riff-oriented gold. Some of this material is even more intense than before, yet somehow without sacrificing too much of the band’s brilliant and dark melodic core. If this EP proves anything, it’s that the band have not only survived a pandemic lockdown, but a closed world and a growing anxiety seems to have made them even stronger.