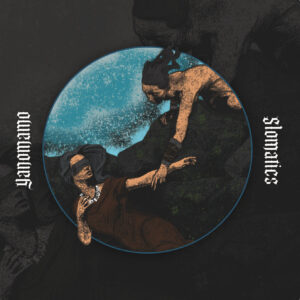 Issued by the Australian doom/sludge label Iommium Records, the Yanomamo/Slomatics collab is chiefly a vehicle to further highlight the work of Aussies Yanomamo to a wider audience by pairing them with a bigger name act. As split releases go, the coupling of bands and tracks really couldn’t be better. Yanomamo’s previously unavailable offering ‘Dig 2 Graves’ is absolutely brutal. Across an absolutely uncompromising six minutes, the band grumbles and lurches, throwing out slow and swampy riffs against a pounding drum beat at a funereal pace. Given time to adjust, there’s far more at stake here than unrelenting noise, of course. Those listeners willing to invest more time attuning to the riffs will discover some absolutely killer bass fills from the wonderfully named Clarence Albatross as he busies himself beneath the swamp, and a deep and spooky interlude accentuates an important gothic tone to the whole piece. In the main, though, it is about the all-round heaviness – and in that respect, Yanomamo really don’t disappoint in their delivery of slow and grinding riffs, especially since they’re occasionally tempered by brief echoes of Tony Iommi’s pioneering doom blues sound. Once you’ve factored in frontman Scott Tabone’s abilities to channel the most threatening hardcore/melodic death growl, this becomes a mini masterpiece of doom/sludge.

Despite Slomatics being the “name” band here and potentially the bigger draw, at the time of this release, most fans will have owned ‘Griefhound’ for years, in one form or other. The version included here isn’t the famous recording from their 2007 LP ‘Kalceanna’, though, but a take on the old track that might actually be superior. Stripped of some of the earlier take’s vocal distortion, this rendition takes on a much more traditional doom blues vibe, especially with the echo applied to the drums and vocals throughout. Despite sounding a lot cleaner – and by association, far more accessible – fans will be pleased to note that it isn’t actually less heavy. The riffs come with an intensive weight throughout, like the best of Iommi played at half speed, making this sound like Slomatics covering an Electric Wizard classic. With no concessions to complex guitar solos or any real deviations from the original monolithic riff and only the briefest of multi-layered guitar work used to create something of an understated climax (if, indeed, something so heavy could be called understated), this is peak Slomatics. If you’re a fan of the 2007 take, this will certainly provide a welcome alternative.

If you’re thinking of picking up this release for the Slomatics track, there’s every chance you could become a Yanomamo fan in the process. Between them, these recordings creates an insanely heavy experience; a more uncompromising barrage of noise on one 7” you’re unlikely to find. Other splits may be more inclusive to a broader range of metalheads, but this represents peak intensity – a sludge/doom essential.