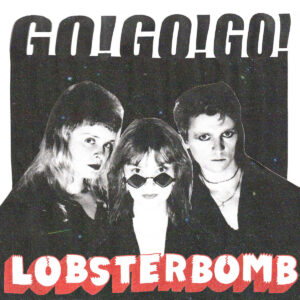 Formed in Germany during the Coronavirus lockdown of 2020, Lobsterbomb have an intense sound and positive spirit that combats the negative vibe of the time in which their first songs were written. By combining the lower budget end of the early Yeah Yeah Yeahs sound and the unrestrained yelping of Katie Jane Garside, they hit upon a classic garage punk sound, and after releasing a trio of digital singles in fairly quick succession during the first quarter of 2021, they connected with an audience of like-minded DIY music fans. Although there wasn’t necessarily much in the way of originality in the sound itself, in terms of rousing an energy and an ability to deliver a lyric or two that seemed more self-aware than most, these recordings more than hit the mark.

The band were quick to capitalise on the tracks by reissuing them as part of their debut EP ‘Go! Go! Go!’ at the end of July ’21, but in some ways, this was a smart move since a couple of them were too good to be left as stand-alone files destined to be lost somewhere within peoples’ ever growing digital collections. Furthermore, with so many of the band’s songs centring around themes of rebuilding, inner strength and personal growth, the opportunity of hearing them together creates something that’s actually stronger than the sum of its parts.

Kicking off with ‘Yes Yes Yeah’, the EP wastes no time in showing off Lobsterbomb’s raw sound in its purest form when a cymbal-less drum riff underscores a clanging guitar sound, almost like Mo Tucker has stepped in on a session with The White Stripes while an old school Riot Grrrl vocal screams with a fantastic sense of attitude. Naturally, everything values volume over perfection, but the stylistic choice is perfectly suited to job in hand. What’s particularly interesting here is that the style of vocal immediately suggests anger and yet the lyrics are at the other end of the scale, with the protagonist asking a significant other to join them in the park, to have coffee and basically embark on a new adventure. It’s surprising how much weight this carries when recounted with the kind of attitude more befitting of a sloganeering anthem, not to mention the underlying theme of freedom being contrasted with the realities of a pandemic lockdown at the time of its writing. The relationship doesn’t seem to endure, but that doesn’r matter; for a brief moment in time, its celebrated with a taut riff and the kind of sharp, garage punk aggression that taps perfectly into an almost timeless sound. Going deeper into a straight garage punk sound, ‘Wake Up’ fully exploits a set of clanging chords against a crashing drum part, and the way vocalist Nico Rosch forces her voice throughout for maximum effect calls back to US greats like the Red Aunts, though without ever feeling like a direct copy. If it were unclear before, the trio’s abilities to lock down an intensive garage groove are without question, and on this track in particular, the way guitarist Crayon Jones collides with Vik Chi’s relentless drumming more than sets up the core of a great and trashy sound that many have striven for but few have captured so intensely. What’s more, it supplies the release with something much deeper, having been even more inspired by the motony of a lockdown lifestyle during the time of Covid-19. Against the hard edged riff, we’re warned that “tomorrow has to pay, or we fall” if we somehow don’t “recreate what has been broken for all”. The sadness and feeling of potential loss is occasionally at odds with an intensive and shouty vocal but, again, the track’s ability to capture Lobsterbomb’s brand of retro garage punk in full flight is almost perfect.

Far less tuneful, ‘Ready To Go’ trades in some of the band’s trashier aspects for a mid-tempo jangle that comes across as slightly flat. Any relative lack of musical interest is made up for by a vocal performance that’s even shoutier than before, and perhaps due to Nico’s sheer volume it can seem a little hard going on first listen. However, a little time unveils a track that’s just a little deeper than those first impressions suggest, with a lyric about getting away and finding the abilty to remove yourself from the daily humdrum, while a main refrain utilising a world of backing vocals to fill space actually supplies one of the EP’s best hooks. …And they know it too; the release’s title wasn’t just pulled out of thin air. Stretching out even more, ‘Monster’ offers a much deeper guitar sound from Jones as he leads the band through a much darker, almost gothy arrangement with touches of early Bauhaus colouring the typical garage rock tropes. It’s the only Lobsterbomb track to involve minor chords and a guitar solo, which instinctively makes everything feel more centred around the music itself. However, armed with a lyric concerning the importance of confronting your inner demons and contrasting that with a shrieked and wordless hook, Nico is far from taking the backseat here. In some ways, it’s great to heat the band branching out into more serious moods, but as good as this is, it definitely feels like the EP’s black sheep – an oddity that might always be divisive, musically – but those who like it will quite possibly love it.

Pretty much an anthem for all of Lobsterbomb’s musical interests, ‘I Want Noise’ is, rather perversely, far more tuneful than the bulk of their work, showcasing more of an indie jangle throughout and stoking up the bottom end to add a little more warmth. The mid tempo groove that’s quickly set in place demonstrates the trio’s tight approach to simple arrangements, and a multi-layered vocal in place of a guitar solo further explores a deeper desire to stretch their garage punk parameters in more interesting ways than many would dare. If you’ve been immediately attracted by noisier affairs like ‘Yes Yes Yeah’, then this’ll certainly become a firm favourite before long.

The time of Corona brought a lot of negativity – not least of all a raft of cancelled gigs – but it also had its positive side, allowing creative types more time to reach inside themselves for inspiration, and in allowing new projects to get off the ground. If not for that, we might not have been given Lobsterbomb…a band who certainly sound like they’ll get better, should time and circumstances allow. In the meantime, as far as debut recordings go, this is gloriously raucous. Lo-fi without sounding cheap, but still DIY oriented enough to attract those who’ve no interest in commerciality, ‘Go! Go! Go!’ is one of 2021’s most exciting garage punk releases, hands down.