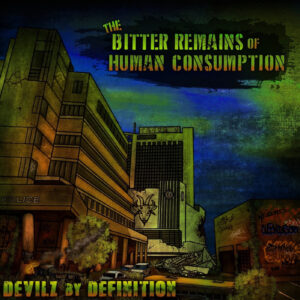 The arrival of ‘The Bitter Remains of Human Consumption’ marks the end of a near five year silence from Devilz By Definition. However, within about twenty seconds of hitting the play button on their 2021 EP, it’s clear that they’re not approaching their return in a half-arsed way. The lead track ‘Time Is Near’ absolutely thunders from the speakers with a perfect blend that combines twenty first century thrash and groove metal with a metalcore attitude. Moving through a barrage of jagged and intensely heavy riffs, the band show a huge love for Lamb of God and the more melodic end of DevilDriver, often showcasing a really tight musical symmetry between guitarists J. Couvillon and B. Munro as they use their sharp style to lock into T. Robert’s drum groove.

This instantly sets up a truly forceful sound, and any Lamb of God comparisons are made even easier once S. Mailloux steps up to the mic, unleashing a throaty roar that’s almost the equal of Randy Blythe himself. But, despite the obvious pilfering, the track still sounds amazing; taking on board a perfectly executed solo, a few understated horsey squeals and a slower post-chorus breakdown adding slightly more of a hardcore mood, across these three minutes, there’s a little of everything you’d expect from the style. With a bigger sound and less compressed production values than their previous release (2016’s ‘The Devilution’), it’s clear that by the time this first track is done and dusted, the band aren’t just back, they’re set to absolutely smash the opposition and become the true kings of the Canadian underground scene.

By grabbing a hold of a slightly extended arrangement, ‘Peace By Piece’ is even better. Working a lengthy intro for full atmosphere where a half buried speech tells of “life being a puzzle”, the band manages to fuse an emo styled emotion to something that feels indebted to a late 80s thrash disc, marrying the past and present very effectively. The main body of the arrangement thrusts the listener back into a safe space where the overall feel of ‘Resolution’ era Lamb of God is hard to ignore, but as before, the playing is first rate and when applying a sledgehammer hook to an equally heavy riff, Mailloux sounds like a great frontman. With a heavily wah-ed lead guitar on hand to fill a short solo and some fantastic pneumatics present during the second half of the track, it actually becomes really hard to forget that it isn’t actually a Lamb of God deep cut, but the obvious influence doesn’t ever weaken its impact. Last up, ‘The Bitter Remains’ takes a bit of a left turn at first by presenting a slower, yet still chunky riff that draws its influence from a heavy, almost trad metal sound. Beneath the distortion and sludge, keener eared listeners might spot something that’s not that far removed from Judas Priest circa those overlooked Ripper Owens years, but the arrival of a vocal shifts everything back to business as usual. Although playing within a comfort zone, it’s yet another example of a great band at work. The interplay between the twin guitars is really tight; the commitment to a genuine groove places this among the best groove metal tracks and, overall, the Devilz show a real affinity for their chosen heavy sound.

It’s best to ignore the dodgy artwork that somehow resembles something that Municipal Waste and Overkill would have rejected in 1990, and the band’s misguided fascination with z’s – another weird throwback to the big hair years of hard rock’s more carefree days – and just appreciate this EP for the tunes themselves. From a musical standpoint, this cannot be faulted; although it could be seen as a little generic in places, there’s a lot about the band’s command of a riff and sheer power that’s really satisfying. There’s just as much of a classic feel cutting through the throaty vocal, and everything combined, Devilz By Definition create the kind of heavy powerhouse that fans of the style will love in a heartbeat. This is highly recommended metal – don’t miss it!