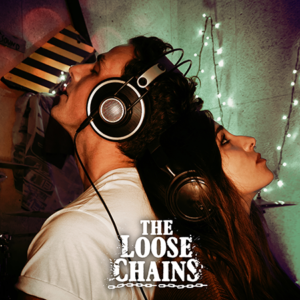 A new band for 2020, The Loose Chains brings together the talents of drummer Sergio Benedi (previously of the band Gunpowder) and singer songwriter Jimina Villena, a performer who has previously shared her recordings on social media. With a really meaty sound and a couple of hook laden rock numbers, this debut release marks a huge step forward for both artists.

The Loose Chains’ sound takes in a lot of 90s alternative influences for its core, but dresses them a little differently, often suggesting a broad range of musical interests. ‘What Can I Do?’ – a track chosen to make that all important first impression – kicks off with echoing vocals and a thin guitar. With Jimina’s accent taking on a huge presence, there’s a feeling that this might drop into something poppy huge Euro flair, but pretty quickly, the reality suggests otherwise. A massive guitar riff settling somewhere between the heavier end of the melodic rock spectrum and a punchy power pop groove takes the weight, while Villena’s voice rises from the previous breathy and poppy delivery to a full scale rock cry. The overall sound is huge. It immediately takes the listener straight back to those post-grunge days of 1997, and by the time the punchy arrangement drops into a jagged hook where the vocals take on the mantra of something mixing a cheerleader chant with hard rock chops, it’s obvious that this is the kind of tune that’ll get better with each successive spin.

In terms of “a classic, melodic style”, Jimina doesn’t have a traditional rock voice. Instead, she often employs a sultry edge that sometimes sounds more like it would fit with pop or indie bands, but somehow it works. Once you’ve adjusted to a very heavy accent, she has the presence of a great performer, and this comes through even more clearly on ‘Earphones’. Opening with more of a garage rock vibe with really loud drums, it shows yet another side to the duo’s talents before quickly blossoming into a huge rocker that takes the core of an alternative 90s sound and mixes it with an older, classic rock confidence. The verses are hard and display more than a bit of attitude, before it’s all change again when, sliding into the chorus, there’s a great melodicism at play. Vallena sounds very natural and the multi-tracked music represents more of an AOR side. There’s a feeling that somewhere between the toughness and melody, this is the sound that UK rockers The Autumn Killers were aiming for on their debut EP, but failing miserably. Moving back into the heavier verse, the push and pull between the styles immediately creates a brilliant tension, but that really comes to a head once a vocal hook of “shut the fuck up” collides with a punchy groove, before moving into an instrumental break where some very grungy guitars take centre stage. Despite only clocking in at three and a half minutes, this track is a genuine melting pot of influences and ideas. Perhaps more impressively, none of these changes in mood ever suggest a cut ‘n’ paste vibe – everything shifts back and forth so naturally, you’ll quickly believe The Loose Chains’ own claims that they’re not a band to be pigeonholed.

This act may be a duo and these first songs may have been recorded during lockdown, but there’s nothing about this recording – even on first impressions – that feels demo-like, cheap, or incomplete. Despite great efforts to mix things up, their sound might not be one hundred percent original, but these songs deliver in terms of both riffs and hooks, creating a short listen that should appeal to a broad spectrum of rock fans. There’s more than enough here to suggest the beginnings of a great partnership.