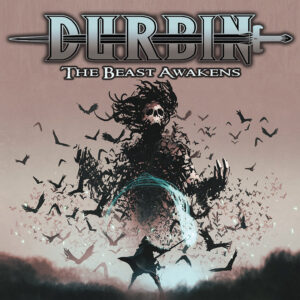 ‘The Beast Awakens’ is a celebration of Durbin’s very old fashioned metal tastes and it’s the kind of record that would certainly appeal to rock and metal fans whose similar tastes got stuck somewhere around 1987. For most other listeners, the album will likely be little more than a hopelessly out of time distraction. Its shameless old style approach is evident right from the off when ‘The Prince of Metal’ thunders from the speakers like an old Judas Priest tune. It’s got a great riff, to be fair, and the way its interspersed with a bit of extra power metal bombast lends a bit more of a welcome edge. Unfortunately, any musical credit flies straight out of the window upon reaching the chorus, where Durbin’s relatively melodic vocal rises into a sub-Halford squeal. It smacks of a man trying far too hard. To make matters worse, he delivers one of the worst, clichéd lyrics ever. When inviting everyone to “raise your horns and bang your head” like “the prince of metal”, Durbin throws out lyrics that would have been relatively cringe inducing in the mid 80s; by 2021, they sound utterly ridiculous. On the plus side, there’s some smart playing from former Dokken/Malmsteen bass man Barry Sparks, but it isn’t enough to save face.

Similarly awful, ‘By The Horns’ stokes up the fantasy stance with lyrics about “glowing eyes” and “facing the overlord”. When delivered in full on macho mode, it all becomes rather silly and the fact that the bulk of the melody is little more than a blatant steal from Priest’s ‘The Sentinel’ makes it sound like a basic parody instead of the loving and retro work Durbin aims for. Again, a couple of great solos never really make up for the gut clenching embarrassment of everything else, but James seems happy enough in his own little (musically irrelevant) bubble. Despite stealing a Judas Priest song title almost lock-stock, it’s Durbin’s fascinations with Dio that are made blatantly obvious throughout ‘Riders On The Wind’, where the riff from ‘Heaven & Hell’ is paraded against a set of average, fantasy themed lyrics. If approached with low expectations, it passes five minutes of entertainment and – as is often the case, his hired session band plays very well – but there’s always a nagging feeling that time would be better spent with a proper Dio LP instead. ‘Rise To Valhalla’, meanwhile, is the kind of macho, squealing power-metal-by-numbers that Chris Impellitteri actually does far better, despite his work often being similarly misjudged. Although it isn’t as bad as ‘Prince of Metal’, it’s probably best avoided by all but the most foolhardy or artistically tone-deaf.

So, with all of that out of the way, is there anything genuinely worth hearing on this record? As it turns out, there are a handful of relatively strong old school workouts. Durbin sounds much better when taking more of a melodic rock path, and on ‘Battle Cry’ his best attempts at fusing more of an AOR melody with a trad metal power results in one of the best Dokken tunes you’ve never heard. It features some great multi-layered guitar sounds against a really upfront bass riff which, coupled with a quieter vocal on the verse, brings something that’s both muscular and melodic. With only a little unnecessary squealing on the chorus causing a slight wobble, it’s the album’s true standout.

With a much dirtier riff used brilliantly throughout, the title track offers some solid trad metal that falls somewhere between Judas Priest circa 1984 and one of Dio’s grungier recordings from the 90s. Throughout the verse, James curls his voice in a way that gives him a huge presence – pretty much spot on for the job in hand – and with a stormer of a guitar solo included en route, it easily becomes another of the album’s best tracks, despite a slightly misjudged shift into Halford territory on the chorus once again. Another standout, ‘Calling Out For Midnight’ definitely best demonstrates the whole band’s ability to pull together on a high octane performance. With crashing drums and a riff that’s isn’t a basic Priest knock-off, its four minutes never lets up. Falling somewhere between classic Dokken and ‘Nature of The Beast’ era Impellitteri (though very obviously better), it demonstrates a genuine punch in record time. Applying the vocal prowess of peak Mark Slaughter to create something even bigger, this track is the full package in terms of brilliant, no-nonsense old style metal. It has very little relevance to its time of release in 2021, of course, but with a tightly wound performance, driven by some great drumming and a decent hook – taking in a massive and brilliant solo along the way – it shows what Durbin and his friends can do when they really try.

Also worth hearing, although perhaps more out of curiosity, ‘The Sacred Mountain’ is another of Durbin’s tributes to Dio and, as suggested by the title, it’s not a subtle affair. That said, it has a little more flair than ‘Riders On The Wind’. Taking a mid tempo chugger of a riff, the band fly head first into a tune that allows James to over-pronounce words like “castle” and “titan” in the manner of the diminutive legend on verses that are bigger on borrowing than any genuine spark. Luckily, a much more AOR inflected chorus lifts everything and with a combination of power and harmony, helping the performance shift into something more interesting.

With three or four very strong tracks smothered by a hell of a lot of retro bombast, ‘The Beast Awakens’ is a very uneven affair to say the least, but in some ways you have to admire James for sticking to his guns and wanting to carve a career from such an old fashioned style. When it works, it works well, but there are chunks of this record where his leather trousers seem just a little too…sweaty…and his choice of lyric just too clichéd to be taken seriously. Durbin has a more than reasonable voice and his hired hands – as proven at various points on this hit and miss disc – can handle a broad range of metal styles with ease. With that in mind, it’s a pity that iffy/unintentionally funny songwriting has a habit of letting the side down. Still, it’s all played with conviction, and for some listeners – specifically those who wish most metal still sounded like Judas Priest and Helloween and obviously never considered lyrics to be that important – that’ll be enough. For the more sophisticated and discerning metalhead, however, it’ll certainly be an album to be approached more cautiously.