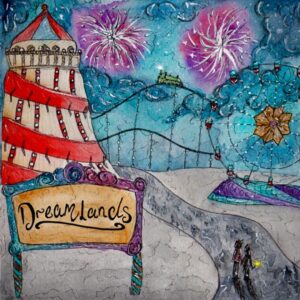 Back in 2019, Daydream Runaways released a brilliant indie pop single called ‘Closing The Line’. The track set them up as a very accessible band; their music showed parallels with a lot of radio-friendly fare like The Killers and the vastly overlooked Ghosts, but the song also showed a more mature and thoughtful side by featuring a lyric that lamented the closure of the Honda factory in Swindon. The music wasn’t strikingly original – very little is, or even needs to be – but their performance demonstrated a genuine knack for slick rock-pop.

If nothing else, that single promised great things for the future and this EP – released in November 2020 – offers three more slices of greatness. The lead track, ‘Fairytale Scene’ shows the band in a much more energised frame of mind as it kicks off with a high speed indie rock jangle akin to classic, early Arctic Monkeys, before settling into a verse where muted guitar chops and ringing sounds jostle against a vocal that values presence over melody. As before, there’s plenty within the delivery that echoes Jim Kerr circa 1980, but there’s also an extra edge. The genuine breakneck pace of the verse almost makes Ben Heathcoate’s voice take on the role of extra instrumentation, but it’s a perfect fit for the high energy riff that’s quickly been set in motion. Guitarist Cameron Bianchi is firmly in the driving seat throughout and the way he’s able to switch from that opening high octane salvo from the intro and chorus to a funkier groove for the track’s instrumental breakdown pretty much seamlessly shows a natural talent. Factor in a great lyric about chasing your desires and it asserts itself as one of the band’s best tunes to date.

Slowing down, ‘Light The Spark’ favours a mid-tempo groove and although it seems less interesting on first listen, the song eventually grows to become another fine piece of guitar driven pop. The way the band choose to latch onto a solid 4/4 rhythm doesn’t stretch their talents, but the more spacious music allows Ben’s voice a little more room to express itself. He chooses a laconic Brandon Flowers-esque approach throughout the track – an odd move, especially since he’s given a fairly blank canvas to work with – but what the performance appears to lack emotively is more than makes up for melodically. At the heart of the performance, their familiar indie-pop sounds like something that could’ve easily been spawned from any time during the previous twenty years, but it’s to Daydream Runaways’ credit that they make it all sound so contemporary at the time of release. The closing number, ‘Crazy Stupid Love’ works a fantastically simple guitar riff that rises and falls throughout a quiet intro, before the band drops into a 90s influenced jangler that pushes Nath Heathcoate’s bass to the fore. It’s here that the band’s retro qualities firmly win out. The lyric is said to be inspired by the teen comedies of their youth, but more than that, the bulk of the arrangement truly sounds like a deep cut from Semisonic or Dishwalla. If you ever had any liking of those American soundtrack fillers back in the day, there’s plenty to love here from a musical standpoint.

These three tracks give a deeper insight into a band who are growing in confidence at every turn and if you enjoy commercial guitar driven pop, each performance should bring something of interest. Music snobs may well sneer at the influence from bands like Maximo Park and The Killers – all so often informing the fringes of the Daydream Runaways sound – but at the end of it all, these guys are great songwriters and ‘Dreamlands’ presents one further step towards a major breakthrough.