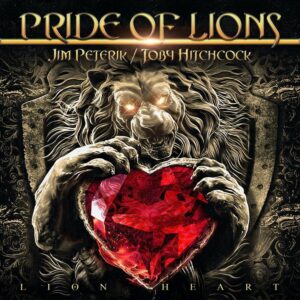 Unfortunately – or perhaps, rather expectedly – Pride of Lions’ sixth release ‘Lion Heart’ presents the listener with approximately another hour of pure bombast. Its dozen songs aren’t short of big hooks or some fine musical passages, but the majority of them are so smothered by Peterik and Hitchcock’s massive posturing and their constant desire for big to become bigger (or often even bigger than that) just becomes overbearing.

The title cut is a great opener, at least musically. Pulsing keys evoke some great 80s sounds; clean guitar tones bolster a massive retro sound and Peterik can be heard clearly steering the band in a retro direction that’s very welcome. Like a lot of the previous Pride of Lions material, though, it becomes irksome once Hitchcock starts to sing. He tackles the whole number at full volume, as if he’s on stage and booming to a musical theatre crowd. The lyrical content, too, relies so heavily on theatrical tropes that the whole thing doesn’t really work as the opener on a “rock record”. And so the bulk of the album continues with the same obvious flaws: ‘Good Thing Gone’ teases with some great keyboard work, only to be wrecked by a human foghorn (even a great chorus can’t rescue this – Hitchcock’s bombast sucks all melody from even the greatest “whoah”s); ‘You’re Not A Prisoner’ features some pleasing chunky guitar riffs but a solid tune is left to do battle with a vocal that would’ve already been too loud even before someone decided it should dominate the end mix, and ‘Rock & Roll Boom Town’ fuses a pedestrian guitar chug and laborious rhythm section with a vocal that’s pure theatre. With things scaling up from big to bigger, the band should seem suitably energised, but everyone just sounds thoroughly bored. Even worse – and actually quite silly if you start to overthink it – ‘Flagship’ kicks off with vocal bombast befitting of a rock musical, moves through passages of pompy keys and once settled on a reasonable AOR riff is subsequently mauled to death by a roaring vocal that sounds like it was meant for something else.

…And then there’s the obligatory big ballad. ‘Unfinished Heart’ unashamedly goes for a massive power ballad style that’s perhaps best associated with Jennifer Rush in 1985. It just about enough musical interest to see things through effectively – the soaring guitars supplied by Mike Aquino are lovely, as is Petrik’s more restrained keyboard work – but Hitchcock’s constant desire to become melodic rock’s answer to Michael Ball can be somewhat irritating.

This album’s only real saviours come from a few AOR tunes that obviously tip the hat to the 80s and Peterik’s glory days with Survivor. ‘Heart of The Warrior’ features enough stabbing keyboards and 80s sheen you might even believe it to be a leftover from the classic ‘When Seconds Count’ LP. Boasting a pre-chorus that’s loaded with harmonies. That at least takes some of the focus away from Hitchcock’s incessant booming, while the chorus teases with a couple of melodies straight from the classic ‘Caught In The Game’. Assuming you’re able to overlook some of the fairly ridiculous lyrical content (fighting, strength and protection are all very much in evidence), it’s a decent enough melodic rocker. The album’s only true standout, ‘Sleeping With A Memory’ pushes a lot of the right buttons from an AOR perspective. Right from the intro, where Peterik plays a descending scale that’s culled from at least seventeen melodic rock classics (and specifically Foreigner’s ‘Waiting For A Girl Like You’), there’s a feeling it’ll be good. Coupling a decent riff with a punchy mid tempo rhythm, the track continues to sound like a classic you’ve always known, and when tackling a few quieter, lower registers, even Hitchcock seems to finally understand that less is more. The combination of a well written song and some joyful harmonies makes it worth hearing, but both tracks are outdone by ‘We Play For Free’, with a full compliment of stabbed keyboard sounds, a short but intensive solo and a world of over-familiar melodies. There are times when Hitchcock could probably benefit from using a little less volume, but he makes up for smothering the verses by injecting far more melody into a great chorus. The chorus itself is a natural winner due to it brazenly being ripped off from an old Desmond Child melody or six, but over familiar as it is, it’s still by far the best that ‘Lion Heart’ has to offer.

There are few melodic rock bands as frustrating as Pride of Lions. Peterik can still clearly write songs, but desires towards the theatrical all too often spoil what could’ve been great AOR, and although Hitchcock obviously has a strong voice, his tendency to overuse it as often as possible is really tiring. With three or four great tracks hidden somewhere among too much pompous bluster, ‘Lion Heart’ is at least fifty percent better than 2017’s ‘Fearless’, but for most listeners, an EP’s worth of decent songs won’t necessarily make it worth shelling out for.