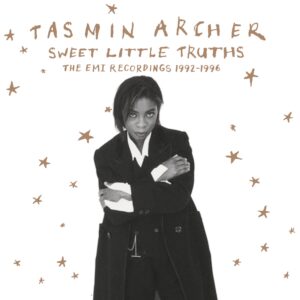 For anyone interested in a box set of Tasmin’s recordings, 1992’s ‘Great Expectations’ will require no introduction. However, hearing it as part of a larger body of work, its surprising how great it sounds decades on, and also how varied its songs are. ‘Arianne’, in particular, is among the best radio hits of the era showing off a fine vocal range, often coming closer to a later Kim Wilde tune than the more soulful artistes Archer was oft compared; the warm adult sounds of ‘When It Comes Down To It’ fall somewhere between Oleta Adams and James Taylor with an easy cool that highlights a fine acoustic guitar and piano blend; the aching ‘Ripped Inside’ moves effortlessly between moody balladry and full-scale cry and ‘Lords of The New Church’ adds some tasteful slide guitar work, equalling the Texas hits of the day. ‘In Your Care’ remains an effortless mix of soul and pop and although the way Archer pushes her voice for extremes on the chorus remains one of its most striking features, there’s some really cool upright bass lurking throughout. In terms of deeper album cuts, ‘Steeltown’ is arguably the album’s weak link sounding like a proto-M People, but a more thoughtful lyric concerning the closing of industry elevates it above the pop tat it at first seems.

Better than most of those, the verse of ‘Halfway To Heaven’ appears to take various cues from Simple Minds circa 1991 and melds them to something Mr. Mister would have offered after the hits dried up, and ‘Hero’ – a song that never gets mentioned – couldn’t be farther from the perceived Tasmin Archer sound if it tried. The multi-layered vocals and hard piano sounds driving the song’s chorus evoke Langer/Winstanley productions of the 80s, while the verse slips into flawless AOR where shimmering guitar lines underscore another fine vocal. Even ‘Sleeping Satellite’, a song you probably once wished you’d never hear again, really shines. The vocal melody is as familiar as it’s always been, but paying closer attention to the musical arrangement, it’s full of lovely keyboard flourishes and although the production values date it squarely within the early 90s, it actually doesn’t sound too dated.

By the time Archer returned with her second album ‘Bloom’ in 1996, the musical landscape had changed. Britpop was in full swing; EMI had considered Blur, Supergrass and Radiohead among their priorities and Tasmin had started to slip from people’s memories. EMI didn’t even want to release the album and considered it not commercial enough – at least not in the way it eventually appeared. Archer had to fight for her artistic integrity. She won, but at a cost: ‘Bloom’ didn’t get the promotion it deserved and yielded no hit singles, resulting in a record that went unnoticed by most.

This is a pity, as ‘Bloom’ is an interesting prospect. Moving on from the shiny pop sound of ‘Great Expectations’, the record has a far more organic quality. Producer Mitchell Froom often gives the material a solidly old style rock/pop sound, resulting in the guitar led ‘Sweet Little Truths’ coming across like one of Meredith Brooks’s more understated tunes, or the rattling ‘I Like It So’ sounding far more like something you’d discover within the Paula Cole or Joan Osborne catalogues, but Archer’s voice is unmistakable. In direct comparison to, say, ‘Arianne’, she’s often pulling back and opting for an earthier presence, but there’s still a natural beauty within every one of the album’s performances.

‘Breaking My Back’ is a particular highlight capturing Archer amid a moody refrain, affecting a deep croon that’s a world away from the purest cry of her debut; the aching ‘Give In With Grace’ sounds like a cross between Aimee Mann in a sultry mood and Roberta Flack, while ‘One Good Night Out With The Boys’ sounds more like a Pretenders album cut than anything that’d previously been “typically” Tasmin. No matter the style, though, the vocals are on point throughout. By midway through ‘One Good Night’ (the album’s fourth track), the shiny and radio oriented sounds of ‘Great Expectations’ become a fading memory and you’ll even start to wonder if these moodier tunes were the true sound of Tasmin Archer all along.

With ‘Rain Falling’ placing a soulful cry against a warm bassline and echoing guitar, the listener is again thrown into something that sounds a hell of a lot like Aimee Mann, while Froom’s sparing production really makes a feature of reverb and echo. On the production front, ‘Memory’ is an especially quirky number that gives away the fact that Froom is in the chair, as poly-rhythmic grooves hint at bits from his solo recordings, as well as sounding like a darker take on something from his then-wife Suzanne Vega’s ‘99.9F’. ‘Bloom’ is one of those albums that won’t necessarily click first time, but when it does, you’ll want to hear it several times over; each time, paying closer attention to the mechanics of everything. It’s easy to see why those wanting tunes like ‘Sleeping Satellite’ and ‘In Your Care’ a second time might have been thrown, of course. ‘Bloom’ is a very different beast. It belongs on any list of “overlooked classics”, and with its release as part of this anthology, it certainly deserves to win some extra love.

In addition to showcasing the much overlooked ‘Bloom’, this set gives pride of place to the essential ‘Shipbuilding’ EP, where Archer puts her own spin on four tunes from the Elvis Costello back catalogue. The EP crept into the UK top 40 upon release in 1994, but has scarcely been celebrated since. This is a great pity, since Tasmin’s quartet of Elvis picks are musically ripe and with ‘Shipbuilding’ especially showing off a slightly bluesier side to her voice, it’s a great listen – certainly far better than that whiny little dirge by Robert Wyatt that so many people seem keen to fawn over. ‘All Grown Up’ (originally from Costello’s oft maligned ‘Mighty Like A Rose’ LP) is perfect in its simplicity. A strident piano takes the weight of the torch song arrangement while Archer reaches within herself, delivering some truly impressive lower registers. ‘New Amsterdam’ at first sounds as if it’s taken at a slower pace, but after a couple of bars it becomes clear the body of the song is played pretty straight save for a few tinkling keyboards accentuating a carny-like melody. The main melody allows Archer to explore the full range of her voice – and again, a few lower notes add the most impressive elements – but, interestingly here, her session band outshine her best efforts filling the coda with a brilliant instrumental workout that draws more from a 70s rock vibe than Costello surely would have intended. The highlight of the Costello set, though, is undoubtedly the version of ‘Deep Dark Truthful Mirror’. The complex lyrical arrangement allows Archer to really stretch her voice in both range and volume, while a fine bassline and huge organ swirls lend the music a very 70s quality that seems far richer than the mid 80s landscape that soundtracked the time in which the song was written. If you were one of those people who heard ‘Sleeping Satellite’ in 1992 and immediately wrote off Archer as a lightweight pop star, you owe it to yourself to listen to this recording immediately.

Other bonus materials include a plethora of extended versions and remixes (from the original CD singles) which are nice to have if that’s your sort of thing. More important are the selection of live recordings which really get across the fact that Archer was more than a studio moulded talent. Among the half dozen live cuts, you’ll find a faultless rendition of ‘Bloom’s ‘Rain Falling’ and a superior version of ‘Man At The Window’ (a song which appeared in a different form on the b-side of ‘Sleeping Satellite’), both of which make this box worth investing in even if you already own the two main albums. Another essential extra is the rare recording of ‘Itchicoo Park’ which sticks firmly to the Small Faces arrangement, but strips it back to showcase some brushed, jazzy drums, some heavily reverbed guitar sounds to give it a spacy feel and a sparse, almost clanky delivery. In contrast to all of this is Archer’s voice which is rich and dominant throughout. It isn’t the most inventive cover in the world – Tori Amos reworking Hendrix’s ‘If 6 Was 9’ on a broken upright piano will surely take some beating – but there’s just enough of a new slant here for Archer to have made it her own.

Archer’s early years gained her a Brit Award, seemingly endless radio play and a lot of attention. A couple of quiet spells broke momentum and, ultimately, that didn’t help her career in the long term, but this collection shows why she shone so brightly…at least for a time. More than a few nostalgic hits, this box is a great celebration of one of adult pop’s most sophisticated female songwriters since Joan Armatrading and Kirsty MacColl hit their peak. ‘Sweet Little Truths: The EMI Years’ is the kind of box that – in an ideal world – should thrust Tasmin’s early work back into the spotlight. However, even if it merely reminds people that there was more to her in the 90s than ‘Sleeping Satellite’ then its work is done.