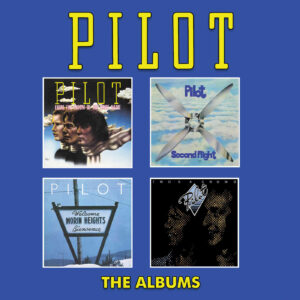 Leading off this anthology, 1974’s ‘From The Album of The Same Name’ presents a mixed bag of sounds, but it’s best bits are fantastic. Lead track ‘Just A Smile’ (one of their lesser remembered hits) rests somewhere near the pinnacle of 70s pop, thanks to a set of radio friendly harmonies and a barrage of handclaps, but there’s also a great power from a somewhat understated 60s jangle. What’s interesting revisiting the album, decades on, is how many styles they wedge into two sides of plastic, almost as if Paton and keysman Billy Lyall arrived together with an encyclopaedic knowledge of pop and more than a bit of studio expertise. ‘Lucky For Some’ almost sounds like something Roger Daltrey would have tucked away on one of his solo records with it’s heavily strummed guitars, mid-tempo plod and music hall piano interlude; ‘Lovely Lady’ isn’t shy in flaunting a cheesy samba and with a simple hook, a compliment of strings and a lilting vocal, it occasionally falls in line with a deep cut from Wings, and ‘Sky Blue’ shows off a knack for an MOR ballad with smooth harmonies and even more strings. This could even be a different band to that that gave their all on the two major single releases.

‘Don’t Speak Loudly’ throws in theatrical falsetto vocals against a gloriously 70s backdrop, taking Pilot’s excesses to their most extreme, but although it tries very hard to eclipse half of the record, it’s got nothing on ‘Sooner or Later’, a genuinely classic tune. Foreshadowing both the complex pop of Andrew Gold and AM radio sounds of a solo Bob Welch with its complex style, it’s very much an overlooked number. Easily of equal quality to ‘Magic’, it’s every reason why Pilot were great when heard at the top of their game and with the use of stabbed piano chords and prominent lead guitar, it more than lends the band’s pop chops a decent edge. On the downside, the rumpty-tumpty of ‘The Girl Next Door’ aims for a McCartney-esque pop style but ends up more like something you’d find from Gilbert O’Sullivan in a less than inspiring mood and ‘Over The Moon’s oompah band rhythm smacks of TV variety show filler and is fairly nasty. ‘From The Album…’ might not be the most consistent record of the 70s but when the magic strikes (no pun intended), its best parts show off some gifted song writing and impressive musicianship. Anyone looking to dig beyond the hits could do worse than begin their Pilot explorations here.

With 1975’s ‘Second Flight’, Pilot’s ranks expanded with the permanent addition of guitarist Ian Bairnson, but musically, works very much on a theory that “you can’t fix what ain’t broke”. ‘January’ provides every reason alone to own a copy, but with at least five tunes of almost equal strength, it’s another album that deserves revisiting. ‘Do Me Good’ is an instant standout with a world of darker guitar sounds jostling against a very structured rhythm, occasionally sounding like Chicago channelling ‘…And Then There Were Three…’ era Genesis. A strident piano, excellent lead guitar work and a flawless vocal show a band with great and ever-growing confidence. The equally adventurous ‘55 Degrees North’ somehow fuses disco tropes with the analogue sounds of Schools & Colleges library music, but once you get over the amusement of that, its many layers and ideas sort of show how/why Paton and Bairnson later became involved with prog musicians. The complexities of the final arrangement constantly bounce in and out of some obtuse keys, while ‘Heard It All’ taps into perfect 70s pop-rock – all rollocking piano lines and handclaps applied to various guitar interludes on loan from 10cc. For anyone who’s heard and loved ‘Magic’ and ‘January’ and ventured no further, there’s an instant joy to be discovered here. Classic Pilot, ‘You’re My Number 1’ applies a mid tempo groove to sharp strings, handclaps and a world of wonky analogue synths that sound as if they’re warming up for a TV quiz show theme. That would be enough to make the track a workable piece of power pop, but a selection of multi-layered guitars in an ELO style and yet more shimmering pop vocals ensures greatness.

Again, there are a couple of obvious clunkers among the gold (the music hall light entertainment of ‘Passion Piece’ is a contender for “worst Pilot song ever”, especially considering all vocals adopt silly tones and muted trumpets sound like kazoos, and ‘Love Is’, whilst never terrible, is just too much like another Gilbert O’Sullivan pastiche), but when heard in tandem with the debut, ‘Second Flight’ brings more than enough entertainment.

With 1976’s ‘Morin Heights’, the band felt as if a bit of a rejuvenation were needed and with Queen riding high off the back of their career-defining ‘A Night At The Opera’ album, they called upon producer Roy Thomas Baker. Baker had worked extensively with Queen and was already a Pilot fan, so it seemed like a great match. …And indeed, ‘Morin Heights’ turned out to be a strong album. Unfortunately, the record buying public seemed less convinced and Pilot failed to trouble either the UK singles or album chart. It would be the public’s loss when numbers as fine as ‘Hold On’ (a clavichord driven funk rocker worthy of Lone Star circa 1977) and ‘Canada’ (the Wings hit that never was) would not become better known. Even when digging deeper into the album, moodier tracks like ‘Trembling’, a psudo-prog number that carries hints of Steve Hackett’s solo work or Camel circa ‘Breathless’, more than shows Pilot absolutely flying during this period of growth.

Elsewhere, ‘The Mover’ takes the guts of Pilot’s earlier slick pop and gives it a hefty shake with more clavichord grooves; ‘Lies & Lies’ shows perfect 70s pop underscored by some fantastic lead bass, quirky stereo splits and some very natural lead guitar, and even and even ‘Running Water’ (a fairly pedestrian 70s ballad when measured against the rest of the LP) suggests that even Pilot’s most saccharine moments could really benefit from Baker’s studio mastery.

Unheard by most, ‘Morin Heights’ is Pilot’s masterpiece and Baker’s production is never short of brilliant. The large scale vision to which he’d become accustomed (thanks to a couple of years spent in the company of Queen) certainly suited Paton and Bairnson’s best work – it always embellished rather than smothered their signature sound. It wasn’t a commercial success, and with Queen, ELO, Supertramp and 10cc riding high at the time, it seemed there was no longer room for these Scottish pop heroes. If you’ve never heard ‘Morin Heights’, there’s never been a better time than now to put that right. The failure of ‘Morin Heights’ meant that the label lost faith in Pilot, and both Bairnson and Paton took to session work (both would work extensively with Alan Parsons; Paton joined Elton John).

Both musicians reconvened for 1977’s ‘Two’s a Crowd’ (produced by Parsons and released only in Japan) which captured some greatness, but isn’t quite the follow up ‘Morin Heights’ truly deserved. Part of the album’s more sedate feel has almost everything to do with the absence of Baker in the producer’s chair rather than any missing musicians. Scaling everything back to the sound of ‘Second Flight’, lead track ‘Get Up & Go’ is perfect Pilot in bouncy pop mode and even though there’s a feeling that they’ve done it all before on tracks like ‘You’re My No. 1’, there’s still a lot of listening pleasure, especially with a track so loaded with multi-tracked guitars. Equally lovely, the softer ‘Evil Eye’ places a slightly accented vocal against a bank of tinkly keyboards and wine bar friendly lead guitars and while there are plenty of elements that show Pilot’s perfect pop off nicely, the uninitiated will almost certainly hear traces of McCartney/Wings and an almost floaty grandiosity that isn’t always a million miles from the poppier end of the Alan Parsons stuff. In unashamed “70s cheese” mode, the big ballad ‘Monday Tuesday’ has a pleasant musical mood where synths and strings set up something very smooth. It’s a pity such music couldn’t be used for something better, as a slightly irritating vocal really lets things down. Even then, there’s something here that’s worthy of joining a couple of the other Pilot ballads, especially once a mournful bassoon steps out for a solo. Yes, it’s all very much “of its time”, but if you’ve made it this far in the Pilot catalogue, that’s certainly won’t bother you.

At other times, ‘Two’s a Crowd’ happily dances between the Pilot-on-autopilot of ‘Big Screen Kill’ (a brilliant, though predictable slice of mid-tempo grandness), lounge pop a la Bob Welch (‘There’s A Place’) and heady funk-pop (‘Do Or Die’, very much an album highlight) and, of course, there’s the obligatory more theatrical nod in ‘Ten Feet Tall’. What there isn’t is any sense of Bairnson and Paton reaching out and trying anything new. Everything on the album seems very much within a comfort zone and for that reason, this LP will often feel like it’s playing second fiddle to ‘Second Flight’. Although it is, perhaps, more consistent, it lacks the higher highs of material like ‘January’.

It would be easy to blame the arrival of punk and changing musical fashions for ‘Two’s a Crowd’s total lack of distribution, but that would be too simplistic. After all, 10cc were still releasing great pop-rock material in the UK and pop genius Andrew Gold scored a massive hit with ‘Lonely Boy’, a complex piece of pop that has a fair bit in common with Pilot’s bigger sounding songs like ‘January’ and ‘Canada’. In many ways, ‘Two’s A Crowd’ deserved a bigger chance at success – especially when, looking at the material in isolation, it’s as good as ‘From The Album of The Same Name’ and easily better than the worst bits of ‘Second Flight’.

This box set is almost certainly the final word on Pilot’s short career. It isn’t all top drawer material but between the hits, misses and a selection of interesting album cuts, there’s enough to draw in any interested parties…and at an “impulse purchase” price. With the inclusion of the Japanese-only album and a nicely put together booklet, both the curious listener and the band’s the biggest fans – assuming they’re still out there – should find it invaluable.