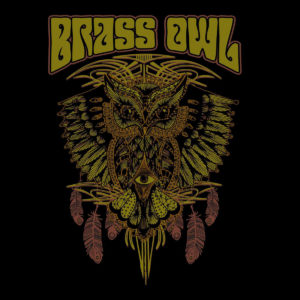 Brass Owl unleashed their self-titled debut album in the summer of 2018. While that record was loaded with great riffs and showed promise, it was also fatally flawed. More than great riffs are needed to create great songs and their song writing wasn’t always the most memorable. Also, in frontman Brian Tarter, the band seemed to be hampered by a vocalist who often…overstretched himself.

Unfortunately, since Tarter also supplies those great guitar riffs and actually represents fifty percent of the band on 2020’s ‘State of Mind’, Brass Owl are sort of stuck with him. As a result, it is another album where a massive amount of promise is evident, but the genuine quality doesn’t always come through.

The album’s opening track, ‘Land Shark’ shows off plenty of the band’s finest traits in that it’s quite heavy, but also maintains a solid bluesy sound throughout the main riff. Listeners will almost certainly detect a strong Hendrix influence – and particularly from ‘Manic Depression’, which has obviously lent this track its hefty swing throughout. In between the Hendrix-isms, there are traces of a heavy stoner style which lends Brass Owl a proper southern attitude. With a great riff – borrowed or otherwise – Brass Owl sound like a veritable force…and then Tarter starts to sing. As before, the big issue comes with his insistence on projecting the voice he wishes he had, rather than properly using the voice he’s actually got. He growls and wails with a real intent and a lot of enthusiasm, but his tendency for over-reaching for huge, long notes that he can’t deliver often make for a difficult listen. Thankfully, the music continues to be first rate for the style with the guitars grinding and chugging, until eventually retreating to allow a quieter lead break to introduce a fine, howling blues tone. Aside from the vocals, this is a solid opening statement that shows how Brass Owl are masters of a groove.

In a change of mood, ‘Deuce Face’ casts aside the blues rock for a swampy unease colliding with grungier sounds that come close to sounding like an old Alice In Chains tune. The multi-layered vocals are a welcome move as the gruff harmonies draw focus away from an otherwise iffy lead, but again, the music is where it’s really at, and Brass Owl’s love of Zakk Wylde, Jerry Cantrell and a world of stoner rock collides within a solid sound. Shifting into something quieter, ‘Hook Line and Sinker’ features a verse that occasionally leans more towards good old ZZ Top thrills than anything too swampy or grungy, while a muted guitar tone lends a distinctive melody. Faced with not having to make himself heard above a bloody massive dirty blues groove, Tarter sounds much better too. Moving into the chorus, a fuzzy, heavier riff takes over…and then disappears almost as quickly. It seems everyone forgot a write a chorus, but between a great verse and a very naturalistic solo, this track has more than enough to claim a place as the album’s highlight. …And those chorus shortcomings eventually reveal themselves to be deliberate once the expected big hook pulls a great track to a close.

After relatively strong beginnings, ‘Stay Trendy – No Filter’ is a disgusting mess. A spacious blues rock stomper, it gives drummer Lonnie Buckley far more room for manoeuvre and he attacks his kit with a real force. Unfortunately, the ‘No Filter’ part of the title appears to reference the fact that this recording is presented with a no frills production and Brass Owl sound as if they’ve invited you to a rehearsal. For some bands – notably The Dead Exs, Vamanos! and The White Stripes – such a stark and real sound can be a plus. For Brass Owl, this isn’t the case: what little melody the music carries is played as if the duo still aren’t completely sure the track is complete/ready for public consumption and Tarter’s vocals sound as if a man loaded on Jack Daniel’s has grabbed a hold of the microphone. Best avoided, this marks a new low for Brass Owl and shouldn’t have been included on this disc. It undoes a huge amount of goodwill. Much better, ‘Side Effect’ shows off Brass Owl’s quieter side once more, with cleaner guitars taking the lead. Tarter’s gravelly voice moves towards something more preferable, but will remain an acquired taste for most, but overall, this tune’s blend of Molly Hatchet and Black Stone Cherry is fairly solid. It doesn’t quite equal the first couple of tracks for intensity or excitement but its best features go some way to bringing up the quality level of the album as a whole.

Initially, ‘Jive Turkey’ sets itself up to be the album’s best track as it adopts a bluesy swagger akin to a Blues Traveler classic. This quickly shows how well the duo can really hit a timeless groove; when playing at speed, the two men sound as if they’re having a blast. Pretty much everything about the music is great and, interestingly, so is Tarter’s voice – just for once, he’s using the right voice and volume for the job in hand. If there’s any evidence of Brass Owl having a greatness that’s in danger of being hidden, it can be found within these two minutes…and then, everything subsides into an ugly, grungy swamp. With everything reduced to a boring dirge, Tarter reverts to his preferred drawl. From such great beginnings, the second half of ‘Jive Turkey’ is just nasty. Suffering a similar cut ‘n’ paste mishap, ‘Pale Horse’ throws some great speed driven southern rock vibes in the middle of a plodding bore-fest, potentially wasting Buckley’s most exciting rhythm work.

When ‘State of Mind’ hits the spot, everything sounds like a musical leap from the debut: the fantastic riff from ‘Land Shark’, the melodic flair of ‘Jive Turkey’s first half and the grunge callbacks during ‘Deuce Face’ suggest there is talent at the heart of this record. With a concession to less being more – and perhaps by including a cover in a heavy blues style to reel in new listeners – this could have been a killer EP. Sadly, as it stands, with a vocal that tries far too hard and a couple of tracks that really miss the mark, it’s an incredibly uneven offering.