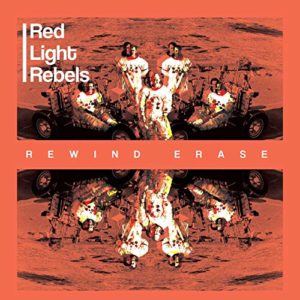 Two years on from their ‘Joyride’ full length, Red Light Rebels sound as if they truly mean business on their ‘Rewind Erase’ EP. It isn’t really that the band have toughened up, or even changed their sound dramatically; it’s more a case of everyone sounding ever more confident as their musical journey progresses. Having long established their sound and put in some hard yards on the live circuit supporting The Ataris, Teenage Bottlerocket, Swingin’ Utters and others, on ‘Rewind Erase’, these Gloucestershire based lads present their finest studio recordings to date.

Starting with one of the harder and faster tunes, the title track delivers a mix of pop-punk and melodic hardcore’s familiar traits and chooses to play things straight at first, offering speed driven riffs that are instantly familiar. The lead guitar work attacks with a real intent, as Tom’s playing very much revisits the tough yet melodic charm of early Rise Against, but if anything stands out, it’s the way Ryan’s lead vocals retain the same level of grit as the band’s American counterparts but isn’t shy of letting his English accent cut through in places. This seems to give the track even more urgency when set against a barrage of whoahs, before everything steps up a gear for an instrumental break where the general bounce is replaced by choppier rhythms and, eventually, a few bars of slower and more intensive chugging. It’s a fantastic start, but unbelievably, this EP has a couple of even better numbers up its sleeve.

Having tackled something fairly complex and gained listeners’ full attentions, ‘Dead To Me’ drops into an arrangement that’s closer to classic pop punk, mixing elements of early Sum 41 with classic MxPx, creating some classic punk sounds in the process. The arrival of a dual vocal between Ryan and Tom lends a further urgency, but the music definitely continues to dominate. With a few fantastic lead guitar flourishes adding plenty of colour and the use of stops on a tough chorus proving especially catchy, it keeps up the momentum, before ‘Call To Arms’ brings much more of the same, often sounding like a mix of Sum 41 on a massively hooky chorus and Rise Against via some particularly tough riffs. Between a brilliantly played guitar solo that isn’t shy of a few nods to old school metal and a fantastic speed-oriented bassline that chooses to reveal itself further with each listen, it further shows how RLR are a cut above a lot of DIY bands. ‘Perfect (The Last Chapter)’ shows no signs of this release running out of steam as stokes up the melodic hardcore elements beneath an already tough and driving riff. A world of gang vocals is on hand to accentuate the feeling of tough yet melodic charm, but it’s a strong twin lead riff used as opening bait and a few more nods to The Ataris that really appeal. Had this band come along a couple of decades earlier and been from California, RLR would be the kind of band a couple of major labels would’ve fallen over themselves to sign.

Showing off the band’s talents in a hugely appealing way, the EP’s closer ‘Let Go’ is a genuinely epic tune that begins with a world of hard and fast pop-punk traits, often making RLR sound like a mix of MxPx and Face To Face. The riffs are sharp and, as before, the production values are amazing for a DIY release; the vocals are assured and the first couple of minutes pass in a blur of pop-punk perfection. At the point you suspect the song is over, the Rebels strike up once more, delivering a world of ringing lead guitar sounds over a slower, more aggressive riff, complimented by a selection of whoahs that might make The Offspring seem non-committal. Finally, returning to the original riff for one last round of an especially rousing chorus, RLR bow out with speed and with their recycling of classic pop-punk/melodic punk sounds showing no signs of weakness.

Throughout ‘Rewind Erase’, Red Light Rebels take influences from a few key bands – most obviously The Ataris, Rise Against and Strike Anywhere – and use those to deliver a short burst of melodic punk perfection. If you still love punk with huge choruses, a dose of skate, traces of melodic hardcore, but above all, punk that keeps a close ear on those vitally important catchy melodies, this EP will hit the spot, right from first listen…and sound better with each play. With ‘Rewind Erase’, fans – old and new – are thrown straight back into the late 90s with a knowing smile, but retro pop-punk sounds rarely sounded so good. Grab this download at the earliest opportunity – you won’t regret it.