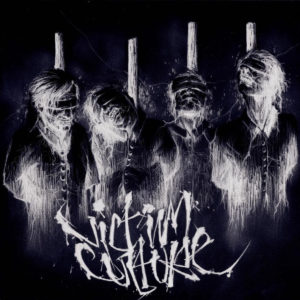 Naming themselves after a Gallows song, it should come as no surprise that Denver’s Victim Culture hone a sound that owes a great debt to that much loved UK/Canadian hardcore outfit. This debut album is tough and raw; it’s overall sound carrying the brickbats of a stomping hardcore sound that fuses a metallic chug with rousing street punk choruses.

Their chosen style is obvious right from the off, with ‘OMDB’ never shy in the way it uses slower, almost crushing guitar sounds to get a basic yet forceful riff across. If it’s feel-good melodies you’re after – even in punk terms – it’s time to look elsewhere. The anger in the performance is quickly reinforced by a throat-rawing shout; frontman Zach Hill (g/vox) comes across as a force of nature both in the way he uses his voice and guitar as the core of the Victim Culture sound. What makes it a potentially strong opening statement, especially for first time listeners, is the way the time signature shifts repeatedly. The partially slow verse and sledgehammer instrumental breakdowns are contrasted by a rousing chorus where the band latch onto shouty street punk vocals, with a nod to the UK’s divisive Oi! scene. The way the speed lurches back and forth means it’s not always an easy punk listen, but if you find any interest here, the other seven tracks are certainly worth hearing.

Mixing grinding guitar sounds with an unsettling post-hardcore noise, the dual vocal assault of ‘Noose’ shows off some severely unhinged anger. It partially fits with various other hardcore bands of at the time of release, especially with a superb riff filling an instrumental coda, but there’s something in the absolutely unhinged vocal performances that has the potential to set it apart from the crowd. The end results are not just set within extreme hardcore, but also take in influence from noise-rock experimentalists from the 90s. Those with broad tastes and long memories will almost hear just as much influence from Jesus Lizard and Craw alongside Glassjaw et al. Again, kudos to Victim Culture for pushing a few boundaries – there’s some especially good work from the rhythm section throughout – but it’s hard work if not approached with a tough frame of mind. ‘Night After Night’, meanwhile, shows off a great drum sound and driving riff, but an insistence on applying a gang vocal to an off-kilter discord in the early part of the number makes it a very unsettling listen. By the time everyone drops into a bass-drum heavy Sick of It All inspired groove there’s improvement; lead guitar furies fall against a grinding backdrop adding extra interest, but this is one of those hardcore tracks where the band’s musical abilities outshine the song itself. Luckily, ‘Broken Teeth’ provides the perfect counterpart. Lighter in tone but still retaining a genuine punch, this number fuses the speed-driven antics of Rancid with the kind of lead guitar motifs you might find on a No Fun At All record. Those who love hardcore in it’s purer states might find this a little…frivolous…especially since one of the vocal parts sounds a little like The Lawrence Arms, but a second vocal featuring some pretty hefty, throaty moments ensures this is no pop-punk filler. In fact, such a strong combination of punky styles could even make it the EP’s highlight.

Another standout,’Suit Up’ begins with a terrific drum fill, before exploding into a full throttle hardcore assault that showcases both great guitar work and some big sounding production values. The dual vocals, once again, entertain in an aggressive call and response style, before a shredding lead guitar ups the ante for all-round raucousness. If it were ever in doubt how much this band loves Gallows – and especially their ‘Orchestra of Wolves’ material – this track proclaims that love like a beacon of blinding brightness, or perhaps a tattooed fist of solidarity. ‘The Void’ creates moodiness by presenting a solo guitar before exploding into a heavy hardcore frenzy that applies some of the previous Victim Culture traits to a concrete groove that borrows influence from Mongol Horde. The combination of riffs and voice shows off the band’s talents without the need to attempt anything too complex or clever. On the flipside, ‘Hostel’ is pretty hard going in parts due to a grindy riff that can be quite jarring, unless of course you’re well versed in lots of post-hardcore from the Revelation stable. A faster punky section lifts the mood, but obviously not for too long. This is one of those tracks that perhaps would have worked better with a bigger hook… It’s definitely the dictionary definition of a mood piece, even in hardcore terms. Last up, ‘Bled Out’ thrills with a monstrous bass groove and solid drums at the outset, before delving into some straight up hardcore that blends the screamo elements of Gallows with a pinch of Comeback Kid styled aggro. During the fastest breakdowns everything works well, if it doesn’t necessarily expand on the moods of previous tracks. It would have been more interesting if that bass part hadn’t have been heard first, as it means that everything seems to peak a little too early. Still, in terms of solid and familiar hardcore, it’s fine even if it doesn’t reach the peaks of ‘Suit Up’ or ‘The Void’.

The combination of New York styled hardcore and old-school UK street punk on show here will appeal to fans of Gallows, but ‘Victim Culture’ (both the band and album) shouldn’t necessarily always to be approached casually by a broader contingent of punk fans. If there’s such a thing as a punk/hardcore record that needs to be heard in the right mood or not at all, this is almost certainly it. It’s hard, fast and short. It’s not always the most consistent release, but full marks for effort, though, since Victim Culture know how to make an impression…