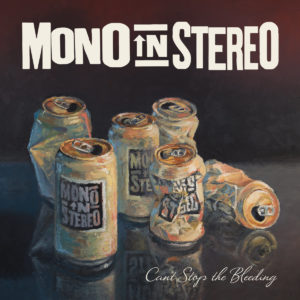 The opening track wastes no time in dropping the listener into the band’s trashier elements, when ‘The Conversation’ kicks things off sounding like something inspired by The Replacements‘ ‘Let It Be’ crossed with something a touch punkier. On a tune absolutely loaded with dirty, semi-punked up guitar riffs, Mono In Stereo quickly show their strengths. By balancing the noisier bits with a few muted chords, a smattering of power pop and a simple counter vocal, they also show how they also value depth within an arrangement. With at least four different aspects vying for your attention, it’s a surprisingly full sounding number, but Mono In Stereo make it sound so natural. ‘Different Kind of Man’ changes the mood and the band shows a real gift for power pop with a New Jersey edge. The blue collar feel isn’t so far removed from recordings by label mates Nat Freedberg and Nato Coles, but if anything, does a far smarter job. On this particular track, the way drummer Tim Spinier locks a heavy snare against a jagged vocal gives the tune a genuine urgency, but also steers it closer to an early Springsteen banger at every opportunity. There’s a little something in the vocal that occasionally hints at a love for Real Kids, while a combination of heavy toms and organ swirls really accentuates Mono In Stereo’s love for all things 70s. Throw in a climax full of whoahs and handclaps set against a pumping bass and it has a little of everything to thrill lovers of all classic and retro sounds.

Going for something a little punkier, ‘The Fores’ pays homage to some of the band’s earlier musical experiments with a world of jagged, speed driven riffs and big chorus vocals. A few of the lead guitar parts aren’t a million miles away from Mono In Stereo’s more typical sounds, but the end result here is a dead ringer for prime Face To Face – and more specifically the best parts of their ‘Don’t Turn Away’ debut. Proving this is all done in good humour too, the instrumental section is lifted straight from the intro of Tom Petty’s evergreen ‘American Girl’, surely played with collective tongues in cheeks. Interestingly, of everything here, it’s the title cut that’s the week link. Going for a blend of bar room rock with shoutier punk-ish vocals, it presents MIS at their most abrasive. Beneath the volume, there’s a pleasing counter melody from the guitars, a solid bass part and a half-decent song trying to break through, but an over reliance on gang vocals and hard repetitive chords makes the track just a little too wearing. Given that Mono In Stereo are capable of some great melodies, applying a couple more would’ve been a huge help.

Thankfully, that average number is more than balanced out by ‘Not Your Fault’, which is easily Mono In Stereo’s very best tune to date. Scaling back from the garage rock and opting for more of a power pop influence in places, there’s a hell of a lot to like. The number has a stop start riff that’s a match for any number of skinny tie wearing bands from 1981 and by combining that with a great hook, the band delivers a truly excellent musical throwback. Hearing this for the first time is almost like imagining what would have happened if Tommy Tutone hadn’t broken up after a third flop album, or if True Hearts had found their true calling with something more melodic. In terms of retro power pop, you won’t find it done much better – and that’s without taking the track’s coda into consideration. To close, the band lifts this already great arrangement by adding a world of backing vocals where the use of the song title creates one of the catchiest refrains. It’s so much like a voyage back to the times of the post punk and new wave, it’s almost impossible to think this came out in 2019. Just brilliant.

If you’ve never heard Mono In Stereo before – and chances are, you haven’t – grab a listen to ‘Different Kind of Man’ and ‘Not Your Fault’. If you love American rock with a 70s slant, you almost certainly won’t be disappointed with what you hear. For those who consider themselves fans of the debut LP, this bulk of this EP will exceed most expectations. Stylistically speaking, there’s nothing here that’s particularly new, but it’s all played with love and comes highly recommended.