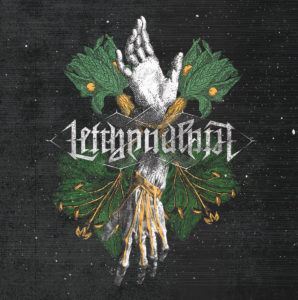 The five songs (plus intro) present a sound that’s very well produced and rich in bottom end. Even the EP’s only quieter moment at the beginning of ‘Intro’ suggests a massive production with an array of cinematic drones and ominous noises and, indeed, once the guitar riffs and vocal growls put in their timely appearance, there’s enough heaviness to distort everything…in a good way. By seguing the drones into a heavy, doom-ish riff, this gives the listener plenty of time to acclimatise, before ‘The Hole In Man’ blasts through with Left Hand Path riffing at full pelt. Melodically, it’s all very much a perfect mix of late 80s thrash and 90s groove metal, presenting a sound that’s never far away from Lamb of God or US underground band I Am The Law. In taking such a tried and tested style and running with it, guitarists Wagner Tamas (ex-Malpraxis) and Adam Andras (ex-The Hourglass) prove to be a real force when it comes to a classically heavy sound, which provides a natural backdrop for Cristian Aionese’s hefty growl. Fans of heavier groove metal should find an instant kinship with the sound these individual talents have managed to forge. Likewise, ‘Cognative Ills’ follows in a similar vein, only stoking up the groove and pushing the vocal into areas of melodic death. Heavier than before, the verses show Left Hand Path at their most confident and even once pneumatic drums reinforce the death metal edges, that doesn’t detract too much from any previous enjoyment. As if knowing that the heaviest parts of this track might push a few listeners away, there’s a great balance brought via an instrumental bridge where twin leads evoke a classic 80s sound, something that very much adds a melodic counterpoint to the many aggressive elements of a complex arrangement. With a few subtle guitar sounds underscoring everything with a scratchy motif towards the end, there’s also a feeling that Left Hand Path have a keenness to add a more modern twist on a classic heaviness. There’s a lot packed into these four minutes, but it’s pretty much all brilliant.

‘Egoschism’ wastes no time in kicking off with a riff that falls somewhere between classic Pantera and early Machine Head; a riff that recurs throughout the number, it again shows off this band’s natural gift for a heavy, heavy melody. Between the grooves, as before, there’s a lot to take in. Brief shifts into pneumatic noise that fuses classic death- and grindcore metal abrasiveness shows a real tightness within the rhythm section, while another forthright vocal suggests Cristian is a natural when it comes to the extreme style he so often favours. With passages accentuating some very mechanical rhythms and a much bigger focus on lead guitar melodies in a few places, it’s already another multi-layered slice of metal, but a couple of almost progressive complexities and a brief nod to doom along the way gives listeners even more to digest. Returning to an extreme groove, ‘Left Hand Path’ isn’t an Entombed cover, but another original composition that works the rhythm section extremely hard. At first, it sounds like a spot on homage to earlier Lamb of God, but it soon twists into a heavy tune that mixes offbeat rhythms and stops in a prog-metal style. There’s a huge power in the dual assault from Tamas and Andras throughout, which pushed forth even further by Szenasi Attila’s bass results in some absolutely top draw metal.

Finally, Left Hand Path appear to lighten up during the intro of ‘Greater Than Us’. Cleaner guitar tones hint at a couple of old Dio-esque melodies, while a scratchy sound from a second guitar reminds us that the band don’t just want to be rooted within an old metal sound. …And just as you’ve been lulled into thinking this’ll be a good way to wind down, the guitars and drums launch into their heaviest riff so far…something never too far removed from Entombed and other straight up death metal bands from the early 90s. After a while, things level out and despite the occasional tendency to shake a riff with a slightly off-kilter rhythm, the track blooms into some fantastic extreme groove metal for most of the remainder. As with the band’s other best tracks, if you have any time at all for Lamb of God or any other similar bands, there’s a lot to love here.

Much like I Am The Law, Left Hand Path don’t always strive for originality, but this is another release where technical abilities and the ability to absolutely nail their chosen style far outweighs any need for breaking newboundaries. ‘Left Hand Path’ – both the EP and band – is brilliant. In terms of extreme, weighty, no frills metal, it’s easily one of the year’s best discs.