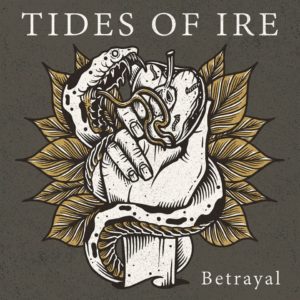 Formed in 2015, Tides of Ire gradually began to make a name for themselves through intensive gigging on the grassroots metal scene. Over the course of the following three years had picked up a loyal following due to their solid presence at intimate venues. Their first two EP releases (2017’s ‘The Burning Sea’ and 2018’s ‘Deadline’) quickly established their tough but melodic sound and while 2019’s ‘Betrayal’ offers plenty of similar sounding material, a couple of tracks easily represent an even bigger step forward.

The title track is actually little more than a grand intro, but within its fifty eight seconds, it really sets up an atmosphere. With a few ominous bass notes, reverbed guitar and some tribal drums, a moody melody fades in very slowly. …And then, at the point where you worry that Tides might have reinvented themselves as a wanky prog metal band, ‘Pest’ opens with an absolutely devastating riff. The sound that emerges shares many obvious parallels with the band’s previous works, with Matt Kateley and Daniel James Harper dropping some amazing downtuned sounds. Although this will seem immediately familiar to the band’s fans, the riffs are easily strong enough to reel in new listeners in an instant. A sound that fuses Sevendust and early Linkin Park grabs the attention well enough, but with the arrival of a partly rapped vocal, any Linkin Park love becomes more obvious – as does a passing fancy for P.O.D. In other words, in terms of updating a very 90s sound into something a little heavier, this track shows all of Tides’ best traits. Nearing the end of a fantastic metal workout, the band up the ante a little further and the guitarists go all out on absolutely crushing riff that blends elements of melodic hardcore with a post-metal intensity. The slower speed allows Matt and Daniel a little more space to add aggressive horsey squeals and also suggests it’ll bring audiences together in one giant head-bobbing mass. In short, this is one of the best metal tracks of the year. It makes a complex melting pot approach seem incredibly natural.

‘Prophecy’s opening bass riff (courtesy of Sam Alldridge) is one of the heaviest four-stringed sounds ever and a crunchy guitar quickly continues the band’s brilliantly intense assault. While the guitar riffs dominate, this track’s intense qualities are counterbalanced by a much more accessible vocal. So often, the chosen style celebrates a love of Linkin Park by using a meter that instantly reminds of the much missed Chester Bennington. It always feels like a loving homage than obvious rip-off, though, and due to the music being much heavier throughout it all comes across as being incredibly natural. As before, within the (brilliant) heaviness, each of the musicians shows an ability to play with conviction and for those looking for weighty melodies, this is another number that more than delivers. Finally, ‘Siren’ takes a sidestep into something a little softer in places and also a touch more gothic. A guest female vocal makes the track sound as if inspiration has been taken from a clutch of Euro bands, but that’s only part of the musical shift. A slower and more stately sound allows for a great use of musical stops as well as showing off the many layers Tides are capable of adding to their musical palate. Increased use of clean guitar work adds some great atmospheric breaks between the heavier parts and while there are still huge debts owed to Linkin Park in the vocal stakes, frontman Mark Wills sounds fantastic throughout. With the addition of a well-played old school guitar solo or two and a much bigger hook, the more commercial style suits the band well. Hopefully, this will attract new fans.

This EP comes with a massive punch pretty much throughout; it shows how major labels are just not needed any more. ‘Betrayal’ is short but almost perfect in its own succinct way. Tides of Ire have very obviously found a sound that really works for them, so there’s little point in messing with it too much, but between ‘Pest’ ranking among their best numbers and ‘Siren’ showing a small concession to something a little more commercial, this EP feels very much like an important move towards even bigger things. The influences sometimes come through very strongly, but Tides of Ire are great song writers in their own right. Between some fantastic riffs and a superb production job, ‘Betrayal’ is easily one of 2019’s best metal releases.