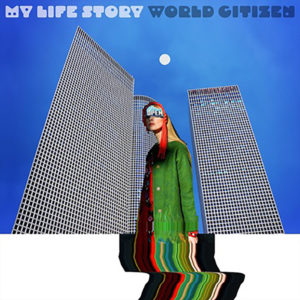 Making any kind of successful comeback after a long absence can be a tricky prospect. Time can be cruel. All too often, we’ve encountered bands returning to the spotlight after a long absence and wished they’d left their legacy as a rose-tinted memory. For British baroque pop band My Life Story – a cult band from the fringes of Britpop – a full time return to touring in 2012 didn’t just remind the old fans how good they were back at their 90s peak, but high profile gigs at the Star Shaped Festival and a few other places helped to bring them a whole bunch of new supporters.

Breaking a long studio silence, 2016 saw the release of a new digital single, the cheeky ’24 Hour Deflowerer’, which showed that frontman Jake Shillingford hadn’t lost his knack for a quirky lyric during those intervening years. It was only a matter of time until a new album would make its way into the world, of course. Off the back of some fantastic live shows over the previous year or so, the band began recording a new album in 2018.

Some nineteen years after ‘Joined Up Talking’, My Life Story’s fourth album ‘World Citizen’ is a record full of grand ideas. It’s own brand of sophisti-pop sounds wholly relevant to the time in which it was created and is so much more than a re-hash of the band’s past. There are plenty of nods, winks and links to previous works scattered throughout its twelve songs, but it sounds like a band truly looking to move forward. As such, older fans will be surprised by some of the results.

The opening number, ‘#NOFILTER’ sounds like almost nothing else in the My Life Story catalogue beyond a beautiful and stately piano sound that brings back memories of ‘Mr. Boyd’. As if announcing itself in an unobtrusive way, the music is slow and thoughtful. It gradually works its magic via the piano and vocal, never giving too much away. Eventually, swelling into a mid section where Jake and his band sound like they’re channelling something rather grand from an early 80s Roxy Music LP, everything falls into place. If things weren’t big enough, there comes an even bigger climax where the main melody is augmented by orchestras, choirs and vocal whoahs, all complimented by a rousing lead vocal. From an unsure beginning, ‘#NOFILTER’ closes in a rather grandiose way, often suggesting that ‘World Citizen’ will gradually become everything you’d want from a My Life Story recording.

Chosen as the lead single, ‘Taking On The World’ is a tune that’s full of bravado. A brazen pop rock explosion, fans will take an instant liking to the crisp, stabbing piano work that cuts through the track right from the beginning, while a string-fuelled chorus is hugely uplifting. Its general exuberance is never as immediate as the likes of ‘Sparkle’, for example, yet time spent will uncover a tune that’s just as life reaffirming. The strings are used in a fairly subtle way, but repeated listens show off their importance, especially during moments where hard struck cellos provide a direct throwback to MLS’s by now distant past. ‘Broken’, a sharp pop-rocker, would have perhaps made a better choice of first single, but it’s likely the band didn’t want to show their strongest hand upfront – and those who’ve seen My Life Story live will know this reference to playing cards isn’t just a handy but lazy metaphor. ‘Broken’ is a brilliant tune, one that gets under the skin immediately. A radio friendly banger, if you will, its world of hard acoustic strums lurking beneath a Teenage Fanclub-esque jangle is more than enough to create power pop gold, but the addition of harmony vocals galore and a great chorus make it a genuine album highlight. My Life Story were often seen as being on the fringes of Britpop, despite their heavily orchestrated pop sounding nothing like the scene’s bigger bands, but there’s definitely something here that harks back to those rosy days of 1997. If you’re already a fan, you’ll love this. If you aren’t, go in with open ears – you’ll be glad you did. If My Life Story have previously passed you by, jump in here to discover a great example of the band’s poppiest side – this has “hit” written all over it.

‘Sent From Heaven’, meanwhile, is one of the most typical MLS tunes. Working a hard and bouncing, almost McCartney-esque rumpty-tumpty rhythm, it often feels like a distant cousin to the classic ‘King of Kissingdom’. In keeping with the rest of the album, though, it has comes with far more modern sound at the time of recording. Without wishing to sound glib, it’s just lovely pop, bolstered by great production. As with ‘Taking On The World’, there are some fine harmonies as well as a catchy refrain, both musically and lyrically. For those who love the textures within My Life Story’s past works this will be a favourite, especially since a fantastic mix allows subtle harpsichord sounds to shine through the chiming guitars. In a vast change of mood, the semi-bleak ‘The Rose The Sun’ presents a pulsing keyboard sound and heavily treated vocals, augmented by strings. Something that could have been as downbeat as ‘Under The Ice’ actually has an odd, uplifting quality, especially for fans of Ultravox, Eno and cold but thoughtful synth-pop of yore. As is often the case, Shillingford is able to augment the blanket of sounds with a strong vocal and a distinctive ear for melody. The way his voice is placed against the pulsebeat impresses straight away, but it’s only with subsequent listens you’re able to focus more on the lyrical content which, in this case, contrasts the cold music with the warmth of love depicted within a metaphor of growing flowers. With the synths soon joined by string flourishes and a near cinematic feel, it gives the album a superb centrepiece.

‘The One’ continues the journey into synth-fuelled pop and a slightly too repetitive lyric labours its point at first, but once the drums and guitars emerge, the number settles into some great adult pop. With tinking glockenspiels and militaristic drums fleshing out an already huge sound, it’s a fine tune and that swelling, grand feel continues into the title track which places various indie jangles against choirs that sound inspired Red Box’s often overlooked ‘Circle & The Square’ LP. It all results in some hefty rock pop that works the entire band. Much like ‘Broken’, those jangling guitars are pivotal to making this absolutely thrilling in the way it calls back to lots of Britpop fare. Eventually, ushering in some 80s keys, it’s a proper kitchen sink job and all the better for it. Drawing closer to My Life Story’s formative years once more, ‘Telescope Moonlight Boy’ is rather introspective. It’s a little softer all round, but isn’t shy in using some big drum sounds to give a very rhythmic feel. Along with ‘The Rose…’, there’s a very welcome narrative element, but this time around it’s the huge piano chords, strings and very British sound that wins out. It may or may not be deliberate, but this seems to take a few cues from Colin Moulding’s work with XTC circa 1983. With so much to take in, it takes a while to click; when it eventually does, it asserts itself as one of MLS’s very best songs to date.

Dropping back into a maudlin mood, ‘A Country With No Borders’ touches upon the geography of politics – something in itself possibly inspired by the self-destructive mess of Brexit, along with the clarion call of being “World Citizens” – on another stand-out track. Using the acoustic guitars once more to accentuate a great tune, My Life Story take us on a very 90s musical journey full of echoing electric guitars, along with a massive orchestral sting and a man who’s more than happy to make us think about our place in the world. A stately sounding tune, its many interpretable messages and layers fairly are typical of the rest of the record, but if anything, Jake’s love of baroque pop from the 60s is more obvious than ever. Finally, ‘Overwinter’ brings the album’s most orchestral offering. Sounding like the inevitable wind down at first with more synths and the mood of a Marc Almond ballad, the number really comes into its own when a full orchestra bursts into life. The melody is fantastic – timeless, even – often sounding like something written by David Arnold for use over a dark scene in a 007 movie. Shillingford seems equally as theatrical as he muses upon cold, wintery themes and feelings of disconnection. It’s a good reminder that although ‘World Citizen’ isn’t a concept album – most of those are best left in 1972 – it does appaear have recurring themes of detachment. By the time you’ve heard this several times, it sounds like a more expensive, natural continuation from ‘Mornington Crescent’s more downbeat moments…and indeed, the whole album begins to feel far more like a natural successor to the band’s early works.

Nineteen years is a long time. Naturally, so many things have changed. Those coming in expecting a straight copy of ‘The Golden Mile’ or too much obvious easy recycling will have many musical surprises to discover. These songs are bigger – richer even – and some of the best material leans much further towards a solid rock-pop sound than anything My Life Story have offered before. There’s more on offer here than 90s nostalgia and 60s rose-tints and at the time of its release ‘World Citizen’ sounds like something of a modern pop gem. Perhaps most importantly, it’s an album that’s not just for the fans.

A brave and triumphant return.