As Rob and Lauren climb onto the stage via the trap door, it almost feels as if we only saw them last week. Hard to believe it’s been almost a year to the day since they were last here. Still, the familiarity feels good – and it must surely feel the same for the duo, knowing the kind of response they’ll get and knowing there will be a few familiar faces in the audience. In some ways, though, that’s almost where the comfort zone ends, since the first half of the evening is weighted heavily towards new material

The regular set opener, ‘King of Carrot Flowers, Part 1’ has been ousted in favour of the rockier ‘Coattails’ and it’s actually a great move. ‘Coattails’ is much punchier; a perfect introduction for anyone who has never seen the band before. Rob’s rhythm guitar work really cuts through and Lauren’s heavy beats set the tone for the evening. It’s a fine KOLARS tune, really capturing their spirited style in the most simple and direct way – the sort of track that’ll get audiences moving once it becomes more familiar. Without missing a beat, a cover of the Undertones’ classic ‘Teenage Kicks’ – a relatively new addition to the live set – increases the momentum. KOLARS are no stranger to cover tunes, having already covered Neutral Milk Hotel and the rockabilly standard ‘Mystery Train’, but this is something else. It’s a huge crowd pleaser and the way it’s been reworked from its pop punk origins into a performance with more of a retro rock ‘n’ roll flair just makes it perfect for KOLARS and reinforces the idea that their gigs are always geared towards having a good time. 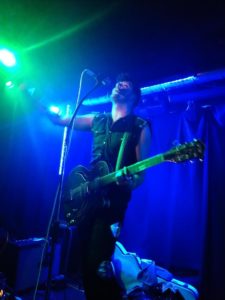 In acknowledgement that the venue is already a sweat box, Rob removes his trademark sparkly jacket in record time before beaming at the audience. He’s glad to be back…”in Cambridge”, he quips – a joke referencing that at the previous night’s show he’d been a day ahead of schedule and announced “good evening Ramsgate” in true Spinal Tap mode. From herein, stage banter is never a big focus, though Rob and Lauren are always friendly with the audience both on stage and off, something that proves a feeling that at KOLARS gigs there are no strict lines between band and audience – there is no room for pretentiousness here; everyone’s in it for the fun.

Slipping back into the new, self-penned material, Lauren really comes to life during ‘Let It Be Free’, another heavily percussive tune that could easily slot within older KOLARS songs, before ‘Who Owns Your Rights’ moves into rockabilly territory with a strident rhythm set against an assured vocal before dropping into something more foreboding. In KOLARS tradition, of course, most of the darkness is lifted by a semi-bouyant rhythm and plenty of tap danced percussion.

Midway, ‘King of Carrot Flowers’ puts in a belated appearance and the performance is lovely. If anything it’s far better suited here, allowing the audience a moment or two to recharge. This has already started to shape into a great show, but this concession to something more familiar is certainly welcome, before another new pairing suggests the forthcoming KOLARS album will be every bit as good as the debut. ‘Touch The Lightning’ is a heavily reverbed, mid-paced song that seems to capture all of the bands best traits in one sharp hit. Rob’s guitar tones are among the night’s best and his vocals are very natural. It feels like something we’ve all known forever…and the audience are very receptive. The current single ‘Turn It Up’ has more of a fun vibe, something which Rob seems to enjoy with his guitar cranked, but between the intimacy and sweatiness, KOLARS could be playing anything right now and the audience would love it.

Finally, there’s a run of tracks from the debut, helping to revive memories of last year’s gigs. ‘Dizzy’ sounds great tonight with its pulsing glam rock bass and melodic vocal and the layered ‘Beyond The World of Man’ shows off a more soulful influence, as well as being a reminder that KOLARS’ short and sweet debut LP is home to some superb material. 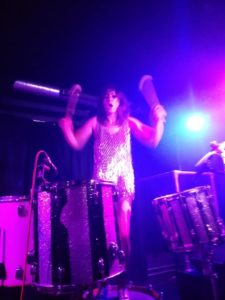 Nearing the end of the set, the heat has risen so much that Lauren actually jokes about taking off her dress in an offhand and diverting way, further proof that KOLARS are the best kind of band; they’ve got no time for strictly rehearsed dialogue or over rehearsed choreography like any well-oiled stadium hacks you’d care to mention. ‘Turn Out The Lights’ is a real highlight, just as it had been when the band supported Shonen Knife in April ’18, but on this occasion, if anything, it feels a little more intense. One of the tunes where things get stretched out a little, it’s a pleasure to be in the front row and being able to witness how Rob manipulates his board of guitar pedals and to see how precise he needs to be while triggering the various loops needed for the song’s full sound. Meanwhile, over on the other side of the small stage, Lauren stays busy keeping steady and heavy beats with her mallets. This is one of those tracks that KOLARS have played at most (if not all) of their shows and tonight’s performance with its every so slightly darker tone suggests they’re not even close to getting tired of playing it…just as much as the audience obviously aren’t tired of hearing it. Closing the main set is the evening’s other stand-out. A vigorous take on the should-be classic ‘One More Thrill’ finds a very sweaty Lauren going into tap dance overdrive – a four minute snapshot of why KOLARS are a must-see live act.

The encore brings another older track, but ‘Dangerous’ sounds as good as ever as it joins the other songs in offering something that sounds almost timeless with its blend of rockabilly edge and reverbed riffs. There’s probably time for one more – maybe ‘Mystery Train’ or ‘Bullet On The Run’ will round out the evening – but as before, KOLARS believe in leaving the audience wanting more…and they’re gone.

Tonight’s show clocks up barely an hour, but surely the sheer physicality of it all would make anything much longer too much of an endurance…and it has been quality over quantity. It’s also been great to experience KOLARS road testing a lot of new material safe in the knowledge that the Ramsgate audience loves them. Ready to enter a new phase and with a new record somewhere in the not-too-distant future, they’ve really shaken up their performance tonight and that’s how it should be. If you’re seeing any other shows on the current UK tour, you’re in for a treat.