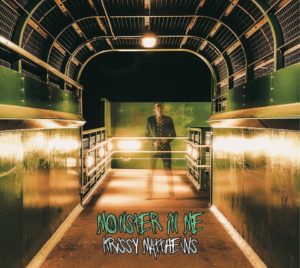 Sound wise, very little has changed in those intervening four years – the old adage “if it ain’t broke, don’t fix it” certainly applies – but it could be said, in the main, his song writing has sharpened. The album opener ‘Deal With The Devil’ represents Krissy’s heavier side. A number woven around a hard, stomping drum, there are traces of Jack White at play – its hard not to hear the opening verse of this and think of 2007’s ‘Icky Thump’ – but overall, it’s a finely crafted blues rock number that would suit Glenn Hughes. With a heady mix of overdriven guitar and heavy drumming, this should appeal to fans of Joe Bonamassa, Pat Travers and others, and although the feel is very retro, the performance still retains a vitality. Going for something even more gutsy, ‘Easy Meat’ is loaded with hard edged riffs throughout, with Krissy’s brand of blues accented with a wah-ed tone. For lovers of a riff, this’ll be an instant favourite, but the number’s best moments come courtesy of something even more direct when Matthews launches into a screaming blues solo heavy on effects, underscored by backing musicians firmly embracing a seventies power trio sound. Great stuff, indeed.

A slow burner occasionally reminiscent of Deep Purple’s ‘Mistreated’, ‘Is This The Love I Think It Is’ is a real highlight when it comes to guitar playing. Throughout the moody five minutes, Matthews is never that far away from filling space with strong blues-based noodles and his guitar tone comes across as incredibly confident. Here, he takes so many of the influences from his previous album and perfects them, while adding a vocal that’s big without feeling overdone. If there were any minor criticism, it could be that his young and very English sounding approach isn’t quite as gritty as such a track deserves, but on the other hand, that same styled delivery comes across as absolutely perfect on ‘Long Haul Flight’, so it obviously works for him, ‘Long Haul Flight’ is a track that casts aside the blues for straight up pop-rock. Big on jangly guitar riffs but even bigger on chorus, this track is an instant mood lifter. Matthews sounds as if he’s enjoying the recording session and that’s enough to inspire the listener in the process. Feeling more like a throwback to 2015’s ‘Scenes From A Moving Window’, musically, ‘The Girl That Lied’ fuses pop, funk rock and blues styles in a seamless package. Unfortunately, it’s one of the only times the song writing feels a little lacking; Matthews opts for easy rhymes throughout, resulting in lines like “took her on a date / now I have to wait”, so it’s lucky the melodies are so good. Between the funky strut and the clean rhythm guitar work, this number lends the album something a little different…and the featured solo is lovely. That’s enough to make it pass a few minutes pleasantly enough, but it’ll always be the album’s weak link.

A number that best befits a louder volume, ‘Gotta Stay, Gotta Leave’ applies Krissy’s blues rock sound to something with a driving rhythm. Via a selection of choppy riffs and enthused vocal, he arrives at a tune that is sort of a mix of The Quireboys and Bad Company. As expected, he approaches this with his usual enthusiasm, before dropping back to something bluesier for the instrumental break. With another cracking solo in hand, there’s a lot to love in these simple three minutes. Keeping with the hard boogie mood, ‘Paranoid Prison’ delivers a really relentless rhythm throughout its verses, never too far away from classic 70s Quo or the more aggressive side of Cold Chisel’s earlier recordings. In general, that kind of mood can feel throwaway and this is no exception, but for those seeking a classic sound, it’s also sort of timeless. To ensure it doesn’t feel out of place on the album, a concession to a bluesier stance is also on hand during a slower moment and Krissy’s playing is first rate. If it ever seemed unclear, this album sets things straight: Matthews is a man with a fantastic guitar tone.

The title track sounds like two musical ideas wedged together but somehow works not in spite of it, but because of it. To begin with, Matthews returns to the heavy stomp of the opener – a style that allows him to play a hard, funky riff with ease. This is contrasted with a chorus hook that promises something more soulful, but doesn’t quite work. However, there’s some really fiery lead guitar work to lift everything. Along the way, there’s a fantastic ascending scale that sounds as if it’s been loaned from Hendrix, before Matthews bursts into an extended solo that’s just so impeccably played. His lead work is hugely busy without ever sounding pompous or as if he’s showing off; his tone, again, is just lovely. Eventually filling several bars with lightning precision, it would be the ideal time to bow out, but Matthews has other ideas. First, he delivers the main lyrical hook one last time – just to make sure it’s not lost in the world of guitars – and then fleshes an instrumental coda with a shrill riff that sounds like a warning from The Twilight Zone. It’s all good, though…and a fine way to end a fine disc.

With a vinyl-friendly forty minute running time, ‘Monster In Me’ has precious little time for filler and, as such, finds Matthews barely wasting a second; even with ‘The Girl That Lied’s lyrical mis-steps, there’s some fine music, showing an artist still in a period of growth. Across the ten tracks, he runs the full gamut of blues rock and since he always keeps one ear on a melody, listeners can so often expect a tried and tested approach to be lifted by a strong chorus or seven. If you’re unfamiliar with Krissy, but feel there’s a place in the world for more blues and fancy hearing something that replaces the ego of Joe Bonamassa with some actual quality control, you should definitely make time for this enjoyable album.