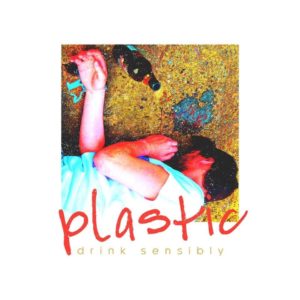 Before exploring any of the music on this release, let’s get one of the only negatives out of the way first: Plastic is not a very good band name. It’s a nightmare for search engine effectiveness and not especially memorable. Thankfully, Plastic are a great band and their 2019 EP ‘Drink Sensibly’ is an aural tour-de-force that fuses grungy elements with a punky sharpness, resulting in three tracks that sometimes sound like the work of a band fit to burst.

The sheer energy in their best material is self-evident, since ‘Munchies’ kicks off the release in a less than subtle way. Against a singular crashing chord and heavy drum, frontman Matthew Awbery screams “Ah, shit!” – and from that second on, the band more than has your attention. Following a brief stop and a couple more descending chords, the number takes off at great speed, sounding like an old Supersuckers album paired with a vocal performance that isn’t quite what you’d expect. It’s probably unintentional, but in a few places, Matt’s vocal sounds a bit like something from a Doves record, while in others, his performance relies on screams of anger and sheer adrenalin. With such a chaotic vocal set against a wall of over-driven, thrashing guitars, Plastic take a punky spirit and drive it into new territory, always sounding absolutely fierce. More of their indie influences come through on ‘Lovesick’ – the EP’s highlight – as a wall of guitars present themselves like a cock-sure mix of an old Swervedriver tune and something unfairly forgotten from an old NME freebie cassette. The appeal in the hard jangling melodies are obvious and it has the kind of chorus you’d find yourself singing by the third play. Factor in a brief interlude where the vocal is placed against a muted guitar, which again lending slightly more of a punky edge, as well as a dirty lead guitar break and this is a perfect guitar-driven banger – worth the price of your download alone.

The closing track ‘Spit’ stokes up the punky, thrashing rhythms, but intercuts those with angular chord changes. This has the effect of hinting at someone within the ranks still loves ‘Infernal Love’ era Therapy? and throughout these four minutes, the spirit of 1977 collides with the artier anger of the early 90s with fantastic results. Between a careening guitar break, some brilliant drums, random swears and a coda that brings out more of a sludgy feel, it leaves the feeling that Plastic are musically unsettled – and unsettling – lurching between various alternative styles with glee. This kitchen sink approach shows a band unafraid to experiment and that’s just one of many reasons why this EP seems to give so much with each listen.

The other negative? Obviously, this is too short. By the time you’ve really got into Plastic’s collection of semi-retro sounds, ‘Spit’ is well into its dying embers. Still, the repeat button comes in handy…and if you love guitar driven sounds that straddle a very fine line between melody and ferocity in a way that’s a little cleverer than your average indie/punk outfit, this is highly recommended.