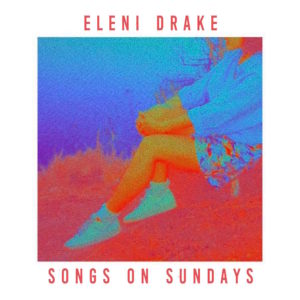 A collection of songs that melded jazz melodies with swathes of contemporary soul, Eleni Drake’s debut EP ‘Blue’ had a lot of crossover potential and was a release that lent itself well to evening listening. With a lot of the music straddling the kind of sounds you might find during the softer parts of a Solange Knowles record and the laid-back electronica of Zero 7, it seemed so contemporary for the time of release and promised well enough for a potential follow up.

Her second EP, ‘Songs On Sundays’ – released on the cusp of Summer ’19 – presents a lot of contemporary R&B with a touch of jazz and, obviously, if that’s your thing there’ll be plenty here for you to enjoy. For those less than enamoured with R&B moods it’s not a release that should necessarily be avoided since three tracks that are more indebted to trip-hop/ambient electronica could well catch the ear – and it’s those that help to make Eleni’s second release stand out in a world that seems over-crowded with heavily rhythmic R&B stirrers.

Easily the best number, ‘Trippy Tea’ instantly throws the listener back to the mid 90s. Swirling into a world of trip-hop styled beats, the track blends Drake’s gifts for an adult pop sound with elements of acid jazz, something that compliments her hazy, almost lax vocal mood perfectly. The way her voice taps into a mellow and woozy melody should appeal to those who’ve always loved stuff like Zero 7, while the occasional electric piano that bleeds through the quietest moments lends an almost 70s coolness. A coda laden with huge, bass heavy beats pushes the number from a Mediterranean sunset into something more Massive Attack-esque – dark, a little moody and perfect for night time driving. In other words, for the style, it’s pretty much all good. Providing another highlight, the EP’s lead single ‘Ceilings’ delves further into soul, combining more trippy beats with a much deeper soul groove. Throughout this song, you’ll discover traces of late-period Sade meeting with the more contemporary vibes of Amber Olivier and Mahalia. With a broad sense of melody, it’s a tune that all lovers of electro-soul sounds will enjoy from first listen. Reverbed guitars used against the beats provide a great touch throughout a well-structured four minutes and while the track brims with various influences the sound remains very much Drake’s own throughout.

Also excellent for the style, ‘Untitled’ hints at Eleni’s love of cool jazz, placing one of her supple vocals against tinkling vibraphone sounds, before locking down a floatier melody with a very welcome trip-hop drum loop. It’s the kind of tune that goes nowhere fast, but between some multi-layered vocals and a warm bass-heavy sound, there’s actually a lot to like. As well as showcasing Drake as a soul/jazz vocalist, its various throwbacks to the acid jazz lilt of Morcheeba and Zero 7 give the music a broader appeal beyond what could’ve easily descended into R&B grooves. Dropping into something even more mellow, ‘The Sun Don’t’ applies a light jazz Norah Jones-esque vocal to a spacious, ambient melody that sounds like a deep cut from Morcheeba remixed by Angelo Badalamenti, sounding like something deserving of many a chillout compilation. Whilst it’s incredibly sedate, in some ways, it shows off Eleni’s gift for mixing styles very well.

Beyond that, the two remaining tracks are far less interesting, largely due to their insistence on drawing a much stronger influence from heavy, rhythmic R&B. ‘Velvet Mouth’, in particular, is completely reliant on programmed beats and a very deep droning bass. Rarely stretching beyond generic R&B, it feels like an especially long three minutes; Drake is in good voice, but that’s just won’t cut on its own, especially it if you’re not a fan of the genre. Chances are – even if you really enjoyed ‘Untitled’ – you’ll be crying out for a hint of any real instruments to come and relieve the pending monotony here. ‘4’ is certainly more interesting as it dares to mix the R&B influences with a much sassier vocal, resulting in something that sounds like the soul of Solange battling with the street-wise vocal of someone like Lily Allen. Yes, Drake is attempting to branch out…but it’s hard work.

When this EP is good, it’s very good, and the three strongest tracks fuse jazz and electronica so seamlessly you’d almost believe that no effort went into the creation of those songs at all. With those numbers offering the kind of wind-down that would’ve once been soundtracked by Portishead’s ‘Dummy’ or perhaps a bit of Morcheeba, it’s very much geared towards the right time and place, but if heard in the right surroundings, each represents listening time well spent. More of that kind of thing and much less of the R&B sound would’ve been an improvement, but as it is, ‘Songs On Sundays’ is definitely deserving of an audience.