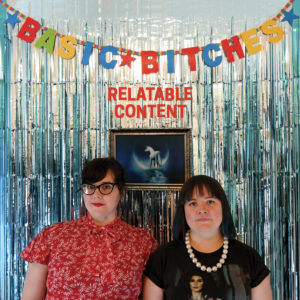 The appeal is there from the off, as ‘You Know I’m Right’ hits hard with a howl of feedback and a tough drum sound. As the melody kicks in, the choppy edge to the guitar work is fierce and the drums shift from a solid sound to carrying a rhythm with some fantastically heavy toms. Applying a natural vocal that hovers between angry and enthusiastic – complete with interjections that sound like ironic cheerleader shouts, this opening track is a superb three minute bundle of noise…and it’s one of those tunes that gets better with each successive play. ‘Real Nice Guy’ melds the band’s distorted garage punk sounds to a lyric that’ll be easily relatable to a huge proportion of their audience. Recounting various scenarios where the protagonists are hit on by guys in bars when all they wanted was a quiet drink, the tension and frustration within almost every line cuts through like a knife. A shouty vocal is a fine throwback to L7’s earliest output for Epitaph Records and the music is just as powerful. In terms of message, music and ferocity, all of the important bases are more than covered.

The EP’s highlight ‘They Should Put Us In Lights’ takes the old staple of “relationship song”, but shares feelings of togetherness without relying on clichés. It’s almost certainly about Naomi and Krystal’s own marriage; the track exudes a feeling of boundless love within its lyric, moving from the opening couplet where Naomi sings about the uncertainty of embarking on a new relationship to knowing that something is just so right. “Ever since I met you I’ve been drowning in idioms” might be one of the best lyrics ever (and it’s one of many here), but the music is just as great. Finally, ‘Cat At The Party’ takes a sidestep into something more unexpected. Whilst still clinging on to a distorted guitar sound, the track has a broader sense of melody from the outset. This is obvious from a vocal perspective since Naomi settles into more of a clean singing style. Coupled with some half-buried harmonies from Krystal, it means everything just sparkles (at least in a lo-fi garage punk sense). Moving into the chorus, those melodies hit hard as the duo slide effortlessly into a few old doo-wop throwbacks, dishing out a few vocal lines that hark back to Phil Spector’s Studio B recordings. If this doesn’t convince you of Basic Bitches’ bid for garage-fuelled greatness, nothing will…and At the close of the track, the main hook is delivered like a sledgehammer, while a few handclaps reinforce a very 60s sound. All the while, Krystal smashes her kit into oblivion. It’s instantly familiar, but that never stops it all being any less exciting.

For garage rock aficionados, there’s a lot here to enjoy from the get-go, but taking Krystal’s knack for sliding between snare and cymbals (especially during ‘…Lights’) and the shameless 60s flirtations throughout ‘Cat At The Party’ as the duo’s finest musical moments, it shows they’re a cut above just recycling old garage rock/riot grrrl/punk noises. Combining those musical skills with their ability to apply some very personal lyrical concerns, there’s little doubt that this is an absolutely brilliant release.