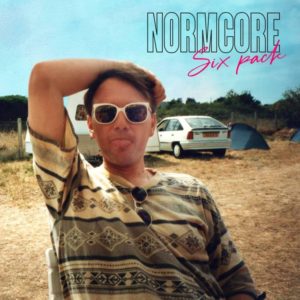 The best track is also the EP’s most melodic and fun. ‘Calypsa’ quickly catches the ear with a clean and repetitive riff that owes as much to power pop as noisy indie, and its a riff that persists right up until the first vocal appears at approximately a minute in. Dropping into the verse, a spacious feel allows a solid rhythm to take over with melodies that blend ‘Blue’ and ‘Green’ style Weezer along with a fuzzy guitar to great effect. The lead vocal is very…French, which contrasted with a completely US-centric sound really gives off an off-kilter feel, but that only adds to the fun. By the time the band find themselves waist deep in one of the best tunes Rivers Cuomo either forgot to write or couldn’t write, most of Normcore’s talents become really obvious. Noisier guitar interjections really shake things up along the way, but the real hooks and charm stem from that previously mentioned riff that’s used to fantastic effect almost throughout. If you only have time enough to check out one Normcore song in your life, it should almost certainly be this one.

Demonstrating the band’s noisier talents, lead single ‘Buddy Bud’ offers a great, fuzzed out riff that often sounds like something on loan from Weezer, but this time it’s tempered by fat Pixies-esque and Catherine inspired basslines. With such a solid backdrop, vocalist/guitarist Xavier really goes to town on an angry chorus, but it’s during a couple of musical detours this track really shines. You’ll find a couple of sharp guitar fills worthy of Billy Corgan and James Iha in their youth alongside a more interesting quieter mid-section that works a moodier vocal and grumbling bass that brings everything closer to Superchunk or a Lou Barlow experiment. With a slow and lumbering sound, ‘Snot’ at first sounds like it’s only rework a few basic Nirvana styled traits, but after an uninspired intro a much heavier riff opts for a Pavement-meets-grungy noise-rock sound, very much allowing drummer Baptiste to smash his cymbals and toms into oblivion. It’s a good job really, as this tune rarely gives him time for anything more complex. While the whole band are on good form showing their abilities for something slower and heavier, it’s a shame the riff couldn’t be saved for something better, since a man singing about a beard drenched in greenish bodily fluids is more than a little…unpleasant. Still, in terms of massive basslines and distorted, angry guitar riffs that come straight from 1993, it’s a track that’s still got plenty to offer.

‘One Track Mind’ is definitely another number that should be considered a highlight from this release, as it’s another tune that gives an insight into a couple more interesting ideas. There are moments where the melody, again, shows a love for Weezer, but an overall grunge-fuelled heaviness ensures its by no means any kind of obvious homage. The off-key lead guitars give a Pavement inspired edge to the sludginess – something that’s always welcome – but it’s the instrumental coda that really stands out. At the point where the song reaches a natural end, the drums kick back in and the band set about an instrumental groove that’s part grunge and part garage rock. Almost as if The Black Keys came to jam with Tad, this really rocks. Naturally, it sounds even better when played loudly, but between the heaviness, distortion and sheer groove, you might just wonder why this band insists on trying to sound like Weezer so often when the overdriven power trio sound suits them even better. Yes, there are four of them, but you get the point…

‘Back Row Kids’ is perhaps the most radio-friendly track since it has a much cleaner sound throughout. The inclusion of a brilliant bassline from Lucas that seems to be peppered by a few phased effects is key to it’s brilliance and a rather fine indie guitar part having a pop-rock-slacker vibe is also very cool, but a much softer vocal also sets this apart from Normcore’s norm, while the bouyant indie fare of ‘Daddy’ rarely tries to hide a love for Pavement and Dinosaur Jr. While the lead vocal is poppier and more melodic than both those seminal influences could ever manage, a lead guitar part that tips the hat to ‘Feel The Pain’ and a general vibe that makes this seem like a ‘Terror Twighlight’ deep cut will mean both bands will forever be in the back of your mind when listening. Let’s be honest here, though, it’s not like that’s a bad thing.

In lots of ways, although ‘Six Pack’ shows off some very, very obvious influences, it’s overall enthusiasm still means the EP feels like a shot in the arm for those who still crave 90s sounds. Along with Heyrocco and Melted, Normcore flesh out a true underground of bands who still worship Stephen Malkmus, Spiral Stairs, J. Mascis and Lee Ranaldo. For lovers of fuzzy, riffy and sometimes ugly guitar work, it’s release that should supply a reasonable amount of entertainment…providing not too much originality is expected.