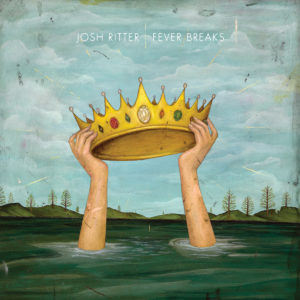 With its combination of strident rhythms and ringing chords at the outset, ‘Ground Don’t Want Me’ sounds as if it’ll resemble an old Wallflowers number – it’s hard to hear it without thinking of the mega-hit ‘One Headlight’ instantly – but then, Ritter twists the mood and he shifts everything further towards the country, but without losing too much of the grit. Adopting an old-fashioned vocal twang throughout the various verses, he tells the story of a man who saw his mother die, before being warned that he’s best off going to hell…slowly. Instantly, its marriage of rootsy vocal, fine storytelling and fantastic musicianship sets the tone for a great Ritter album, and by the time his affected delivery is tempered by a sweet female harmony, it’s got a lot of the right ingredients for a potential classic. Similarly, ‘Old Black Magic’ is a strong showcase for the assembled session band with some old Jay Farrar grit mixing with a very Mellencamp influenced vocal. With a full compliment of rootsy rock guitars underscored by a spooky organ it’s already got a great vibe. With most of that then outshone by a Neil Young-esque guitar solo delivered through a wall of distortion it has a relative simplicity that might not sit so well with those that love Ritter’s more complex side, but in terms of performance it has all the makings of something set to stun during the live set. A similarly rocky number, ‘Losing Battles’ could be the best thing Neil Young hasn’t recorded since 1990’s ‘Ragged Glory’, with Ritter in great voice and a heavily distorted guitar coming through at speaker breaking volumes throughout…it’s just terrific. It’s one of those tracks that avoids feeling ploddy thanks to a very forthright lead guitar covering a good proportion of the rhythm section’s steady pace. ‘Fever Breaks’ has its share of better storytelling and more intricate arrangements, but if approached in the right frame of mind, this is a genuine highlight. There’s a real joy in hearing Ritter and band cutting loose…and repeated listens lose none of the immediacy.

For those who enjoy Ritter’s more laid back qualities, ‘On The Water’ offers a deftly delivered rhythm, overlaid by huge retro chords with occasional steel guitar cries and a heartfelt vocal. In terms of fairly familiar Americana, the music isn’t especially out of the ordinary (though well played). This is one of those numbers that’s made all the better by Ritter’s distinctive gift for unusual lines that avoid the usual clichés. In this case, he likens himself to a fisherman’s dog and claims his love is “a silverfish on the line of your laughter” and refers to a journey in an old car as “the battle of the jalopy”. Beneath all of the lyrical quirks, though, there oozes a feeling of sincerity…and that’s enough to make this feel like an old friend after only the second listen. Going deeper into country, ‘All Some Kind of Dream’ is an instantly familiar tune that sports a superb dobro throughout, an almost two-step rhythm and a spirited vocal that presents Ritter at his most accessible. While often feeling like something that could slot into many of his previous records, his performance still sounds like it comes from a man whom enjoys what he does. It’s testament to the rest of the album’s high quality that this veers close to seeming more like safe, filler material. ‘Silverblade’ shows off some fine finger-picked acoustic work throughout on another track that is a highlight from a storytelling perspective. On this particular number, Ritter takes the listener on a journey through something that sounds as if it were written for a Western. With its nods to a knife wielding anti-hero and a chance meeting in what definitely feels like dust-bowl landscape, the imagery throughout is very strong…probably more memorable than the music itself.

In another tonal shift, the sparse and finger-picked root of ‘The Torch Committee’ bares the soul of a Dylan devotee, but avoids sounding like a direct rip-off by the presence of Ritter’s near perfect Leonard Cohen intonations and a heavily struck piano/haunting violin combo. Upon reaching the climax where the strings rise in anger, an early gut feeling that the final mix of the track – with some really old fashioned stereo split effects – might just be as much of a character than the tale itself really comes to light. At the close of the track, the heavy drums and howling strings owe more to The Bad Seeds than any of Ritter’s usual Americana traits, but it’s to his eternal credit that he’s able to place something like this in the middle of an album without it ever overshadowing anything that follows.

‘I Still Love You (Now & Then)’ sworks a very Ryan Adams styled mood on its chorus (something that might be a victim of its own unfortunate timing) while the similar-ish ‘A New Man’ shows off some fine dobro and fiddle work and both reinforce the idea that this album is full of superb material. However, some of the very best moments come during the understated closing number, ‘Blazing Highway’. An old fashioned, heart-on-sleeve piece of Americana that channels plenty of ‘Nebraska’ styled Springsteen moodiness, Ritter’s natural vocal style oozes charm throughout on another near-perfect travelogue, all the while a clean stereo split makes a dual guitar line even more interesting, with finger-picked sounds emanating from the left speaker channel and a more direct melodic clang from the right. Bringing so many of Ritter’s best traits together, this track makes his delivery of timeless Americana seem so, so effortless. While Josh’s committed fan base are guaranteed to love this – and indeed, most of the numbers that lead them here – lovers of Springsteen’s more sedate material or John Mellencamp’s ‘Big Daddy’ should make checking this out very much a priority.

At a point where lesser songwriters might run out of things to say, or at least sound like they’re just going through the motions to fulfil a contract, Ritter continues to shine. ‘Fever Breaks’ isn’t just for the dyed in the wool fan, either; sharing various elements in common with Jason Isbell’s own work, classic Ryan Adams and even carrying a smattering of Blind Pilot’s melodic charm, it’s the kind of record that deserves to be heard by almost anyone with an interest in great Americana.