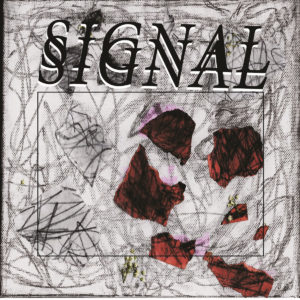 The lo-fi vibes are very much present from the off, with ‘Rat Pink Eye’ utilising a riff that sounds like early Black Flag coupled with an angst driven spoken vocal that occasionally harks back to the earliest Suicidal Tendencies. With the riff gradually getting faster as it goes, it’s pretty obvious that at some point it’ll just explode in sheer fury – and when it does, the hardcore punk sound leaves the previous Meltaways recording in the dust. Guitarist Carlos puts in a performance that is by turns angular and angry, while Aida’s unhinged vocal taps into something that should appeal to a lot of listeners who love lo-fi punk sounds. In an even briefer piece, ‘BLL’ visits a similar hardcore space to the UK’s Natterers. The riffs are even sharper than before and although the final mix doesn’t always make Aida’s lyrics particularly clear, her performance has so much fire. Filling the better part of a minute with thrashing riffs, this is very raw but when played back at the right volume the performance speaks for itself. Leading up to a fantastic bass rattle from Allie, this is certainly one of the EP’s standouts. No amount of volume seems to make ‘Dilala’ punch where it should. Instead, the seventy three seconds are filled with not much more than treble and fuzz, which topped with a vocal that struggles to cut through, results in some devastatingly raw garage sounds. It mightn’t reach the heights of the previous tracks, but still retains the kind of relentless energy you’d hope for. It would probably sound better live.

The final pair of numbers finds Signal branching out. Driven by a tight drum part and upfront bass, ‘Dorks On Bikes’ is reminiscent of the late 80s indie punk scenes in Boston and Minneapolis, especially in the way the guitars lay down a sheet of noise that seems to channel the earliest Husker Du recordings as the melodies rise from within. Aida’s spite-inflected voice sounds strong against the main riff, especially contrasted by the melodic root from an excellent bassline. The tune alternates between this excellent arrangement and a more challenging art-punk noise, but such a frenetic approach doesn’t stop it being another highlight. Last up, ‘Want It Worse’ presents almost three minutes of punchy basslines and harsh guitar chords – again, you’ll find more than a trace of early US hardcore here – and the lengthier, slower approach really allows Aida to vent. Her repetitious use of the title is especially effective and the way she literally ends up sobbing before the last outing of the main hook really forces the feeling that this angry recording could fall apart at any second. It’s an especially confrontational way to end things…

On this debut EP, Signal take the rawest elements of hardcore and rough them up even further, resulting in something that will only really grab the attention of those who always crave the most DIY punk sounds. It’s short, but anything longer would’ve almost certainly weakened the impact. If you liked The Meltaways or Genovia Forever, chances are you’ll love this.