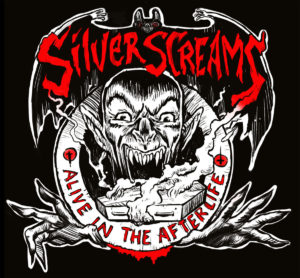 With no concessions to pop-oriented choruses, metallic breakdowns or obvious 90s skate elements, Boston’s Silver Screams play classic punk with hardcore edges. Their 2018 EP ‘Alive In The Afterlife’ is built from tough riffs that often champion the old-school approach which, coupled with a natural vocal and a huge amount of speed, results in a potential DIY classic.

Kicking off with a fabulous bass riff leading into harsh guitar riff, ‘Stitches Up’ wastes no time in showing off Silver Screams’ skills. Approaching the main riff in a full-on manner, the band often sound like a cross between UK Subs and Stiff Little Fingers with a nod to classic Misfits along the way, but they’ve taken those influences and really run with them. Combined with a huge amount of force, this offers something quite powerful, particularly in the way an unashamedly shouty vocal battles for dominance against a wall of guitars. Production-wise, things are reasonably raw – the vocals are sometimes buried beneath the riff – but this only accentuates the energy in the recording. Throw in a harsh guitar solo and these taut two minutes have all the makings of something great. ‘Understand’ couples a similarly brash riff with a grumbling bass and gang vocals, echoing both the UK street punk sounds and the birth of US hardcore. The chorus is overtly simple, but the way in which the repetitious shouting latches onto the riff and then refuses to let go essentially makes the track. Musically, the band show just as much greatness as before: angular lead guitars are inspired by East Bay Ray, while the main riff comes into the twenty first century via early Dag Nasty. In a shade under two minutes, this has a huge impact – it’s the sound of a band more than ready to take on bigger acts and come out winning.

With an even faster riff – and this time a very obvious homage to Misfits – the title track is a powerhouse of punk. A full-scale shredded riff collides with a barrage of drums to create a better sounding take on 80s hardcore, while an incessant vocal barks through the noise. All guts, sweat and with the minimum of fuss, the verses smash into a chorus that makes superb use of the band’s beloved gang vocals, before a forceful lead guitar adds a punk ‘n’ roll element to the mix. In terms of sound, energy and hook, it’s the EP’s best track, no question. In punk terms, it’s played pretty straight, but if you love 80s hardcore then this will be an instant favourite.

‘Alive In The Afterlife’ is definitely one aimed more at the purists, but should still appeal to anyone that loves absolutely no nonsense punk sounds. With only three songs to leave an impression, Silver Screams are more than aware they have to deliver and by sticking to an established hardcore punk formula without any temptation to dilute their sound, but it’s something they do fantastically.