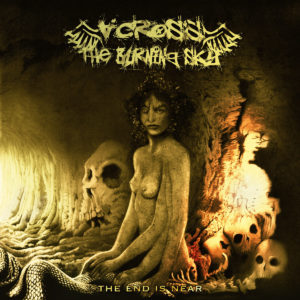 On tracks like ‘Demons Rising’ and ‘Sacrifice’, drummer Sethor is firmly in the driving seat, providing a huge amount of pneumatic aggression, never allowing the pace to drop too much. He’s always pushing forth with a speed-driven, bass drum heavy style. There are times within these more brutal workouts where death metal is blended with black metal subtleties, most notably in the way Aki moves his growling voice towards a hacking rasp and, especially during the former, the lead guitars settle into a circular grinding riff, the kind that could pierce through the most angry of rhythms. ‘Ashes To Ashes’ almost seems like a quick rehash of these at first, but then, everything – and everyone – does an about turn and the pummelling riffs drop into a chugging, thrash-based breakdown, allowing a touch more melodic guitar work to take a hold. “Ashes to ashes, dust to dust…reminds you of…”, Aki growls, before choking on something indecipherable, leading into a riff where everyone throws themselves headlong into a grinding frenzy. The push and pull between these two musical themes sustains three to four minutes well enough, but there’s still a feeling that ATBS are playing to type rather than truly reaching into themselves to offer something more distinctive.

‘Bloodlines’ mixes thrash techniques with a horrible blackened death voice, but still manages a musical step forward. This allows Zodiac and Matte time enough to temper the most forthright rhythms with clean, almost gliding lead guitar sounds and even unexpected twin leads, but it’s not quite enough to detract from the baser death elements. It’s an okay track – technically sound, at the very least – but not something you’d ever approach unless in a distinctly death metal mood, no matter how much of a crossover sound ATBS think they’re putting across. The same applies to ‘The Fourth Deadly Sin’, a track that promises so much via a Slayer-esque, slow and heavy opening riff before all too quickly descending into generic death grinding. It’s a track that shows off (with ease) how fast and tight a musical group these five men are, but gives no clue with regards to any musical imagination. If you want generic death metal, of course that’s more than fine of course, but it might not grab those more demanding listeners. The clean and almost medieval folk-tinged guitar lines that open ‘Shadows Embrace’ are at total odds with everything else on this recording, but there’s little beyond that to either surprise or entertain (at least in the long term) as several minutes of pneumatic hacking and thrashing ensues. It’s possible you’ve heard ATBS do this kind of thing in a superior fashion by now…and almost certain you’ve heard another band or two doing so. It’s definitely a track that should be better than it is, especially given those folk metal traits. Disappointing, to say the least.

One of a couple of stand-out tracks, ‘The End’ does a similar thing in a superior way, giving more time in the spotlight to the more melodic guitar lines, while there are times when even the vocal becomes a little clearer. Aki never steps back from a more forceful growl but, at least by matter of degrees, he seems a little more in tune with the musical backdrop. Elsewhere, ‘Towards The Sky’ briefly favours heavy and more bass-led riffery over the usual shrillness and showcases some great work from the rhythm section. The production allows crisp guitar sounds to rise above everything and the injection of more melodic ingredients places ATBS closer to the likes of Lamb of God and Gojira to the more bog standard death fare they all too often favour. Again, it’s when slowing down that Across The Burning Sky are at their most interesting. This, sadly, does not happen too often, but when it does, they get across both a feeling of heaviness and power. The more restrained drum performances are naturally a big help. ‘Call of The Ancient Gods’ is easily this album’s finest four minutes, presenting Zodiac and Matte at the forefront as they churn out very heavy downtuned riffs over a spacious arrangement. Even once the drums kick in for what passes as a chorus, everything has more of a groove and, as such, there’s far more for the average metalhead to get their teeth into. As with ‘Bloodlines’, the huge and slow lead guitar sounds are entertaining – clearly those are the key to what ATBS term melodic, so it’s a shame they don’t take this route as standard.

In short, Across The Burning Sky play hard and fast while displaying lots of strong, traditional and timeless death influences. It takes dexterity, speed and tenacity to become good enough to tackle death metal of any style, of course, but the drawback – if, indeed, you see it is one – comes from their not always being inventive enough to stand out from the crowd. Hopefully, somewhere down the line, they can take the better parts of what they do and twist those into something more interesting, but for now, ‘The End Is Near’ is good for a couple of listens, but far too generic to provide that essential, long-term metallic fix.