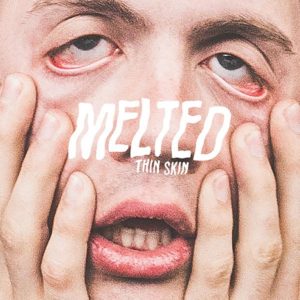 Following some brief feedback that helps show off their no-frills approach to recording, ‘I Always Land Straight On My Face’ demonstrates Melted’s chief intentions with the minimum of fuss and the maximum of fuzz: the guitars are so distorted they swamp almost everything, save for the absolutely maniacal crashing of drums. The barrage of cymbals is utterly relentless, even when things slow down a touch during the track’s second half and the heavily distorted vocal is at once oppressive yet still kind of frivolous. An unexpected collection of “oohs” tries foolishly to add a more commercial edge, but that has the overall effect of making it sound like Weezer have intruded on a live studio session by Greg Sage and the Wipers. With more gusto than would be considered commercially sensible, this is great.

Keeping the speed, but stripping back some of the guitars at first, ‘Most Days’ is an instant highlight, sounding like an old Vampire Weekend tune played at double speed. With the title making regular appearances in most of the vocal lines, this has the subtlety of a mallet, but eventually leads to a massive earworm. Musically, there’s just as much to enjoy, as these two minutes are powered by spiky guitar lines and a truly fantastic bass. It’s the kind of tune you’d call “recycled with love”, while the cleaner sound in places shows what great players these guys really are. A little more disjointed, ‘Death Hymn #10’ fuses the indie punk spikiness with occasional bursts of distortion that totally derail any element of melody as soon as things get too safe. The speed, the angular guitar and semi-yelped vocal each come together in a brilliantly energised way, leading to a tune that’s more about adrenaline than hooks. If you felt that everything The Hives released after ‘Veni Vidi Vicious’ was just too commercial, then this will certainly bring some superb garage punk salvation.

In a brief change of mood, the slower ‘Low’ taps into the grungier sounds of the 90s, but eventually tempers those with an off-kilter punk spikiness and various uses of stops, allowing a tough guitar sound to dominate throughout. As if there’s any fear that this is just too commercial, half the vocals are buried under the guitars, so Melted are still able to put their own ugly slant on everything, before the vehemently crashy ‘Stay Away’ recalls the trashy punk of Scream, doused with a brilliantly full and buzzing guitar sound. With regards to the latter, it could be in and out in just over a minute, but keen to show yet another side of the Melted noise machine, the last few bars slow down to expose a Black Flag-esque oppressiveness. While there’s nothing remotely original here, this is still a genuine standout and recommended listen, since it’s hard to resist when such riffs are so well played.

‘Hell’ offers a tough bastard of a riff that shows more Hives love…but then flips that on its head by sweeping away the punkier parts to indulge in a howling guitar solo, while ‘High Hopes’ taps into near perfect melodic hardcore, with a full sound applied to the guitars, punching rhythm section and repetitive chorus hook. In mixing some of their inflences, Melted have created something here that sounds like a deep cut from Wipers bolstered by a Descendents chorus. In terms of their own style, this album rarely does things better. Elsewhere, ‘Something Left To Loser’ bravely extends the blueprint to include some great staccato moments, an ugly lead guitar break and a minimalist interlude that is a definite throwback to early emo experiments. With the help an uber-trashy chorus – again, half buried under a wonderfully relentless end mix – this has a great retro bluster. Keen to leave a lasting garage punk impression, the speed-driven ‘Wanderlust & Foxtails’ draws a lot of its general power from early Nirvana and even earlier Bad Religion, before dressing that in a buzzing and edgy sound that throughout this short long-player Melted have worked hard to make their own. As with the best moments of this recording, the sense of total abandon comes through almost every moment…and that will be more than enough for garage punk fans to enjoy this final blast.

In approximately half an hour, Melted bustle and barge their way through some absolutely blistering indie punk tunes. With barely any room for reflection and no interest in anything remotely cerebral, the absolutely carefree approach is almost as important as the songs themselves. For fans of The Wipers, Scream and late 80s/early 90s garage based noises, this disc could be considered essential.