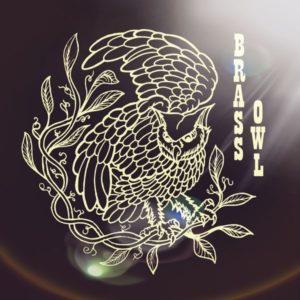 Founded in 2017, Brass Owl is an Ohio based power trio delivering a hefty dose of blues rock, often with a very southern twang. Their choice of sound often falls somewhere between Black Stone Cherry, something featuring Zakk Wylde and the more tuneful bits of Corrosion of Conformity (circa their John Custer produced millennial masterpiece ‘America’s Volume Dealer). Those influences alone should guarantee them a fan following. However, it’s what a band does with their influences that really counts and it’s probably fair to say that Brass Owl’s debut is a mixed bag.

‘State of Mind’ sort of sets the tone for the release in that it comes with an extremely chunky sound in the production department and a hefty southern drawl, often sounding like a deep cut from Black Stone Cherry fused with latter day Molly Hatchet. The bass playing is amazing: the notes are full, deep and often played in a busy lead style; the heavily wah-ed lead guitar has the presence of something recorded by the UK’s Bad Flowers or Big River and the drawling vocals sound like they come from someone spoiling for a fight. All great ingredients for a tune from the heavier end of the southern rock spectrum, so in theory, it should be great. A lack of memorable chorus is something of a let-down, however, as is the drum part. With so much of the music leaning towards a tough and menacing swagger, it’s a pity that most of the drumming is uninspired. In fact, the snare is so abrasive, this song sounds as if drummer Lonnie Buckley has overdubbed a biscuit tin being bashed repeatedly…and that, unfortunately, is enough to kill the mood.

Luckily, ‘Land Shark’ puts things right. Kicking off with a ballsy riff that’s straight out of Corrosion of Conformity’s most southern rock period, the band shows their attitude through sheer volume and simplicity. Dropping into something quieter, Buckley’s drums take the rhythmic weight but, thankfully, have been mixed more sympathetically. The lead vocal has a hard drawl, but is very much in keeping with the sound that’s quickly been set in place. If you imagine Black Label Society at their most melodic, you’ll have more than an idea what to expect from this, but as the track progresses, it’s clear that – unlike before – there’s more here than just riffs. Sinking into a mellow, swampy blues for the mid-section, the band unveil some reasonable harmonies which instantly increase the overall appeal, but it’s band leader Brian Tarter’s lead guitar work that wins out. Adopting a melodic bluesy howl, his tone is lovely and fat; via some lengthy notes, he’s able to steer the band from Black Label territory and further towards the feel of Warren Haynes and Govt. Mule, while Greg Skinner underscores everything with some fine bass work. In an example of a power trio understanding things don’t always have to be about sheer power, this is Brass Owl’s finest four minutes. If you only hear one song by the band, then make sure it’s this one. Seriously.

‘Spirit Song’ seems interesting at first, since its mix of heavy rhythm and slide guitar sounds owes more to Beck’s 90s mega-hit ‘Loser’ than Molly Hatchet or Black Stone Cherry, but as the track settles in, it becomes a fairly by numbers blues-rock affair. Buckley’s drums have a solid presence but are perfectly mixed for the loud blues at hand (the tin box was obviously hidden when his back was turned), and again, a few of Skinner’s bass runs marks his talent well above that of a workaday plodder. Despite a solid basis, the track rarely rises beyond a bog-standard slide guitar blues. It’s well played, but despite guts and volume, a couple of plays is all it takes to sound relatively generic.

‘Cat’s Got Your Tongue’ accentuates the band’s live in the studio sound with some great drumming and an upfront guitar sound. A semi funky instrumental, it’s as if Warren Haynes and friends jammed on a sketch by Santana, but removed the Latin traces. There are occasional wobbles, but in the main, the playing is solid, very much giving an idea of how the band might sound if you caught them in a small venue. ‘Circus Run By Clowns’ also injects something funky into the blues with some pleasingly dirty guitar runs and a great bass. The basis of a great track is here thanks to more punchy bass work, but in some ways, the natural and almost ringmaster styled vocal is distracting and the drums occasionally lose their way. It isn’t the worst thing on this release, but it’s hard to imagine anyone wanting to hear it more than once or twice. ‘Zero Funks Given’ is blatantly modelled upon ‘Freaky Styley’ era Red Hot Chili Peppers and, as such, feels out of place. Again, you’ll find some more than reasonable guitar playing – especially when it comes to a Hendrix tinged solo – and some tight, busy drums locking into a tough bass. Best intentions are surely meant, but it doesn’t come across as entirely natural for the band.

Picking things up once more, the seven minute epic ‘Mushroom Sally’ allows all three musicians plenty of space to stretch out. Anchored by the bass, the tune is a slow blues jam that pulls in many influences from Cream, Mountain and Hendrix’s Band of Gypsys. With the rhythm section locked in to something that sounds like a mildly psychedelic take on ‘Spoonful’ and ‘Red House’, Tarter uses the whole track to indulge in fiery solos, with most of the notes really pushing his huge tone forward. In a space where psych becomes very dark and the blues intensively heavy, the band aren’t ever shy about sounding like their late 60s influences and the way the track has been captured live to tape really brings out the best in the drums. It’s very enjoyable, yes…but it has one point of possible contention: it presents itself as if the listener has been invited in midway. Like the jams recorded to create Peter Green’s ‘End of The Game’ LP in 1970, this track doesn’t have a natural beginning or end…it’s just all middle. While everything is brilliantly performed, there’s always a feeling it’d be twice as effective as part of an actual song, if that makes sense. Still, as far as closers go, it’s pretty huge and the musicianship is hard to argue with.

Overall, this is definitely still worth a listen if you love a heavy blues style, and some listeners will find some instant thrills…but it’s unlikely to ever be a long term favourite. When Brass Owl gets it right – as per ‘Land Shark – they show signs of being an absolute powerhouse, especially with regard to some of Tarter’s finer guitar licks and Skinner’s flashier bass runs. When they miss the mark, though, as with ‘State of Mind’, they could pass for Zakk Wylde at his most uninspired and just blend in with countless similar acts. Riffs aren’t always everything if the songs aren’t there to back them up and ‘State of Mind’ is especially testament to that. This has the feel of a band who could be genuinely great in time…but on this debut, despite one proper belter of a track and regular appearances of fine guitar work, that time hasn’t quite arrived.