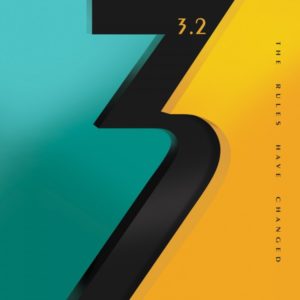 In 2015, Berry and Emerson hatched a plan to start recording together again. Various ideas were sketched out, but Emerson’s untimely death put a halt to a new project getting off the ground. In 2018, Berry took the tapes and musical sketches that had been laid down with Emerson and eventually crafted a whole new album out of the pieces. Despite many of Emerson’s fans voicing misgivings about a follow up to ‘To The Power of Three’ so much later, Berry had decided that making Keith’s ideas a reality would be the ultimate tribute to his friend. Coming some thirty years after the release of the 3 debut and a full decade since Berry released ‘The Dividing Line’, 3.2’s ‘The Rules Have Changed’ is much better than it had any right to be…and for at least a little while, the world feels all the better for it.

Very obviously derived from one of Emerson’s ideas, an instant standout,’Somebody’s Watching’ opens with a complicated piano flourish before huge parping keyboards offer one of the pompiest arrangements of the year. The tone is very reminiscent of Keith’s work on ‘Fanfare For The Common Man’ and parts of ELP’s underrated ‘Black Moon’, whilst Berry quickly pulls everything back for a verse or two of great melodic rock – musically never a million miles away from his own work. The push and pull between the AOR and proggy flourishes continues throughout, culminating in a bridge section that sounds like Eddie Van Halen has dropped in to play keys before a widdly keyboard solo gives the nod to an ELP past. At the heart of everything is Berry’s gift for a melody: his voice has worn well; his bass playing is solid enough to create a permanent link with the track’s disparate parts and there’s even time for a chorus of sorts. Granted, it isn’t as catchy as ‘Talkin’ ‘Bout’ from ’88, but he’s made every concerted effort to make sure this has a few ties with both his own and Emerson’s pasts…and it works excellently. Equally as good, the epic ‘One By One’ presents several bars of smartly played classical piano setting a huge scene, before wandering head first into something that sounds like a science-fiction overture. From out of the noise, Berry’s voice and piano emerges – his main concern being an emotive AOR vocal, which contrasted with the huge bass and keyboard sounds, evokes similar music from the late 70s. There’s a chorus here, but try not to hope for too much: this track is all about the music; a world of indulgence and sheer bombast. By the time a freaky keyboard solo wanders into the arrangement, followed by militaristic drumming and disjointed, wordless vocals of the Gentle Giant variety, it’s almost impossible to believe this was recorded in 2017. …And if that weren’t enough, various circus noises fill the coda just to give things an extra sense of unease. Fans of melodic prog and pomp will love this. Those still hoping for ‘Tarkus Mk II’ will never be receptive to 3 or Robert Berry whatever the outcome, but with tracks like this, they can’t say he didn’t try!

Far more commercial, ‘This Letter’ provides an insight into Berry’s acoustic skills at first, presenting him as a singer-songwriter not a million miles away from the likes of Greg Jones or Willy Porter. The stripped back style exposes the gravel within his voice – in a good way – and by the time the more complex parts of the riff are bolstered by tasteful piano sounds, it sounds great. If there’s any drawback, it’s that this could be anyone – there’s nothing here to link it directly to Emerson, 3, or even too many of Robert’s own works – but, in the main, it’s still enjoyable on its own merits. The synth strings that appear midway are perhaps misjudged, but everything else is fine. There’s eventually a giant twist that takes it from very American singer-songwriter roots into giant pompy prog noise…hence it’s place within this collection. By the track’s second half, Berry has overlaid drums and busy keyboards over everything, creating a very retro sound. By the time huge “whoahs” join for a climax to fade, it’s perhaps a little too busy, but you can easily see his intentions, and while this is very much two half-finished ideas glued down the centre, it would have been a shame for either of those ideas to have been wasted.

Released digitally ahead of the album, ‘Powerful Man’ sounds like a direct throwback to 1988. The opening keyboards take the same tone as a few key cuts on ELP’s ‘Black Moon’, but beyond that, it’s pure AOR with Berry in the driving seat. The kind of thing that’d make dyed-in-the-wool ELP fans’ heads explode, it’s verses drop into a quiet melodic groove, never much of a leap from Foreigner or Berry’s own Alliance. It’s nothing short of terrific for the style and very much something that should get a few melodic rock fans onside. The verses are well crafted, but it’s the chorus that wins out. Even without choirs of backing vocals, it has an easy presence and a timeless charm (especially for Alliance fans) in the way that Berry is just able to tap into the main melody without any worry he’s potentially recycling bits of his past. It’s great…and he knows this is great. The AOR elements here are so finely tuned that, in a lot of ways, the heavy keyboards during the intro and instrumental break are little more than a distraction.

For the title cut, a world of swirling keyboards overlaid by piano and wordless vocals suggests something at the bigger end of the AOR scale. This is true enough at first, as there’s a slightly overwrought feel, like a big ballad is imminent. In melodic rock terms, for the first part of the track, Berry puts in his best performance on this album and while it isn’t the most interesting piece of music, things sound very assured. Then, taking almost another five minutes to do not a lot over what feels like a very long time, it gradually unfolds into a grandiose affair that would have suited the departed John Wetton, before taking a somewhat unnecessary detour into the kind of progressive metal you’d find on an Enchant LP. It’s easily the album’s weakest link; almost like Berry has tried too hard to make a statement, when allowing a more natural flow would have worked better. That said, there are still a couple of nice ideas in here and Berry is in great voice. It might be an occasional skipper once the album becomes more familiar, but even with the flaws, it’s not a dead loss.

The relatively concise ‘What You’re Dreamin’ Now’ still has time enough for a giant neo-classical piano intro – again, Berry has done an admirable job of playing and recording the things sketched out by Emerson before his passing. A massive wall of prog keyboards eventually play a key role in linking the verses, but the end results are far more rooted within the melodic rock sphere than those or the intro suggests. As you’d expect, though, there’s a solid song from Berry nestled within the bells and whistles and it represents one of the times his voice sounds most at ease with something quite rocky. In fact, there are a couple of occasions when he sounds like Mr. Big’s Eric Martin which, although unexpected, is no bad thing. Bowing out with a melodic metal riff showing off Berry’s guitar work, this covers a variety of styles within radio single duration, but somehow manages to sound quite natural. Along with ‘Powerful Man’, it is definitely the most traditional 3 offering this time out and recommended listening for first timers, whilst ‘Our Bond’ offers lovely piano balladry somewhere between Asia and Bruce Hornsby at the outset, giving the album a slightly different musical slant. With some powerful chords balancing between heart wrenching and cinematic, it could’ve been a highlight, but the use of fake brass sounds really lets the side down. An instrumental break that borrows melodies from ‘West Side Story’ (a reference to Keith’s time with The Nice), plus a few bars of clattering prog which seem to serve no purpose are a pointless distraction, before a coda borrowing from Copland’s ‘Fanfare For The Common Man’ seems to over egg an already very eggy pudding… This track is a massive blight on an otherwise excellent disc, but as they say, nothing’s perfect. ELP never recorded a “perfect” album; maybe Berry was channelling that ethos? Whatever, ‘Our Bond’ is the very epitome of an acquired taste.

At the close of a largely excellent disc, ‘Your Mark On The World’ kicks off with really punchy prog riffs and a howling guitar, which makes a big impression when underscored by rolling piano. Moving into even more frantic verses, there’s almost an oriental feel within the deliberate clankiness and it could fall apart at any second, if not for a powerful and surprisingly melodic vocal. Two instrumental breaks reinforce the wanton chaos, but as with ‘One By One’, Berry’s keyboard skills prove exemplary – it’s hard to imagine this sounding any different had Keith lived to see its recording. During the second half, the rhythm breaks down into more of a funky strut, allowing Berry to throw out something resembling a hook before a wonderfully soaring guitar signifies things are coming to a close. There’s time enough for one more refrain built around the main clanky melody before everyone gets tired, and this track – although rather bewildering – somehow works despite itself. Whether you’d want to end your listening journey with something quite so jarring is another matter. Ending the album here is so frustrating, almost like the musical equivalent of filling a five year old child full of Lucozade Sport at 6pm and then getting stroppy because they refuse to go to bed. Still, regardless of almost everything, it retains an odd sense of fun – if that’s the right word – and will always be preferable to ‘Our Bond’, or most of ELP’s ‘In The Hot Seat’. As with a couple of the other tracks, the real appeal isn’t necessary in the song itself, though, but more in the fact that Berry played and arranged everything. The production still sounds full, as if he’d hired a complete band of session guys and that’s impressive…

Those who didn’t like the idea of a new 3 album before even a note had been heard are unlikely to be swayed, despite these arrangements being far more adventurous than their 80s counterparts. Those guys are still hoping for ‘Tarkus Mk II’ and are stuck forever in 1972, so nothing with please them. However, for those who still carry a fondness for ‘To The Power of Three’ but perhaps wondered how the band might have sounded had the commercial pressure from Geffen been lifted, ‘The Rules Have Changed’ isn’t just a worthy listen, but a near essential one.