We live in an age where music feels ever more disposable. Bands no longer have the luxury of multi-album contracts to hone their style and with streaming services all the rage, “the album as an art form” is dying. The very idea that Shonen Knife have endured for decades is fascinating. Since the release of their debut album back in the 80s, countless bands have formed, recorded, toured, disbanded…but the Japanese pop-punk/bubblegum power pop band have genuinely gone the distance. They’ve had line up changes – aside from ZZ Top, who hasn’t? – but they’re still with us and on the basis of tonight’s show in Ramsgate, they’re better than ever.

Perhaps part of the appeal of tonight’s show lies with the venue itself. With a capacity of under 150, the Ramsgate Music Hall is the very definition of intimate and it allows an opportunity to witness bands up close. Really, really up close. When Shonen Knife take the stage, there’s immediately a feeling that tonight will be special. 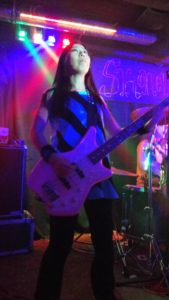 After smiling at the crowd politely while brandishing Shonen Knife tea-towels, Naoko (guitar/vox), Atsuko (bass/vocals) and Risa (drums) take their respective places upon the very small stage. It doesn’t take long before they hit their stride. Regular set opener ‘Pop Tune’ sounds fabulous, allowing the band to show off both their talents for pop-punk and distinctive vocal harmonies. it’s clear straight away that they’re thrilled to be here in a sold-out venue in front of a seaside crowd. Following swiftly with ‘Banana Chips’ [from 1998’s ‘Happy Hour’] they step things up a little more and, from the front row, it’s great to hear Atsuko’s harmony vocals on the chorus with such clarity as well as the audible rattle of her bass strings. Without a word and barely any pause between numbers, a couple more high speed Ramonescore tunes fly over the audience’s heads, giving a feeling that what follows will be pretty much free of stalling or filler.

‘Jump Into The New World’ sounds great tonight; less punky than the preceding material, this first offering from the most recent studio album ‘Adventure’ is surprisingly taut. While, overall, ‘Adventure’ is a little less punk rooted than a few other SN releases, the more mature sound really allows for a tough stance in the live setting. The same album’s ‘Green Tangerine’ slows everything down, but gives new(ish) drummer Risa a turn at the mic. It isn’t necessarily the set’s high point, but it’s a pleasure to see musicians so immersed in the momemt. [When not singing, Risa never stops smiling…and her happiness is more than infectious.]

An evening highlight, the middle of the set is devoted to a run of songs fixated with food: ‘Wasabi’ – another track from ‘Adventure’ – sounds like a cocky mix of The Donnas and long-time Shonen Knife devotees Redd Kross. In terms of rock riffery it’s superb and, in contrast, the power pop ‘Sushi Bar’ celebrates Japanese culture with a quirky bubblegum pop twist. Better yet, ‘Ramen Rock’ continues the rockier stance, while the memorable ‘All You Can Eat’ shows off the band’s more flippant side with a quirky riff, simple lyrics and a kazoo solo. Yes…a kazoo solo. Combine all of that with a spirited cover of Nick Lowe’s classic ‘Cruel To Be Kind’ and there’s no doubting this is already an excellent gig.

The evening’s latter half is packed with punky belters that smash into each other with the minimum of fuss or too much chat – this lean and mean approach is very welcome, though it’s also nice to hear Naoko refer to Ramsgate as “Rock City” and tell everyone how much they like the fish and chips and also how they’ve taken time out to sample some local curry. While she isn’t as obsessed with boats as Tommy Stinson had been on his visit in 2017, there’s a definite feeling that visiting musicians love the British seaside and that Thanet is destination worthy. Closing the main set with ‘Cobra Vs. Mongoose’, an intense blend of doom metal and hardcore punk gives th>e evening a final twist before a very sweaty band waves goodbye. A quick encore of ‘Rock ‘n’ Roll T-Shirt’ acts as both a final nod to ‘Adventure’ (an album which the band are understandably keen to champion) and a plug for merchandise…a perfect end to a near faultless set. 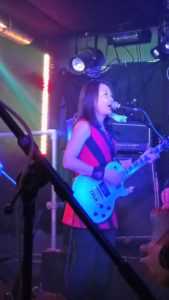 With seventeen songs packed into an hour it’s felt like excellent value. The band have seemingly enjoyed every moment of tonight and looking at visible faces in the still packed venue as Naoko, Atsuko and Risa make their exit via the stage’s trap door, so have the audience. …And rightly so: this has exceeded expectations. It’s probably the finest punk-based show Ramsgate has ever seen.

If you’ve somehow pigeon-holed Shonen Knife as a Japanese novelty after seeing them on the ITV Chart Show back in the 90s, it’s time you challenged those preconceptions. Go and see them live – you won’t be disappointed.