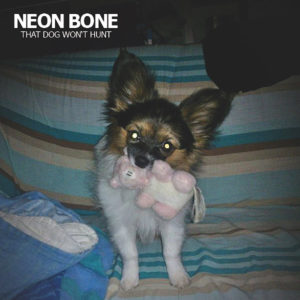 The first thing that’s obvious – and that’s within seconds of hitting the play button or dropping the needle – is that this LP has the a much better production job than any of the band’s prior recordings. The bass on the opening track in particular comes with a great melodic thud; one that really anchors the tune beyond a world of fat sounding rhythm guitars. Secondly – and this is the real clincher – that opener, ‘Waiting’, wastes no time in flaunting its great hook; in this case, it’s a big and repetitious homage to classic Parasites; the stuff of juke box 7”s of yesteryear welded wholesale to a love of Ramones and Real Kids alike. The coupling of a melodic vocal with such a broad musical sound makes for something that’s instantly appealing…and while it doesn’t break new ground for the genre, it’s a superb opener.

‘Nothing To Show’ kicks off with a classic riff and some woos (although these are low in the mix), before settling into something that sounds like a brilliant hybrid of Parasites and Screeching Weasel, with a bit of old Lillingtons charm (but thankfully without the vocal filtering) and some great bass work rearing up along the way, and with ‘Beyond Compare’ opting for something a little more of the early Weezer variety, Neon Bone really find their groove. With it’s mid-paced meaty riff, bigger focus on harmonious vocal melodies and a high pitched lead dropping in and out of a tried and tested arrangement, it’s all unashamedly retro but also good sunny fun, before the repeated refrain of “every little thing feeels right” acts as a solid earworm.

A bit punkier, though with a firm ear for a strong melody, ‘Break My Heart’ mixes a classic pop-punk riff and vocal with a tiny bit of garage rock, before reintroducing the piercing guitar sounds that filled the bridges of the previous track. At this point, you’ve heard each of Neon Bone’s best musical tricks across four tracks in fairly quick succession, but aside from an occasional vocal wobble, if the style floats your boat, you’ll find a lot to love. ‘Lose Yourself’, once again mines the Parasites’ back cat for its chief influence and shows Neon Bone at their most melodic. With a hook that returns squarely to the title every other line, it doesn’t take so long for it to make a real impression, before the slightly sun ‘n’ surf inflected ‘There She Goes’ sounds almost exactly like Weezer…but if they took influence from one of The Queers’ Brian Wilson obsessed tunes. Solid stuff, indeed.

Into the second half of the album and the song writing quality remains very high, with ‘On The Road Again’ sounding like a punchier Parasites – hey, if you’re on the borrow, it might as well be from the best – but by this time, it’s more obvious that it isn’t Neon Bone’s musical style that really drives this record as much as their knack for a killer chorus, and if you love good punk pop with a power pop edge, then this’ll be an instant stand-out before ‘Mad About You’ fills just over a minute with a short and sharp punker that wastes no time and doesn’t even think about teasing with anything as fussy as a guitar solo. The vocals are a little rougher, but that’s sort of to be expected, and while it isn’t necessarily ‘Dog Won’t Hunt’s finest tune, it’s handled with professionalism and gusto. Returning to slower climes, ‘Maybe It’s Just Me’ looks to those old Ramones slowies and their sloppy Phil Spector love – a great staple of the genre, sure, but not necessarily the strongest suit for Neon Bone as the pacing really exposes a weaker vocal, but this proves just a temporary blip, since what follows is another potential highlight…

No great pop punk record is complete without a cover…and this is no exception. Here, Neon Bone take on the old tear-jerker ‘End of the World’ (as made famous by Skeeter Davis in 1962 and covered by Veruca Salt’s Nina Gordon in in 2000), but instead of keeping the traditional slow arrangement, they’ve applied the familiar vocal melody to a pacy, choppy affair that’s close in spirit to various mid-period Screeching Weasel tunes. You almost certainly don’t need to know much more than that to guess how it sounds, but even with its predictable qualities amd a vocal melody that struggles to fit the assigned musical backdrop, you at least have to love the audacity of it! Even better, ‘On And On’ stretches the typical pop punk riffery and injects it with something choppier, a general buoyancy being reminiscent of early Goldfinger before another absolutely killer chorus sweeps everything away with ease. In pop punk terms, this is the album’s crowning glory and needs to be heard by everyone – it’s that good and should sweep away any doubts about checking out this album – before the power pop goodness of ‘Hold On To Yourself’ shows one last time that Neon Bone value a chorus very highly and while vocals mightn’t be their strong point, the coupling of a Weezer styled groove and simple melodic counterpoint carry things well enough as it is.

So…’That Dog Won’t Hunt’ isn’t especially original. Considering the band’s location, it doesn’t even have as much of a Euro feel as the work of their (should be) contemporaries. What it has, though, is a sack load of charm and more great hooks than Johnny Ramone could shake a stick at. If you’re looking for some really great underground melodic punk, this very enjoyable album almost has it all. In an ideal world, it would be the record that puts Neon Bone on the cult punk map…