They followed that with ‘Ticking Clock’ the following year, but their third album might be their grandest idea yet.  Using a fan pledging system to get the new album made, ‘They Never Say Die’ is a concept album based on everyone’s favourite 80s movie…’The Goonies’! 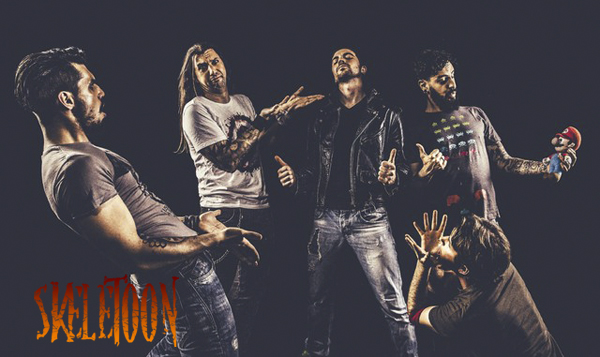 After collecting  sold out with the albums “The Cursed of the avenger” and “Ticking Clock”, the acclaimed power metal band Skeletoon return with the third album “They Never Say Die”, a concept album based on The Goonies!

The album will be financed from YOU  through the musicraiser platform https://musicraiser.com/it/projects/9749-they-never-say-die-i-goonies-del-metal, but to be a real “companion” in this adventure, you have to lead us through the story:

Watch the first episode of the  WEBSERIE “SKELETOON-IES”, to discover “One Eyed Willy’s secret treasure”, here below,
AND VOTE THE ENDING YOU WANT US TO CHOOSE: you can change the Plot and make the story go Better or Worse!!! So, be wise and remember the future is in your Hands!! 😉

RULES of the VIDEO-BOARD GAME:

– STEP 1:
Comment below the Videos on facebook artist page: https://www.facebook.com/Skeletoonband/
A) To let us follow the “Hacked” GPS or B) To make us Use the Real Map

– STEP 2: Go on
https://musicraiser.com/it/projects/9749-they-never-say-die-i-goonies-del-metal to ensure your part of the Final Prize, Supporting our Campaign.

– STEP 3:
Stay connected on https://www.facebook.com/Skeletoonband/ EVERY SATURDAY AT 14 PM (CET) for a new Episode and a new “Choosing Session” of your favourite Nerd Metal Webserie

You can vote in every moment, how many times you want until MARCH 16th, Hr. 23.59: then “The choose has been taken”, and you can watch the result for the following episode, the day after.