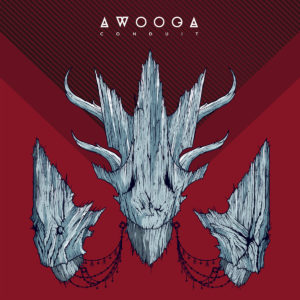 Creating a hybrid metal-based sound of doom, grunge, sludge and progressive metal, Awooga floored at least half of the competition with their debut EP ‘Alpha’. Taking cues from Deftones, Tool and Amplifier, the band created a sound that went far beyond being just a composite of its influences; a brilliant technical ability and a melodic vocal often contrasting the heaviness made it very compelling listening.

Approximately eighteen months on, the Sheffield-based riff-meisters have created something rather special in their first full length album. ‘Conduit’ takes everything that was great about the EP and refines it and improves upon it, but without any temptation to make it more commercial. The production is amazing; the songs – if indeed they are songs as opposed to a collection of amazing riffs with a vocal weaving in and out – each showcase a band who’ve really taken their time in making sure everything is almost perfect. And it shows: there’s barely a note out of place , and with the album clocking in at an old fashioned forty minute running time, there’s been no temptation to waste a second of it.

The opening number ‘Temporal’ crashes in with a slow and heavy riff, immediately pushing Awooga’s key interests to the fore. From here, everything builds slowly: the chugging riff really catches the ear in the way it pushes forth, with the bass underscoring a wall of guitars with an equally impressive grumble. There’s more than a hint of Tool in the sound, though perhaps not in it’s relative accessibility – and this might be a good thing. The band have a fondness for contrasting the outright heaviness with a very clean vocal style, which in turn seems keen to drive home a huge chorus hook. It’s one of those tracks that, at first, seems to be all about the enormous riff – and who doesn’t love one of those? – but, given time to reflect, the multi-layered voices are just as impressive. If you’ve not heard this band before, first impressions will be everything; thankfully, Awooga have been smart enough to realise that presenting something that never drags or seeks to fill ten minutes just because it can [Tool, we’re looking at you] very much works to the advantage.

Upping the ante, ‘Tabla Rasa’ starts with some jarring guitar sounds and the crashing of drums, creating a wall of sound. From within the chaos, another heavy riff soon emerges, forming the backbone for a wondrously down-tuned affair that really puts across Awooga’s ability to muster a slow and heavy groove. In contrast to the opener, the vocals are from a singular voice, balancing a musical tightrope between emotive, aggrieved and angry. It’s a definite shift, but yet still very much empathetic to the great music that’s quickly taken shape. With it’s slow pace and plenty of defiant string-bent grinding, there’s a Deftones influence at the heart of the track, but Awooga’s sense of vision means it’s a hundred times more interesting than anything Chino Moreno has ever touched. There’s nothing flashy – no wandering into mindless prog-metal solos – just heartfelt and heavy sounds…and it’s all the better for it.

The combination of scratchy guitars and intensely heavy fuzz bass gets ‘Waterhole’ off to a cracking start, but things get better yet with the verses injecting a touch of Perfect Circle-ish melody and an odd gothy undertone. This is amplified farther during some truly lovely bridge sections focusing on wordless vocals and some clean-ish guitar work that could be inspired by mid-80s Killing Joke. Chorus-wise, it’s classic Awooga – if there is such a thing at such an early stage – in that when the more melodic edges give way to a huge downtuned riff, a kind of grunge-doom hybrid that echoes a little Deftones and Clutch is positively thrilling. This is an easy highlight; it’s only disappointment is when it comes to a very abrupt end at just over three and a half minutes. Still, quality over quantity… Losing none of the magic on repeat listens, ‘Waterhole’ is a musical gift that just keeps giving. Echoing and spacious, ‘Blue Rose’ continues the band’s more melodic streak with a slow and hazy slab of desert rock that allows haunting lead guitar howls to fill space, while reverbed rhythm guitars sit against a stoner-ish rhythm. The introduction of heavily filtered vocals is a surprise, but in the context of this dreamy yet sometimes heavy workout, the stylistic choice works very well. The lighter parts of the number occasionally wander into Team Sleep territory – something some listeners will find very welcome – but during the heavier moments there’s no mistaking this for the work of Awooga: while their influences can sometimes be obvious, the way they use those influences has already created a distinctive and inviting sound of their own. This is almost as wondrous as ‘Waterhole’… …almost.

The second side could be utter bilge or – perhaps worse – a cover of side two of Lou Reed’s ‘Metal Machine Music’ and your money would already be wisely spent. Luckily, though, the album isn’t entirely front-loaded and Awooga have a couple more treats in store. ‘Bandit’ opens with a huge shimmering guitar and lead bass before descending into a world of tribal drums and progressive metal quirks, subsequently topped by a classically heavy riff. The production on the album is so considered that the heaviness doesn’t kill everything. Through great speakers, its still possible to hear the multi-layered guitar parts beavering away beneath everything. Moving into the main verse, Awooga mix their own brand of grunginess with an almost 90s alternative rock bent and all seems set. They then turn everything on its head and fall into a wantonly complex groove with the drums out front. It sounds as if it could all fall apart, but somehow they pull it all back to drop into a grinding Deftones homage to finish. This is perhaps the only time on the album where the music comes almost at the expense of the song: the busy qualities of the instrumental parts leave a lasting memory, but it’s to Awooga’s credit that even this weaker track never feels like filler or a failed experiment.

With ‘Witness’, Awooga pull out the big guns for an eleven minute epic. Regardless of what some prog bores will tell you, longer doesn’t necessarily mean better, and that’s very much the case here since this really doesn’t come close to the brilliance of ‘Waterhole’ or ‘Blue Rose’. That said, there’s a lot to enjoy: the Perfect Circle styled guitar parts are pleasing throughout and the usage of a higher register vocal in places lends the quiet parts an extra sense of vulnerability. It’s when tackling a riff that Awooga really come into their own, though, and bits of Tool, Deftones, A Perfect Circle and more collide in a cornucopia of sound. Better yet, though, is the usage of feedback to create a sound collage in a place of a more traditional guitar solo. The track’s quietest desert rock tendencies really allow the listener to experience some superb bass work, while shimmering guitars add as much to the overall texture as to the melody. The length, combined with the push and pull between grungy and spacey elements means it’s almost impossible to take everything in the first time you hear it…and that’s probably a good thing.

Finishing with ‘Otherside’, the album ends with something easier to digest, but not necessarily something that plays safe. Programmed rhythms and dreamy soundscapes make up the bulk of the music, which allows multi-layered vocals to take centre stage. Eventually the voices and guitars rise, but the shimmering strings don’t actually lead the way to anything heavier as expected. Instead, the bass joins, the shimmering continues and a semi-bluesy solo with plenty of reverb pulls everything together. Awooga have never been entirely predictable, but to end this album with something that sounds like a gothic cousin to a Snow Patrol power ballad is about an unexpected as anything… With a dour heart and space rock brain, in a perfect world, this could become the rightful heir to Sabbath’s ‘Planet Caravan’. Lovely stuff, indeed.

The ‘Alpha’ EP was good, but this is bloody terrific. Heaviness. Melody. Complexity without self-indulgence. The fact that Awooga also pack everything into just forty minutes just makes it even better. You couldn’t ask for more from a heavy release: ‘Conduit’ has it all…except filler.