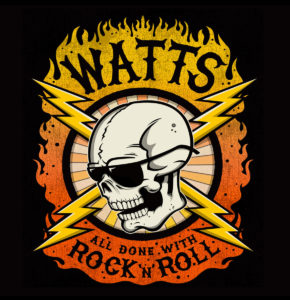 Boston retro rockers Watts are one of those bands who seem to have got better with each album. Hearing their work chronologically is very telling: although 2010’s rough and ready ‘On The Dial’ has enjoyable moments, it’s blown out of the water by 2015’s ‘Flash of White Light’, which in turn isn’t as thrilling as the best moments of 2016’s ‘Black Heart of Rock ‘n’ Roll’. At the heart of it all, of course, there’s always been that love for The Stones, the grubbiness of Johnny Thunders and the general trashiness of ‘Let It Be’ era Replacements…but there’s no escaping the idea that they just got better at their craft. That’s better than a band who put out a couple of stellar albums and then swim the murky waters of inconsistent art (Manic Street Preachers, we’re looking at you). With all that in mind, though, Watts were unlikely to top ‘Black Heart’.

Their ‘All Done With Rock ‘n’ Roll’ EP (released in January 2018), then, might not be up there with the previous album, but it gives existing fans a bite-sized nugget of sweaty rock ‘n’ roll that’s a very welcome start to a new year. The opening number – and title track – feels like a small step backwards from the previous album on first hearing. However, it’s one of those tracks that really falls into place after a while…and it’s a track that fans of ‘Flash of White Light’ will love. Johnny Lynch’s drum kit leads the charge with a hefty thump, while the vocal takes on a very 60s edge to its melody. Mixing those things with a twin guitar assault that makes great use of a good, grubby sound and stereo split, all the best Watts ingredients are in place. Eventually, the introduction of a confident gang vocal gives some indication of how the track will really come alive on the live scene, but it’s actually the tongue in cheek lyric that’s best of all. Nothing lasts forever, and Watts know it; firstly recounting the faith they had in rock’s abilities to deliver, the song gradually says adios to various career staples, referring to the curtain coming down, of how “the girls no longer come to shows”…and how, essentially, sometimes there’s nothing more to give. A heavily treated guitar that almost sounds like a kazoo revisiting an old Beach Boys harmony just adds to the fun.

Mixing rock ‘n’ roll with a slight glam metal edge, ‘Hi Definition’ more than hints at Lynch’s love for Kiss – there are glimmers of 1974’s ‘Love Theme’ and deep album cuts from the early-mid 80s within – but all the while, there’s a stomping grittiness that always calls back to the classic Watts sound. It seems simplistic on the surface, but sometimes that’s all you need. The way a dual vocal hits those guitars gives this tune more than enough drive throughout, and moving into the chorus there’s even more of a retro rock charm with the 70s meeting the 80s in fine form. Best of all though, a mid section that almost seems even more Kiss-ish. The guitar solos that top everything off don’t exactly scream from the speakers in the way you might expect given the glam edge here, but Watts aren’t always about the showy or flashy. This track is a great addition to the Watts catalogue, but if anything, Sunlight Alleys is better, coming across like something on loan from label-mates Tom Baker And The Snakes. The guitars settle into a Rolling Stones styled groove in a heartbeat, swiftly followed by a gravelly vocal that exudes great bar-room rock. You’re probably thinking “but that’s surely just what Watts do?” and you’d be right…but this is a particularly enjoyable example of what they do! Mixing a very, very familiar vocal melody on the verse with a harmonious chorus full of handclaps and Cheap Trick-esque confidence, this one’s a winner, no matter how (over) familiar it might seem. More than one-line for that chorus might have made it better still, but and the balance between grit and melody is perfect and a ragged guitar solo is judged perfectly against the mood that’s built up. Throw in a cheeky name-check for The Neighborhoods and it’s pretty much an instant favourite.

With the driving rock of ‘Tear It Up’, Lynch gets to really hammer his snares for a solid back beat, while John Blout and Dan Kopko take the opportunity to deliver an equally upfront guitar riff. As you might expect, it’s all pretty grubby but immediately accessible. Here, Watts channel some of the more raucous elements of the excellent ‘Black Heart of Rock ‘n’ Roll ending up with a very naturalistic blast of sound that often comes across as the feral lovechild of Gilby Clarke and Rose Tattoo. It feels as if this EP has been slowly building up to this massive release of energy…and it doesn’t disappoint. As some brief twin leads drop into a descending scale and the whole band opts for a crashing finish, it’s quite disappointing when it comes to an end. It’s taken four songs to warm up their listeners…and now it’s over? (At this point, if that’s how you feel, moving on to Tom Baker’s ‘Lookout Tower’ is very much advised.)

Are Watts all done with rock ‘n’ roll? Not entirely, since there will still be live appearances, together and apart; Johnny Lynch is also busy with Dirty Truckers; John Blout is a vital part of the excellent Tom Baker And The Snakes…but these studio recordings draw a line under the first chapter of Watts’ recording career. With a couple of tunes that are equal to the best moments of ‘Black Heart’, it’s not a bad way to bow out…