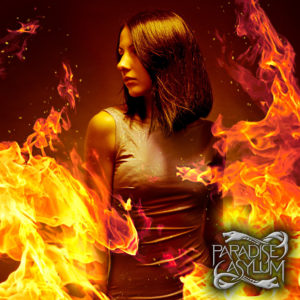 2016’s ‘Phoenix Rising’ suffers from the same budgetary constraints as before, but also takes a step further backwards in that – for the bulk of this English melodic rock outfit’s fourth EP – none of the material has any life to it either. The title track kicks off with a muddy riff and tolling bell that results in something that sounds like a teenage guitar novice trying to crack AC/DC’s ‘Back In Black’. This recurs as the main musical hook throughout the track, but never gets any better. The verses linking the riff drop into something quieter, as sporadic guitars fill spaces between Carla’s vocal. It’s a vocal that aims for sultry, hovering somewhere between a noisier All About Eve offering and Lacuna Coil attempting something dark and moody without their heavier edges. Simply put, it’s fairly horrible. Carla warbles throughout, not even in tune and possessing no real power. By the end of the second verse, something passing as a chorus finally appears and perhaps things will improve…but when moving back to something heavier, there’s nothing enjoyable. The vocal is off key, the riff is muddy…and their promise that “the phoenix is rising” has no gravitas. Not so much a rising mythical bird, but a dead duck.

‘In This Hell’ features a ham-fisted selection of picked guitar strings at the outset while the vocal adds a moody spoken word performance. It might be moody, but even these spoken voices carry no real power. The obvious English accent hampers things farther…and, as a result, this might be the most embarrassing spoken intro since ‘Never Ever’ by All Saints. Moving into the main riff, there’s a stodgy – but just about passable – guitar presence, but as the vocal rises into a full cry, the limitations are, again, frighteningly evident. It’s probably best not to become too aware of the backing vocals either – between them, Paradise Asylum possess no actual singers. Not one. Nada. The second half of this overly long six minutes features a faster section with an old fashioned NWOBHM styled guitar solo and it’s easily the best moment of this track and the whole EP. Any promise is quickly shattered, though, by the arrival of yet another woeful vocal. …And with one more chorus to fade out long past the point this track should have finished, this has mostly been a sorry mess.

‘The Crossroads’ shifts the sound from a sub-Nightwish bloat to lumpen bluesy rock. The upside of this is that Carla sounds a mite more comfortable, but there’s still nothing here to get excited about. The rhythm section pound through a tune that sounds like the abilities of a workmanlike pub band allowed into a recording studio, while the rhythm guitars – again, sticking to a muted sound – are rudimentary and the song writing is utterly forgettable. It’s not until the instrumental break where guitarists Gary Bacon and Andy Reeve trade off old school solos that things start to look up. Of course, it takes more than a couple of reasonable lead guitar breaks to carry a tune…and most of the time, these guys just couldn’t carry one of those in a (very large) bucket. What’s with those backing vocals? Were some mumbling drunks hired for vocal assistance? Oh dear. ‘NFI’, meanwhile, just doesn’t know whether its a light piece of goth metal or reworked 70s moodiness. Musically, it’s far superior to anything else on ‘Phoenix’, with some half decent guitar melodies and more atmosphere than anything else Paradise Asylum have recorded prior to this point. A faster section later also shows a love for the gothic – eternally spoilt by Carla’s terrible voice, mind, as her attempts at neo-operatics are not only misjudged but pretty nasty. It’s safe to say that Floor Jansen can rest easy. Although, musically, this track is an improvement, it still very much feels like a relief when its all over.

There is almost nothing about this EP that shows any real potential. The production and mix sound like mud, the song writing is uninspiring, the guitar playing is flat…and the lead vocal even flatter. Everyone has to start somewhere, but by release number four, fewer excuses can be made: Paradise Asylum still sound like a bunch of guys in a bedroom desperately trying to work out what their strengths are. The phoenix is not rising and this EP is best avoided.