In January 2018 it was announced that both The Beautiful South’s debut LP and Housemartins ‘London 0 Hull 4’ were to be reissued on vinyl.  Classic albums both, but here at Real Gone we think that any Beautiful South deluxe edition CDs are long overdue.  We’d like to take this opportunity to look at what might make up a box set of their 1996 best seller ‘Blue Is The Colour’. 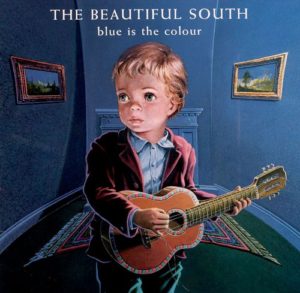 During their lifespan, The Beautiful South became one of Britain’s most popular bands. It has been suggested their first compilation album ‘Carry On Up The Charts’ is present in more than one in ten of the country’s households. Throughout their career, they recorded prolifically and, like Suede, made the non-album b-side an art form.

Strange then, that in the word of endless repackaging and deluxe editions, their original albums have never been reissued in expanded or deluxe formats. There’s a strong case for each of their early albums to be given the deluxe treatment, although some of the non album tracks recorded before 1995 were issued as a limited edition bonus disc with the aforementioned compilation.

Of all the albums perhaps most deserving of the deluxe treatment is their fifth album, 1996’s huge seller ‘Blue Is The Colour’. Arguably the last of the band’s “golden period”, the album spawned a few big hits – a couple of which were omnipresent on radio at the time – and the usual slew of extra tracks. Perhaps more importantly, as part of the promotion for the album, Paul Heaton and company were given the luxury of their own TV special, where they celebrated their career to date. Broadcast on March 21st 1997 at tea time, the forty minutes provided great viewing…and even more so by the time a later VHS release added plenty of unseen footage. Although a couple of clips have surfaced on DVD since, the whole programme has yet to make it beyond VHS. A glaring omission from the reissue catalogue.

In addition to that, an excellent soundboard recording from London’s Shepherd’s Bush Empire has circulated among fans, but has never been officially issued. The inclusion of this excellent though not quite complete show – which captures some great between song banter from Heaton – would be very welcome and round out a four disc set that would be very much worth having.

We imagine, if curated properly, such a set would run something like this:

Disc One – The Original Album

Don’t Marry Her
Little Blue
Mirror
Blackbird on The Wire

Disc Two – The b-sides and extras