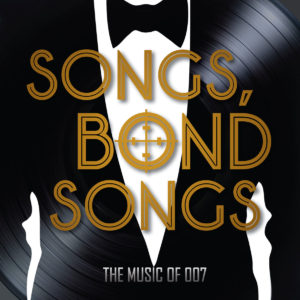 In 2014, music fan and entrepreneur Andrew Curry masterminded ‘Here Comes The Reign Again’, a double disc set of recordings by cult singer-songwriters and power pop bands covering various UK hits from the 1980s. The results, as you’d expect, were a mixed bag, but the high points were high enough to recommend an addition to any quirky record collection. Three years in the making, the follow up brings back various familiar faces for a near complete run through of themes from James Bond movies. The results are…interesting…but mostly, nowhere near as good as such a project seems on paper. This is a project fraught with problems, not least of all that Bond themes just can’t be reproduced on a meagre budget.

Whether or not the choices were determined by some kind of pecking order, the legendary Mike Viola – one of this sets more famous names – gets to put his stamp on one of the all time great Bond songs as he reinterprets Carly Simon’s ‘Nobody Does It Better’. However, the result is a slow and near tuneless electronic dirge. With “help” from Red Bank Catholic, this once superbly flamboyant tune led by sweeping grandiose piano is now delivered at a crawl with deep drones punctuated by shushing noises and bleeps, like Soft Cell at their most obtuse and played back at the wrong speed. Musically, it’s fairly nasty, but looking past that, Viola is in good voice – easily recognisable as the man behind various thoughtful pop-ish classics. A relatively strong vocal performance isn’t enough to save face, though, and with regard to this cover it’s all too tempting to suggest that nobody does it worse. Arguably one of the all too overlooked Bond themes, ‘All Time High’ (from ‘Octopussy’) is left in the hands of singer songwriter Zach Jones who just about manages to get his pipes around Rita Coolidge’s template. He struggles with some of the higher registers, but his own wobbliness is hardly this release’s biggest offence. Backed by pop-rock pomposity, on it’s own merits it’s okay, but in reality – much like the Popdudes’ utterly workmanlike version ‘Live & Let Die’ that sounds like royalty free supermarket music – it’s only real gift is that’ll just make you want to play the original recording instead.

Power pop’s golden boy, Cliff Hillis fares much better with a thoughtful and very melodic take on ‘Writing’s On The Wall’, very much allowing his smooth vocal to explore a whole range. This benefits from being much less familiar than so many Bond songs and also for the fact that Sam Smith’s all round beigeness really wasn’t too hard to equal or even improve, but it’s not enough to recommend this otherwise limp collection. Chris Cornell (RIP) had one of the finest voices in the world – power, range, grit, panache: he could do it all. Instrumentalist for hire, Phil Ajjaparu, on the other hand, sounds no more than a work-a-day musician for hire with an okay voice on a recording of ‘You Know My Name’. It was, obviously, wise to not try and copy Cornell in any way, but what transpires is flimsy adult pop-rock that, if it were not for such a great song, would be instantly forgettable. Ajjaparu would probably sound filler material on other power pop comps; the very idea he might’ve provided one of the better recordings on ‘Songs, Bond Songs’ is…worrying. The idea of “better” in this case is relative: is this worth hearing more than once out of curiosity? Nope.

Often sounding like The Cardigans with ukulele embellishments, The Corner Laughers are quirky. Their kitsch, when applied to ‘Diamonds Are Forever’, results in one of a couple of tracks that are neither merely bland or skippers. Stripped of the huge Bassey vocal and swelling strings, these guys re-imagine the track completely, as if covering the aforementioned Swedes’ ‘Lovefool’ or ‘Rise & Shine’. It might be a novelty recording in the eyes and ears of some, especially given that all of the lyrics are delivered in Spanish to boot, but at least they’ve approached their choice with sparkle and imagination. Gary Frenay turns in a reasonable pop rendition of the ‘Moonraker’ theme, aka: the third Shirley Bassey one that nobody remembers and the result, sadly, is a recording you won’t remember five minute’s after it’s finished. Like other offerings on this double disc-er, it would rather play to a niche audience whom are friends with half of the contributors than actually be good enough (and/or interesting enough) to reel in anyone not already au fait with underground power pop.

Lisa Mychols and her rocked up take on ‘The Man With The Golden Gun’ is another of the better efforts on ‘Songs, Bond Songs’. While this composition was never the top tier of Bond themes, Lulu’s voice on the original recording could never be criticised. Mychols wisely holds onto the original melody, but eschews Lulu’s power for more of a shined up pop style which is then applied to a musical hybrid of glam rock stomp and electronica. The bulk of the new tune is obviously inspired by Muse’s ‘Starlight’, which has also surely divided the potential audience somewhere down the middle, but at least it tries to be different. A few plays suggests that it’s okay for what it is and at least, like The Corner Laughers, some attempt has been made to shake things up (but never stirred, of course).

Identical Suns’ ‘Goldeneye’ is reasonable power pop on the surface, but a little lumpy upon (even slightly) closer inspection and their choice to reinterpret the massive string swells with a collection of vocal “doo doo doos” is fairly irritating and Ballzy Tomorrow’s ‘Another Way To Die’ is an ugly electronica dirge meets metal piss take that’s so bad that, surely, not even their mother could love it. If Jack White and Alicia Keys heard this, they’d be phoning their lawyers. It might be one of the worst professional recordings of 2017. Thankfully, Bowling For Soup’s Jaret Reddick is on hand with both professionalism and fun; his pop-punk cover of ‘Thunderball’ sounds like something created during BFS jam sessions and is all the better for that. With any luck, he’ll issue it somewhere else later on and it’ll entertain people without listeners having to squirm through most of this Bond travesty.

Freedy Johnston strips ‘For Your Eyes Only’ right back to acoustic bare bones in a way that would make it fit alongside many of his own recordings, so given that, it is at least listenable. It’s a travesty he couldn’t have applied his class, talent and technique to a much better song, while Cirrone manage to make ‘The Living Daylights’ (in the hands of a-ha, the second best 80s Bond theme), thin and forgettable on a recording that has too many electronic elements and no real presence. Jay Gonzalez, meanwhile, re-imagines Duran Duran’s ‘A View To A Kill’ as a light easy listening samba that’s light on lasting enjoyment and overly heavy on the fromage. You’ve heard a thousand other “ironic” covers done in this simple style, though, so it doesn’t really help Gonzales stand out at all.

With ‘Skyfall’, Gretchen’s Wheel sound a bit like an unimaginative Nightwish cover band recorded for fifty pence and Look Park (unwisely opting for the excellent ‘The World Is Not Enough’) sound fairly competent in the alt-pop stakes, but in direct comparison with the Garbage song at their disposal, it’s all pretty…disposable. You may be thinking “surely it would be fairer to judge Look Park on their own talents?”, but fact is, if you’re familiar with ‘The World Is Not Enough’, it’s near impossible not to instantly think of Shirley Manson’s great performance, especially when faced with this workmanlike affair. ‘Licence To Kill’ was always one of the more obviously soul driven Bond tunes, so technically should have been a perfect fit for Durga McBroom. Never has “should” felt like such a huge word, since she merely coasts through it. Things start well enough, but upon reaching the big chorus, it’s obvious the one-time Pink Floyd and ‘Naked In The Rain’ singer just doesn’t have the pipes for this song. Also: she seems out of step with the various power pop acts here… Was this recorded earlier and not specifically for this project? It feels as if that’s the case. Whatever, despite being one of the better known names and the recording actually having enough budget for real musicians – something most of these covers lack – it’s pretty bad.

The Bond themes: when they’re great, they have a brilliant majesty that’s easily recognisable. There’s a reason why so many of them have stayed in the world’s collective consciousness for so long (save for perhaps Tom Jones’s ‘Thunderball’ and Madonna’s ‘Die Another Day’). With that in mind (and with Curry’s previous tributes having more than their fair share of fun) it’s hard to know why he – or the musicians involved – ever thought this would be a good idea. With twenty six tracks in all, it’s very comprehensive, but with only a minimum of those creating any real enjoyment ‘Songs, Bond Songs’ is best described as a low-budget slog. Still, if for some bizarre reason you actually want to experience the the aural equivalent of something that’s often as welcome as a laser beam up the testicles, this release makes that so much easier.