Mason Summit’s third album, 2016’s ‘Gunpowder Tracks’ was the dictionary definition of surprising.  An album chock full of great songs and retro influences, the singer-songwriter showed off an ability to turn his hand to many styles with equal charm, ranging from pop, country, folk and jazz, resulting in one of the year’s most appealing recordings.

With that in mind, expectations are high with regard to a follow up, which Mason says will be released in January ’18.  Most of the forthcoming record, entitled ‘Summer Cold’, was recorded by Summit alone at home and it’s a record which in his own words “is sonically and thematically different to ‘Gunpowder Tracks‘”.

“The new album was mostly written while I was recording the last record, which is my usual process.  Some of the songs could have fit on ‘Gunpowder Tracks’ with different arrangements, but I got into the spur-of-the-moment production choices I was making. 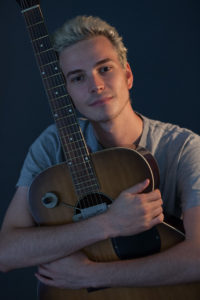 “Stylistically, I’d say it’s a little more unified in terms of production. I made an effort to make the influences less easily traceable, and working mostly alone at home (except for three songs recorded with my band, The Jars, with John McDuffie at Grooveolater) led me to make less obvious musical choices. I had a lot of fun experimenting with some old drum machines, synthesizers, toys and other effects I had lying around, and I also used the album as an opportunity to improve my keyboard skills.

“Everything is sequenced to have a kind of lyrical arc, telling a loose story from some loss and loneliness to a sense of renewal and optimism. There’s also an instrumental track named after Sardinian maggot cheese…”

Intriguing.  ‘Gunpowder Tracks’ will be a tough act to follow, but Mason is one of the best young songwriters to emerge from the US in recent years, so the new album will almost certainly have it’s own charms.

Mason will be road-testing some of the new material in December, just ahead of the album’s release.