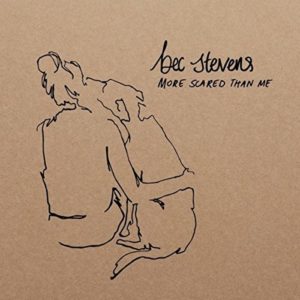 There are thousands of acoustic singer songwriters out there sharing tales of broken relationships and personal travelogues – those all important journeys of the heart, if you will. On ‘More Scared Than Me’, Australia’s Bec Stevens takes folk pop into very outspoken territory, very much as Frank Turner did on his best-selling break up record ‘Tape Deck Heart’. This is not new ground for folk music, but when delivering such familiar themes from a female perspective, Stevens’s work comes across with an unflinching honesty, resulting in a short collection of songs which should resonate with many listeners.

While the acoustic jangle of ‘Three Days’ is musically inviting, lyrically, it’s full of anger and hurt – a potential minefield – as the protagonist recounts time spent with a partner in a new home and the boredom of feeling alone once her significant other becomes absent. Remembering “the most love on the floor [I’ve] ever known” then contrasted with the emptiness that now bites the soul paints a picture of lyrical clarity that’s almost frightening. The stripped back arrangement makes things even more stark, but once she bellows “It scares the fucking shit out of me!” rather forcefully before suggesting that hiding from the world under a duvet is the best option, it’s obvious the deep and dark feelings run far beyond the sparse presentation. It doesn’t let the listener into her world gently by any means; this is a tale that doesn’t just invite engagement but very much forces it.

Despite Stevens’s preference for hammering out a similar arrangement, ‘Maggies Road’ is much more welcoming thanks to accompaniment from a very warm bass. This is in no way a cosy folk treat, however: if it wasn’t clear before, this release is all about the lyrics – and she’s really hurting. Here, emotional strains are placed under equally close scrutiny and we hear how the more upset she gets, the thinner she gets. If there needs to be any more of a human angle, she suggests that there has been parental concern for her emotional stability but promises she’ll be fine. And the ghosts of that old relationship are still rattling away like a splintered, closeted skeleton, especially with the pay off that “this bed is no longer [my] own”. The clean ringing sound which open ‘Uncharted Waters’ presents some of this release’s finest music, with Bec’s guitar shimmering as if it were reaching for a twelve string sound, while her voice also finds a more melodic space. As the music moves along, the folksiness has a hint of an old fashioned waltz and as the bass fills spaces between the full blooded chords, it becomes one of this release’s most enjoyable arrangements. There are a few positives within the lyric, surprisingly, with the storyteller confiding in friends who’ve been scarred by similar emotions, but a slight stability and a need not to be alone, once more, colours everything.

Taking a step down from the jangling style, the introduction of a softer vocal lends ‘Honey’ a very different mood, with Stevens picking at her strings while simultaneously picking at the sores of her past. She’s sorry for many things including a car crash, a friend’s disease and for the people who stood on her toes to get a better reach at life, only now to find she can’t get a good hold herself. There are mentions of departed friends and of suicide, and this number would be the ultimate in bleak if not for the musical thoughtfulness. The blend of the finger picked and strummed guitars creating a rising arrangement – both in presence and volume – set against a gentle bass provides great listening. Keeping things soft, ‘Trigger’ features a rhythm guitar that has a wonderful purity. The clarity and appeal of the music is a necessity, though, given the louder vocal and the expletive driven sentiments, as we hear that Stevens feels as if she’s left alone holding a metaphorical gun. Here, perhaps even more than ever, her love of contrasting sweet music with pain and painfully candid thoughts is very hard to experience.

‘Time It Takes’ has a very familiar musical backdrop, like a cross between a solemn Big Star number and the Lemonheads’ ‘My Drug Buddy’, with the perfect balance between acoustic sounds and sparse bass. A soaring violin adds a melancholy air while Bec indulges in more necessary soul searching. This time, she’s not taking the blame; the departed party is the one to blame. Maybe this revelation is responsible for the more balanced feel to the track in question, but finally we get to hear a singer songwriter who is full of hurt but also not shutting out the world. Unlike a couple of previous tracks, to hear this for the first time is an experience that’s not spent on complete tenterhooks – a once emotional time bomb now seems more enlightened. It doesn’t lose the sadness or the common theme of feeling scared by change, but its less thorny approach is a welcome (and probably necessary) shift. Almost as if to compound this, ‘Joey’ ends the release with something that’s upbeat and – to begin with at least – the jaunty Frank Turner-ish arrangement feels at odds with the emotional minefield through which we’ve been led. It’s an interesting tale: she may be more involved sexually with the titular character, but there’s no romance, she’s sneaking out the back door, spending too much time in separate beds and, as a result, she’s “still bitter” from the way she been treated. But then as things transpire, she’s also “not angry any more”. It isn’t the perfect set up, but all things considered, there are shards of light creeping through the cracks of the emotional dark and finally we’re left feeling things might just turn out okay. In contrast with the rest of the material, too, this final piece of music gives us more to grab a hold: Stevens’s guitar work rattles along like a gleeful freight train of acousticness, while Nick Williams steps up the pace on the bass; his often underplayed presence steps forth to give everything a massive lift.

As the title suggests, ‘More Scared Than Me’ is musically straight, but very often uncomfortably candid. The fact that Bec never shies away from letting her natural accent come through with regularity gives the material extra humanity. This is well produced and mixed, but beneath the professional sound, the songs are devastatingly raw. With these tracks, Bec Stevens becomes a spokesperson for those hurting everywhere; a voice unafraid to call an emotional truth the way she sees it. The gloves are off. There’s no softening of anything she feels needs to be said. Deal with it. It’s a harsh, but very striking musical statement.