YEAH YEAH YEAHS have announced details of a vinyl reissue of their seminal, ground-breaking debut, Fever To Tell, on October 20th through Interscope Records / UMe. The album will be available as a Limited Edition Deluxe Box, Standard LP, and Digital deluxe and standard re-mastered editions. Pre-Order for all editions from Sept 26th, with release on October 20th. “Shake It”, a previously unreleased track from the Fever To Tell era, is available as an instant grat now via all digital formats.

Speaking about the release, the New York trio said, “A friend of a friend kept asking if we were ever gonna put Fever To Tell out on vinyl as it hasn’t been on vinyl in 10 years. That’s not right. So here it is on vinyl for the first time in 10 years plus a time capsule of photos, demos (1st ever recorded,) a mini film documenting our near downfall and other fun memorabilia, from the turn of the century NYC, made with love + the usual blood, sweat + tears of Yeah Yeah Yeahs.”

One of the finest debut albums of recent times, Fever To Tell was released in 2003 and was influential in shaping the sound of the early aughts and beyond. Prior to its release, Karen O, Nick Zinner and Brian Chase had already established themselves as a ferocious live force; Fever To Tell introduced a band who could play thrilling and frenetic rock’n’roll one minute and captivating, hushed ballads the next. Its meld of scuzzy riffs, angular grooves and hypnotic hooks set a template that was often imitated over the next decade but the album’s rare chemistry isn’t easily replicated. It’s a snapshot of an era that sounds just as mesmerizing as it enters its 15th anniversary in 2018.

In celebration of and in addition to the reissue, the band has announced shows in Los Angeles (The Fonda Theatre, October 25) and Brooklyn (Kings Theatre, November 7). These two exclusive underplays join the two previously announced 2017 festival appearances, full list of dates below. Tickets for Los Angeles and Brooklyn dates go on pre sale with the vinyl pre order September 26th, and general on-sale September 29th. More info and ticket links at yeahyeahyeahs.com

Fever To Tell will be released on two physical formats:

DELUXE BOX – the Deluxe Box will be signed and numbered and limited to 2,000 copies worldwide. It contains the original album newly remastered on 2LPs, with nine unreleased demos, eight B-sides and rarities, and five newspaper lyric posters. It also comes with a 164-page hardbound photo book of Nick Zinner’s personal photos and includes pages from Karen O’s personal notebox, an embroidered iron-on patch, sticker, one photo card from Nick Zinner’s personal collection that all three members will sign and a custom champagne cork 8GB USB stick that includes over ninety minutes of video content as well as the twenty-nine audio tracks on the vinyl. To top it all off, all boxes will be wrapped in red fishnet stockings. The first 500 Deluxe Box buyers will receive a bonus cassette with 4 additional exclusive, unreleased demo bonus tracks with handwritten labels by the band.

LP 2 / Side A
Previously Unreleased 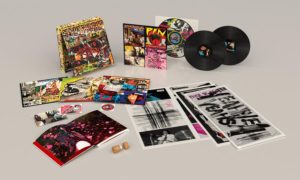 Side A
Original Album Newly Remastered