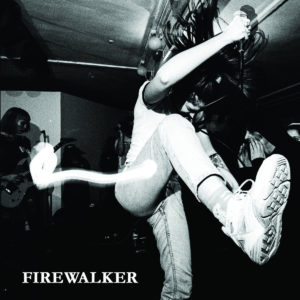 ‘Something In The Air’ is reminiscent of an early Sick of It All number in the way the rhythm section pounds out a definite and defiant groove between the harsher bursts of noise – and in doing so, is certainly appealing. It also gives a sense of a band stretching for a tough but definite sound from which they can build, where others would almost certainly have settled for a half-length pneumatic noise. Likewise, on the occasions that lyrics bleed through a very confrontational arrangement, ‘Darken My Door’ more than suggests there are universal messages to be gleaned from the band’s glorious noise, much in the way tunes like Gorilla Biscuits’ ‘Big Mouth’ and Sick of It All’s ‘Friends Like You’ spoke to a previous generation of hardcore fiends.

While those two tracks are immediate stand-outs for different reasons, that’s not to say the remainder comes up short on talent…even if it does come up short on duration. ‘Fire Walker’ presents a superb post-hardcore riff, slower but with a very tough stance – more in keeping with a classic Revelation Records release from Quicksand than something from Nuclear Assault – while the similarly brisk ‘Change’ fuses a classic hardcore riff at the outset. This is underpinned by a great bassline, and with a timeless metallic guitar riff dominating the second half, there’s a lot to enjoy. With frontwoman Sophie hacking and growling intermittently, there’s more of a crust-punk undertone on this number, it might be hard going for some listeners, but the fact that Firewalker appear to have blended three classic hardcore staples into a tune clocking in at less than a minute is fairly impressive. For those looking for a touch more melody, ‘Don’t Cross Me’ is the disc’s essential cut, taking a sidestep into classic, classic hardcore punk. Cecelia’s guitar riffs borrow the best elements from the Keith Morris years of Black Flag and a touch of Minor Threat; the ensuing tune rattles along apace, but always keeps an ear on a hardcore past, while the vocals attack with a crust-punk attitude that’s hard to beat. In and out in just eighty seconds, this might just resemble DIY hardcore perfection.

The intro to ‘Loaded Dice’ fuses more post-hardcore riffery with an off-beat, before dropping into pneumatics that dictate an arrangement that’s arguably one of the release’s most captivating. Against the scattergun backdrop, Sophie spits the lyric in an almost death metal like way, with it being near impossible to tell whether the vocal is male or female. In terms of equal standing, it’s the most devastating female voice since the sadly missed Grace Perry hung up her microphone. For the style, this is an amazing track… The incessant buzz of ‘Sicker Than You’, meanwhile, highlights the lo-fi nature of this recording, but doesn’t detract from the quality of material, especially as drummer Ryan Boone and guitarist Cecelia work themselves into a grindcore frenzy. Just as you think everyone will reach burnout, things slow down to allow just enough time for a brief hardcore stomp to bow out, while the similarly short ‘Scorcher’ is a great showcase for chugging riffs fighting an extreme thrash stance. The push and pull between the two main riffs allows Sophie enough room to bark out a surprisingly spacious vocal, before Nate pulls everything to a close with a relentless smashing of drums.

As debuts go, ‘Firewalker’ is like a sharp punch to the testicles; a female-fronted assault that packs eleven bursts of anger into approximately as many minutes. The fusion of metal, crust punk and hardcore can be hard going if you’re not in the zone, but despite being lo-fi, it also retains a vibrancy that makes it brilliant in its own right. There’s nothing here that might appeal to anyone looking for anything any more accessible or melodious than an early Discharge LP or something timeless from F-Minus, but in hardcore terms, it’s a potential underground classic.