From the beginning of his career in the late 70s through to his peak in popularity at the turn of the 90s, Chris Rea was a very prolific artist. In a thirteen year stretch, he released eleven albums. In the twenty first century, the very idea that a band or artist could average almost one album per year for so long is almost an alien concept.

Given Chris’s popularity – especially in Germany – it’s strange how these albums have been overlooked with regards to expanded reissue. However, each one – barring 1978’s ‘Whatever Happened To Benny Santini?’, which spent years in an out of print limbo – is still only available in the same CD pressing made in the late 80s.

Part of the reason for this will be to do with the general lack of studio offcuts. Save for ‘On The Beach’ and ‘Dancing With Strangers’ where the extra session tracks have always been available on the CD versions, there are slim pickings, but in some cases, there are enough extra goodies to make deluxe reissues worthwhile. There are various live materials in circulation, of course, so the idea of expanded reissues isn’t out of the question. 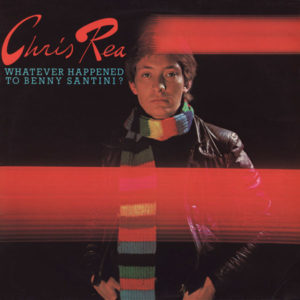 Although not a huge hit in the UK, Rea’s 1978 debut ‘Whatever Happened To Benny Santini?’ remains a rock/pop classic. It’s best known track ‘Fool (If You Think It’s Over)’ was a radio staple for years (albeit in the hands of Elkie Brooks), while the title cut, ‘Dancing With Charlie’ and ‘Fires of Spring’ showcase Chris’s ability with a simple and accessible riff and a great narrative.

The album was criminally out of print on CD for over a decade prior to an expensive reissue in vinyl replica packaging in 2014. That would have been a perfect opportunity to give the album a pleasing double disc reissue but, sadly, the album re-appeared in it’s original ten track format.

In a more adventurous world, the fictional pop star Benny Santini and Chris’s debut release would have been given the perfect send off in this audio/visual double set. Given the artist’s dislike of the album – and more specifically it’s final mix – something similar will almost certainly never happen…and more’s the pity.

Whatever Happened To Benny Santini? – The Deluxe Edition

Disc One: Audio
Whatever Happened To Benny Santini?
The Closer You Get
Because of You
Dancing With Charlie
Bows & Bangles
Fool (If You Think It’s Over)
Three Angels
Just One of Those Days
Standing In Your Doorway
Fires of Spring
Midnight Love (1978 non-album b-side)
So Much Love (1974 single release)
Born To Lose (1974 single release, b-side)

Disc Two: DVD
[This DVD collects the various TV spots Chris Rea made to promote the album in 1978 and 1979.]