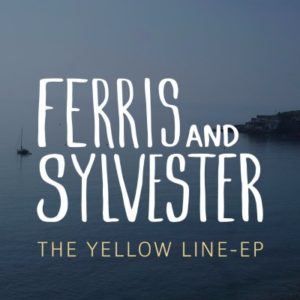 Having made waves on the underground UK folk scene and gained positive press claiming them “exquisite songwriters”, the arrival of Ferris and Sylvester’s recorded debut is cause for celebration. ‘The Yellow Line’ might only feature four songs, but each one shows off just enough subtle differences to be a great showcase for the duo’s talents. Between Archie Sylvester’s guitar work – often heavy on Americana styles, but also making time for a little blues and a teeny smidgeon of rockabilly – and Issy Ferris’s full but also soft, almost ghostly vocal tones, the performers are a perfect match for each other. Their songwriting gifts, too, have a near timeless appeal, weaving narratives that should appeal to ninety percent of an Americana loving audience.

The EP’s opening track, ‘Save Yourself’ is simply lovely. An aching tale of not just throwing your love away, this tune gets things off to a brilliant start, as there’s a parallel with Lewis & Leigh, at least in terms of smooth vocal presence. Sylvester lays down a crisp, finger picked melody giving Ferris the perfect backdrop, while occasional musical drones add an almost spooky edge that takes the listener somewhere else entirely. Issy’s voice, aching and slightly haunting, is the archetype of a modern folk/Americana hybrid, but also works a drowsy edge at times, something occasionally reminiscent of Hope Sandoval. A percussion free arrangement, this number is wonderfully sparse and almost completely reliant on the voice to build atmosphere, a job Ferris manages with ease. At the track’s end, some soft Mariachi horns flesh out the arrangement, by which time – assuming Americana is your musical bag – you’ll be in love with these sounds. Lead single ‘Berlin‘, if anything, is even more stripped back, with finger picked acoustics joined by terrific harmony vocals. With a warm bass punctuating the arrangement – again, drum free – these guys truly understand the concept of “less is more”. By the time the main hook rolls around for a second time, this track becomes something you can truly lose yourself in…and with swelling strings and a crisp harmonic to finish, it’s surely is one of the most perfect examples of the style you’ll find.

For the remainder of the EP, there’s a slight shift in style. With less to round out the arrangement, ‘Cold Summer’ pushes a little more focus onto voice and guitar and while the finger picked tune is impeccably played, there’s something about the production values that shuts out the warmth of the previous performances. It shows off a different side to the duo, though; one that’s more reliant on the lyric to hold the attention. As such, they know this and bring out a really classy hook regarding feeling lonely within a busy environ. At the point the track feels like it might sag a little, a hard dobro steps in to fill space, but overall, the real appeal comes from Issy’s voice. ‘This Is What You Get’, meanwhile, mixes the Americana stylings of ‘Save Yourself’ with a very retro bluesy twang from the electric guitar. It never quite delves into the moodiest aspects of Chris Isaak’s classic ‘Silvertone’ LP from ’85, but there’s something about this number that displays hints of that record – certainly just enough for you to assume Archie is a fan. After a slow-ish start, things really grab a hold with the track’s second half as Issy wheels out a great hook, which in turn is beefed by a small amount of distortion. Hearing this is like experiencing Lewis & Leigh jamming with Mazzy Star at Sun Studios, and while it certainly isn’t as immediate as their other tracks, it definitely digs further into their big bucket of retro influences.

This is only a short look into the world and works of Ferris and Sylvester, but there’s enough gold here to warrant repeat plays. Whether the warmer Americana tunes or the harsher twangy tunes fare best will be totally down to personal preference – this is very much an EP with two sides, or two musical faces, if you prefer – but in terms of performance, very little here can be faulted. Ferris and Sylvester have previously said their songs aren’t worthy of recording until they reach a perfect state for just voice and acoustic guitar and judging by this release, it really shows. There’s a lot to be gained from having such a timeless approach to writing and that timelessness makes ‘The Yellow Line’ a highly recommended listen.