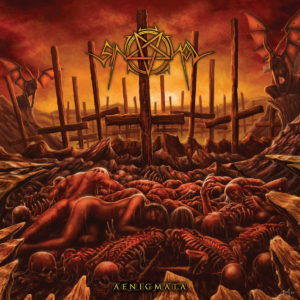 Hungary’s Sin of God play straight up death metal. With no tricks and very little fusion, most of the time these guys play pure death metal the way you liked it (or not) in the early 90s. Their 2016 release ‘Aenigmata’ is a good step forward production-wise from 2012’s ‘Limbus’ – the drums are much tougher and heavier sounding, while the riffs have more bottom end – but, essentially, it brings more of the same as before. If you like your death metal in a largely traditional style, this mightn’t be a bad thing.

‘The Emerald Tablet’ kicks of a brutal half an hour or so with a spooky motif fading in, with high toned guitars cranking out a mid paced riff, before a huge amount of bottom end informs a devastatingly slow chug to open everything properly, underscored by some great rolls on the toms. “But that sounds more like doom metal”, you say; maybe so, but it’s very much a red herring. After a few bars of this slow and heavy approach, Sin of God set about their core style and do so with aplomb. The beefy sound gives way for a crushing, pneumatic riff topped by a throaty growl. From herein, it’s pretty much trad death metal for the duration: none of the growled lyrics are audible – some are the vocals are demonically scary – and so it’s down to the music to take the driving seat. The thrash-edged riffs here are all fine, but it’s when they push forth to unleash a dirtier, grindier, purer death sound that Sin of God really come to life. They sound like they mean business and, for the most part, approach their music in a very tight and familiar way. Taking the roots of death, they churn and grind through three brutal minutes before the atmospheric intro returns for a fade out. If you like this, it’s worth listening further. If not, you’re best advised to move on.

‘Phospherous’ combines a juddering riff with some staggering drumming from the outset, before a chorus pushes the tempo even farther. From herein, it’s very much a track dictated by circular, grinding riffs and a drum part that could only be best described as blisteringly fast. As meat and potatoes death metal goes, it’s perfectly played: the ultimate tribute to Ralph Santolla and Chuck Schuldiner’s pioneering work, as are both ‘Deus Metamorphosis’, a track with a speed inflected, skull crusher of a riff and vocal to suit, and the interestingly titled ‘The Great Lion Devours The Sun’, a workout on which each of the band members absolutely wring the hell out of a couple of riffs while the drummer employs some impressive third leg tactics. Perhaps the most distinctive feature during these unsubtle three minutes come from the fact the vocal takes a side step from the constant growl to deliver the lyrics in a more punctuated rhythm. That doesn’t mean any more melodic; just more pointed – this track is still very much of Sin of God’s almost puritanical approach to the genre.

‘The Human Worm’ almost does the same again for the first half, only this time works the drums even harder – if, indeed, that’s even possible. Midway, everything slows to a welcome groove metal chug, but the impenetrable voice and near constant double bass pedals ensure this is still a fairly full on death workout. It’s great to hear something a little slower taking a hold as well as an impressive bass sound cutting through a couple of stops. In the death metal stakes – as always – it’s hard to pick holes in the performance and the band’s general devotion, even if the end results can be wearing in places. The title cut provides the album with one of its more interesting arrangements, as the track begins with the usual lightning speed pneumatics, but tempers the intensities with a melodic lead guitar as counterpoint. The high tones of the lead give a constant element to draw in the ear and the tightness between the band members cannot be argued. The arrival of the vocal means that everything descends into more of a standard death metal vibe. The heaviness increases, thanks to the drums borrowing influence from grindcore – the band in turn sounding like a genuine force of nature. In death metal terms – much like everything that follows – it’s about as well played as any you’ll hear, but it isn’t anything out of the ordinary.

Filling out the rest of the disc, ‘Illuminate Us’, ‘Altered States of Chaos’ and ‘Loss Leads To Impiety’ are a trilogy of intense workouts that will entertain – assuming, that is, you’re still impressed by the relentless drums and growls. ‘Illuminate Us’ briefly suggests extreme metal of a slightly more contemporary style at first – the grindier elements of Nile are hinted upon, and a hissed vocal is unexpected, but soon enough, Sin of God return with speed to their comfort zone; a clean guitar at the outset of ‘Altered States’ that’s followed by a timeless, bombastic intro also gives hope of something different, but inside of a minute, the number works an old school death metal tome into the ground. A dark multi-layered riff promises more, but never really develops. A hard-edged guitar solo during ‘Impiety’ allows a slower and heavier riff to very briefly cut through the noise, with more hints of Nile and even early Slayer, but again, soon prefers a timeless death metal raucousness to make its main musical points. These tracks are never bad and it would be unfair to call them filler when the main thrust has been worked upon so tightly, but compared with the opener and the title cut, they sometimes appear more pedestrian.

It’s fair to say that if you like your death metal played with an almost exclusively traditional approach – classic Death, early Decapitated, Deicide et al – then these Hungarians will certainly impress, whether you’re already a fan or coming to them for the first time. If you’re looking for a more modern deviation, however – maybe tech-death, death-groove or a touch more black metal – then this album might just be a bit too straight. Overall, ‘Aenigmata’ is very well played, but not always distinguishable from so many other releases out there. That doesn’t make it bad – Sin of God are certainly very good at what they do – but with so much other death metal in competition, something a bit less predictable would’ve helped them to really take things to the next level.