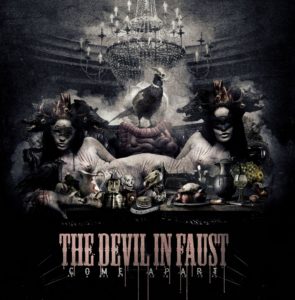 ‘Cross Your Heart’ gives a good indication of the band’s sound. The riffs come in a very heavy and measured way, with the overall feel of an alt-rock mood as a crisp production allows the lead guitar sounds to really cut through a wall of noise. It’s one of those numbers that takes a little while to attune, though, since the music and vocal style are very much at odds with each other. Al Pritchard is not your typical metal vocalist – at least, not the kind such riffery would normally dictate – but rather more of the old school indie type: his performance has a much lighter tone than expected and an unavoidable English twang more than occasionally makes him sound like the frontman with the criminally ignored Tom Allalone & The 78s. If you came looking for a riff or three, then this number should appeal, but if you wanted a lyric to really grab you, sadly, you can forget it. The verse seems to throw up some fairly nonsensical rhyming couplets and it takes just as long before the chorus makes an impression. Luckily the riff never lets up; it’s genuinely hefty style impresses throughout and a brief lead gives extra edginess. If it’s only ever the music that interests you, there’s a lot to like about this track…especially where a first impression is concerned.

At the outset of ‘Soulmate’, things take a very welcome turn as the gothy keyboards that seemed a little buried during the opener get pride of place during a swooning and very cinematic intro. Swathes of sound recall the short-lived darkwave movement of the late 90s and then after a minute or so, the true spirit of The Devil In Faust rises up, sounding both huge and hugely at ease as they crank through upbeat alt-rock with some very punchy edges. Al’s natural and rousing voice sounds far more at home against this musical backdrop and the gang vocals driving the chorus are an essential ingredient. The bass that pushes forth during parts of the verse shows Jess Lomas to be more than a solid player…though not quite impressive enough to distract from the lyrics, obviously borrowed from Noel Gallagher’s personal copy of the Ladybird book of rhyming words (“It was love at first sight, telling me I was tight, for the fight”). Still, the music is absolutely cracking and if Duff McKagan’s Loaded collaborated with a modern melodic metal band from the Asking Alexandria school of rock, the end results might just sound something like this. ‘In My Eyes’ introduces acoustic elements and sweet harmonies, at first making Al sound like a cross between Tom Allalone and the Gigolo Aunts’ Dave Gibbs. This turns the band into something that’s almost within the sunny power pop sphere is most unexpected, but musically is well played. It might come as a surprise to those expecting a big riff to emerge, since that riff never really comes. There are allusions to more of a rock sound midway, but in order not to wreck a great tune, the harmonious pop carries through. Despite the odd wobbly vocal and despite playing against type, this might just be the EP’s best track.

Last up, ‘Seed’ brings back chunky rock sounds, this time including a more than a few grungy traces. A huge feature is made of Lomas’s hefty bass via a great intro, giving everything a fair amount of weight. From therein, the number doesn’t live up to its earliest promise; the resultant tune sounds like a cross between an old Hole number and something throwback-ish, or more likely Hands Off Gretel’s hugely derivative ‘Oh Shit’. A fairly terrible lyric doesn’t always work out for the best either, but a solid counter vocal on the chorus improves things no end and an old horror styled organ definitely adds a nice touch. This is without doubt the EP’s worst track, but even with its faults, there’s a feeling that it could still strike a chord with listeners who crave something retro…especially those not old enough to remember similar sounds the first time around.

‘Come Apart’ is a bit of a mixed bag. Sure, one of the tracks is a dud and the “musical CV” aspects of trying out different styles to see what sticks can be irksome, but with a couple of great tracks and one solid offering (lyrics notwithstanding), ‘Come Apart’ is definitely worth a listen if you like unfussy, heavy alt-rock. Assuming the band are able to settle stylistically, they’ll surely get better in the future. That future mightn’t be big on originality, but when there’s as much self-belief as The Devil In Faust seem to harbour, that really shouldn’t be an issue.