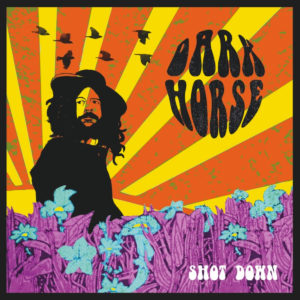 The names Matt Knee and Rosie Doonan might not be at the forefront of your mind, but prior to the launch of Dark Horse, both musicians had been fixtures on the music scene in the north of England. Matt had been drummer with Wakefield post-punkers Last Gang, while Rosie – among other things – had found herself with a much higher profile gig as part of Peter Gabriel’s orchestral shows in 2012.

Within Dark Horse, Doonan’s slightly trill vocal style is a good match for the retro pop sound and for some people, this may well prove to be the EP’s main attraction. However, as good a performer as she is, it’s the music that really counts here…and ‘Shot Down’ offers three songs that are an instant mood lifter. The band knows all about making that important first impression, too, making no apologies for front-loading what is arguably their best track.

‘Dark Horse’ (the song) begins with noodling strings, never giving too much away and then hits upon a brand of rock/pop that’s instantly lovable. A steady beat dictates an equally steady bassline and the band lurches forth into a tune that takes many cues from the T. Rex classic ‘Hot Love’, both in rhythm and carefree hazy tone. Occasionally punchier elements and strings make it different enough to sound more contemporary, but there’s a hazy 70s heart that just can’t be ignored. Doonan’s vocal is suitably uplifting and the jangling guitars are timeless – in short, this is a three minute gem; a true underground classic. The retro pop is equally in force throughout ‘Autumn’, a track that fuses Dark Horse’s pop kitsch with a Motown inspired backdrop. The tune is as multi-layered as the previous, complete with a dancing bass and measured string sounds. Its bouncing nature ensures the music is always entertaining, even though on first listen, the lead vocal isn’t quite as appealing. After hearing this a few times, however, the oddly high tones sound more familiar…and whether intentional or not, Doonan sounds remarkably like the younger Charmian Dore circa 1977.

After an incredibly strong opening pair, the title cut brings a devastatingly short workout with more of a “70s through a 90s prism” vibe, as if Dark Horse eschew their previous musical loves and instead choose to pay homage to Edwyn Collins. The bulk of the tune is sturdy, the vocals carefree (even though never as distinctive), while the main hook comes from some attentive brass as opposed to a big chorus. Sounding more like a teaser of things to come, this ends the EP in a somewhat abrupt manner…but there’s no doubt that it was good while it lasted. Excellent, even.

Just as much as this music comes with a quality as retro as the EP’s artwork, there’s still something sparkling and fresh about the three tracks on this release. These tunes are incredibly uplifting; the mixture of classic pop and soul comes across with its creators showing a real love for the style. Although far, far too short, ‘Shot Down’ (the EP) is a reminder that, for the hundreds of generic rock and indie releases that emerge on a monthly basis, it’s always worth digging for that gold.