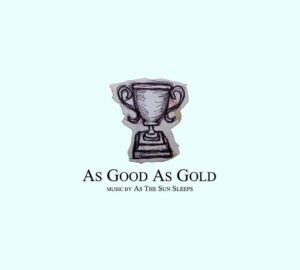 ‘As Good As Gold’s lead single ‘Beering’ wastes no time in presenting the band’s preferred style, as it doesn’t even have the luxury of an intro before introducing Joe Beck’s clean voice against a riffing guitar. “Lately, I’ve been thinking I should give up drinking”, he opines in a way most listeners should be able to relate. As the track progresses, it becomes clear this isn’t just an opening statement but also part of the chorus, so straight from the off, these guys demonstrate how they understand the importance of hooks. Moving farther into a brilliant track, the questioning vocalist also suggests “we’ve all got stories to tell”, giving this tale of reflection a greater depth, while the music shifts between a hard, pogo worthy mid pace and some full throttle muted chords that tear with abandon. Fans of the genre will certainly hear the odd melody appropriated from the blink-182 camp (‘Mutt’ springs to mind almost instantly) as well as an early Fall Out Boy bounce, but all things combined, it’s a superb opener… The feeling of moving on is almost celebratory and the resolution-themed tale seems rather apt given this EP’s January release. As far as anti-drink songs go, it certainly beats the hell out of Marmozets‘ accusatory and rather pious ‘Is It Horrible?’.

‘Florida’ gives drummer Tom Shrimpton an edgier workout as he powers through the number’s verses with a hefty and almost pneumatic style – presenting the band’s most punky offerings – but the chorus in contrast is a harmonious and melodious slab of power pop/pop-punk gold, as Joe launches into a performance that really latches onto the soaring tune, while more complex backing vocals and a lead guitar round out the sound. Some years previously, this would have been the kind of song Bowling For Soup could’ve turned into a hit. It may pull great influence from a previous pop-punk generation, but the mix of tight playing and insanely catchy melodies makes it just as thrilling as pretty much anything that’s come before, genre-wise. ‘Forever Sick’ (as the kids say) mixes a punchy riff with some very cool lead guitar work during the intro, showing James Broadbank to be a solid player. The lead guitar provides a superb melodic counterpoint to the punky rhythm that ensues and by the time the vocals kick in – again, a great exercise in melody – the tune really takes off with attitude, pace and more cool guitar. The general speed suggests the main hook won’t be as big – and in ways, it isn’t – but musically, these guys are on top form. The use of melodic guitar leads really helps lift an otherwise familiar pop-punk backdrop; on the moments where the bass cuts through, it does so with a huge sound and the Fall Out Boy homages that occasionally shine through are also a welcome touch.

A ringing guitar and a New Found Glory/Bowling For Soup sense of the poppy put best foot forward during ‘What Matters Most’, a melodic rocker with a slight punk edge that really hits home how good these guys are at song writing. Without the fast pace and muted riffs to hide behind, it’s down to how well the song stands up. With a huge chorus and a chunky rhythm, As The Sun Sleeps prove they’re about as good as it gets and the song has the capabilities to win over listeners before reaching its faster climax. It isn’t especially original, but it doesn’t have to be; the feeling and melody carry everything admirably and by the time the call and response vocal and heavier drums push the tune over the finish line, it’s another job well done. It doesn’t hit the heights of ‘Florida’ – this EP’s finest three minutes – but then, that track is rather special. With a barrage of guitars leaning towards alt-rock at first, ‘Nothing But Net’ is home to a great tune which adds a touch more emo to the by now familiar sounds. Its verses pack a punch with the guitars firmly out front, but it’s the chorus where everything settles in, thanks to another big hook, a dual vocal and plenty of bounce. By the time the music subsides and multi-tracked voices deliver that hook one last time in an a cappella fashion, there’s no question this EP has been not just hugely enjoyable, but also filler free and a cut above the band’s previous works.

Blending elements of Fenix TX, early (ie: good) blink-182 and a hefty dose of ‘Sticks & Stones’ era New Found Glory (though thankfully without the hideous and overdone autotune), this fourth release from these Swindon pop-punkers may often tread a familiar path, but the songs are brimming with positive vibes and the spiky elements are tempered by great playing throughout. In terms of style, this is a release that just cannot be faulted – grab it now!

Visit the As The Sun Sleeps Bandcamp page here.