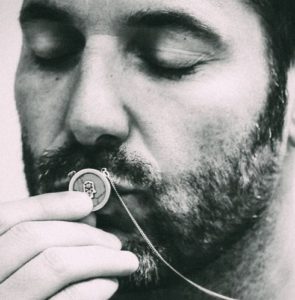 Written across five continents, Zach Ashton’s fifth album – as it’s title very much suggests – is somewhat of a musical travelogue. Introspective, mellow and possessing an old spirit, these songs come across like the ultimate late night, almost smoky listen, with the Mexican-born singer-songwriter recounting experiences with the people and places that inspired him and seemingly on occasion left him slightly angsty. It’s one of those records that creeps into the subconscious slowly – an affair where the music eventually leaves an indelible mark, where once it just felt like pleasant listening material. Like the best of the quiet Josh Rouse or the less obtuse Ryan Adams, these songs come with a timeless feel.

With little more than an acoustic strum at first, the wordy ‘Someday’ represents the general mood of the album in a perfect three minute nugget, with Ashton delivering his lyrics in the guise of a very measured storyteller. The gut feeling that he could be the twenty-first century Cat Stevens is very much reinforced by his slightly woozy delivery, but once the rest of the band chime in, the performer’s own style becomes more evident. The intermittent bass is warm, coming in waves like wafts from an open fire, an electric guitar drops by almost half-heartedly with a time worn alt-country twang. Like some of the material on Mason Summit’s 2016 disc ‘Gunpowder Tracks’, while we’re always aware of the more contemporary elements, in actuality, the bones of this track could have been laid down some four decades earlier. Even with a full band presence, Ashton still draws in the listener, dealing out words and parts of a tale with a real presence.

Just as lovely, the slow waltz of ‘If You Would’ showcases a very natural vocal against some old school keys and brushed drums, while – once again – the warmth of the bass cuts through everything. Tunes so relaxed rarely sounded so full…and then strings make it even better, with a combination of both smooth and pizzicato sounds. The vocal in many ways seems like the least important part of this track, but there’s very much a sense that Ashton feels comfort in this musical cocoon and as his voice comes through, slowly, measured and almost breathy in its delivery, his old soul cannot be hidden. Taking a step even farther back towards the easy vibe that cuts through so much of the material, ‘Borderline’ presents a measured bassline, over which various clean guitars pierce the arrangement with a country twang whilst occasional bell-like percussion conjures memories of the underrated Josh Rouse circa ‘Nashville’. Ashton’s fuller vocal is perfect, as he implores for someone to “show [him] the way through”, the last word repeated as a hook, evoking the feeling of a loss of direction even more. As he tells that “there’s gonna be a war at the borderline”, the ache in his voice isn’t so much one of angst, but more of acceptance that the world we live in is set to explode. Somehow, though, the lovely tune makes us forget any turmoil and takes us away to a place of our own imagining…as all good music should.

The equally mellow title track meanders, aided very much by an electric piano and questioning vocal. The tone is occasionally reminiscent of some of Ben Harper’s most downbeat material, though as before, Ashton has a way about him that somehow doesn’t make this feel like a mope-fest – his voice very high in the mix and lending this number an already familiar tone – while the late 50s inflected ‘Barcelona Nights’ is genuinely uplifting with the aid of a muted rhythm guitar and almost salsa-ish flair. With the protagonist painting a very vivid picture of the harbours and bars he’s experienced first hand, it’s a number that’s almost impossible not to love. In fact, if Ashton’s easy style and ability to convey images with such a natural narrative hasn’t won you over by this point – this song being one of a few definite highlights – it’s safe to say this album just isn’t for you. The old country waltz of ‘If You Would’ comes back with a vengeance on ‘Shooting Stars’ and here, Ashton takes a vocal sidestep and sounds like Dave Matthews reinterpreting country music… Questions of a wobbling relationship surface, alongside “dreams of an open road” and as the final lyric implores “struggles, won’t you give me peace for a little while”, there’s also a feeling that this part of the journey hasn’t been quite as smooth as anticipated. The music, however, is flawless – it’s country-folk smoothness possessing a class that’s somewhere near a stylistic best. With the acoustic guitar augmented by almost Calexico-ish spaciousness in the guitar flourishes at first, before a huge bass fills so much of the available space, there’s always much to please the ear, even before an easy organ and the sweeping style of the arrangement wins out. With the backing band sounding at somewhere near their best, this track is a vital piece in this album’s musical puzzle.

‘The Ceiling’ revisits a stripped back country folk vibe, which doesn’t necessarily add much new to the album, but has a very optimistic lyric concerning love, stretching out and holding your love aloft for all to see – it’s nice, but pales in comparison to the rest of the disc – but nestled somewhere near the end of this enjoyable journey, on the other hand, comes another genuine stand-out. ‘In Your Eyes’ presents an imploring voice set against sparse piano chords and very little else. The stripped down approach and natural mix almost makes the piano’s pedals audible at a couple of points, while the voice – that voice – steeped in sadness, rarely sounded better. This, ‘Barcelona Nights’, ‘Shooting Stars’ and ‘Someday’ are enough to make ‘People & Places’ worthy of checking out.

The combination of Ashton’s laid-back vocal style and warming musical arrangements makes ‘People & Places’ a thoroughly enjoyable listen. Clocking in at just thirty six minutes, this is very much an exercise in quality over quantity and even though it might seem as if Ashton has more tales to tell, he’s wisely scaled everything down so we get the essentials. A masterclass in relatively stripped back song writing, the result is both one of 2016’s unexpected gems and an album that’s really worth investing some precious listening time.