Vocalist Zac Buzzkill is understandably in an extremely positive mood: “Let’s say that January 7, 2017 will be a night I never forget.” That night, The Buzzkills are set to play a one off show as The Twenty Sevens, playing a set of covers whilst joined on stage by one of their heroes and chief influences.

“It’s been a really busy time”, he says. “We released the ‘Quick and The Cheap’ EP in the spring and were already working on a new sixteen track recording when the invite came through for this gig. We put everything else on hold. The “winter tribute shows” in St. Louis are a big thing in the punk calendar every year. The event is held at FUBAR, the primer venue for punk-pop in St. Louis, which is a classic punk dive bar in the best way possible. For these shows, five of the top punk bands in St. Louis make up a fake name and perform a ten song set of a classic punk band. For example, this year, St. Louis punk rock staples Horror Section will become Love is Dead is and play a set of Mr. T classics. Our booking agent agent Cody Mathis gave me a call and asked if we would like a spot on this year’s bill. I spoke three words, ‘Screeching Fucking Weasel’…”

Zac couldn’t have been more definite. No other bands were considered for coverage during the Buzzkills set.

“I’ve loved them since I first heard them on a seventh grade trip in 1997. We were in Washington, DC and I visited my first hipster record store. At that time, the closest thing I had to a legitimate punk record 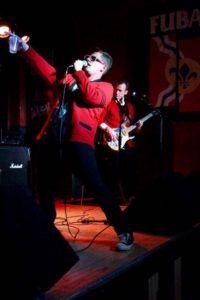 was blink-182’s ‘Dude Ranch’. As I sifted through the selection of bands I had never heard on the radio or seen on MTV, I ran across an album that caught my eye. It was Screeching Weasel’s ‘Anthem For a New Tomorrow’. I purchased the CD with great pride and received a nod of affirmation from the record store clerk. As we returned to the tour bus I popped my new purchase into my Sanyo Walkman – there was no way my family could afford the Sony – and my mind escaped to a place where suddenly the world made sense in a way that it never had before. From that moment on I was hooked on the independence, honestly, rage, humor, and beautiful truth in punk rock. Every stop on the trip became nothing more than an excuse to purchase more Screeching Weasel albums. Ben Weasel, John Jughead Pierson, Dan Vapid and Dan Panic became my friends, my mentors, my speakers of truth and my closest friends. Instead of coming home from the trip with a treasure trove of tiny national monuments I came home with a bunch of Screeching Weasel albums. Dad was not impressed but seemed happy that no rap was involved!”

The fact that Zac and the rest of his band are about to perform a set playing tribute to the band who’ve influenced them most directly is a nervy experience enough, but they decided they really needed to raise the bar if they were to really make it a night to remember. “As The Radio Buzzkills, we’ve been playing Weasel songs in our sets here and there for years, but I knew we had to do something special for The Twenty Sevens’ show. The ideas ranged from getting naked to giving several large bags of ice to the crowd. I even considered letting a woman in the audience come up on stage to punch me in the liver.”

This last idea might seem odd to those unfamiliar with Screeching Weasel’s history but, in 2011, frontman and co-founder Ben Weasel punched a woman on stage after being pelted with ice. The rest of the band – at this point, not much more than a pick-up band and sadly lacking other founding member John “Jughead” Pierson – handed in their resignations at the end of the show. When Weasel re-formed the band without Jughead two years previously, Pierson was understandably upset. After the events of 2011, it seems he’d had a lucky escape.

Zac continues: “After a few silly ideas, we thought it would be cool if we invited Jughead to play with us at The Twenty Sevens’ show, thinking nothing would come of it and it would be one of those wasted day-dreams. Within minutes, he replied. The answer was yes.”

With the stage set, The Radio Buzzkills will be joined by a Screeching Weasel legend and The Twenty Sevens take the stage together for one night only.

With the Weasel catalogue being so vast, how could they decide on just ten songs? Zac decided that Jughead would be the defining factor. “As soon as he jumped aboard, we offered Jughead the opportunity to pick the entire set, but he had us pick eight and he chose the other two. I picked songs with classic Jughead leads, like the song ‘Punkhouse’ for example. How can you have Jughead in the band and not play ‘Punkhouse’?!” 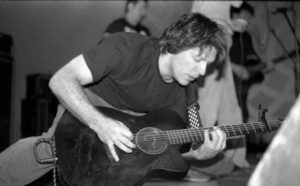 Jughead is similarly enthused by this one off set. “I occasionally get offers from bands to perform a few shows with them, but this is the first time that I will be in a cover band of my own band! That was surprising, but the idea is also pleasantly humorous and worthy of exploration. As I get older I find it more difficult to commit to finding new musicians to play with and to front a band. I always seem to be the manager and that’s draining over time. It’s nice to be able to walk into a situation and just have to relearn songs and to have fun. I know The Buzzkills are passionate enough to pull this off. It is an honor to be respected and appreciated, plus I get to keep up my chops, which – believe me – need practice. The Buzzkills are stoked that I wanted to do this, so… why not?! The 27’s will beat the Shotdowns for the shortest time I have been in a band!”

In a final word on their chosen set for the night, Zac adds: “There are a ton of other Screeching Weasel songs we like, but we’ve tried to stick with a Jughead-centric set…full of his classic leads. We’ve also tried to focus on some of the Weasel rarities, so some of the “hits” like ‘Veronica Hates Me’ or ‘Dingbat’ didn’t make the cut. I’m sure hardcore Weasel fans who are there on the night will appreciate it. Also a local tattoo parlor is doing 27 tattoos for $27 the night before the show. That’s funny!”

The Twenty Sevens play their one and only gig at FUBAR, St. Louis on January 7th 2017.

Read a review of The Radio Buzzkills’ EP and take a listen here.